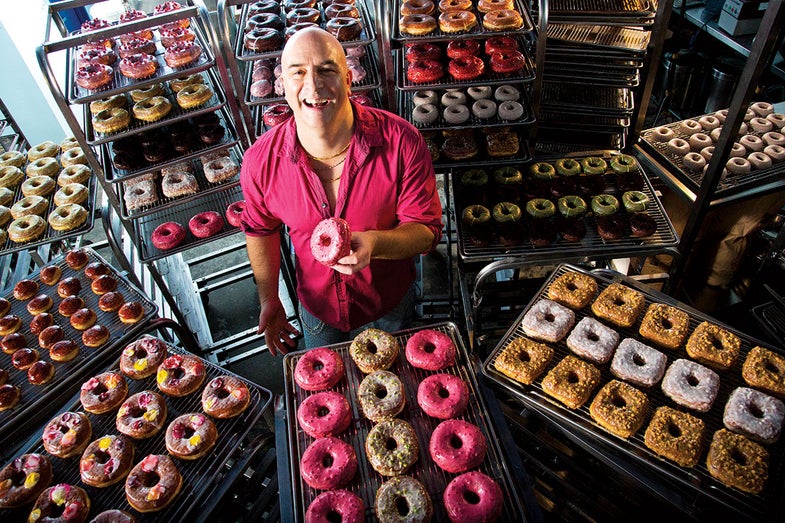 For much of their history, America’s donuts have been a pedestrian food, the provenance of chain bakeries and coffee shops. But in the past 15 years, a fried-dough renaissance has been underway. Donut artisans, dreaming up inspired flavors and investing in high-quality ingredients, have been popping up all over the country. One pioneer is Mark Isreal, owner of the Doughnut Plant in New York City. Since 1994 he has been handcrafting varieties as alluring as roasted chestnut; fresh coconut cream; and the burnt-sugar-glazed custard-filled creme brulee using organic and locally sourced ingredients. Isreal rotates flavors as the fruits he uses for his glazes go in and out of season. He even has flour milled to his specifications, all in the pursuit of the perfect sinker. Such innovations have paved the way for scores of newfangled shops that are taking the donut from humble to haute. At the year-old Federal Donuts in Philadelphia, James Beard Award-winning chef Michael Solomonov offers donuts fried to order, showered in creative toppings such as vanilla-lavender sugar.

Fōnuts, a baked-donut specialist in Los Angeles, is helping donuts shed their unhealthy image with vegan and gluten-free options, in trendy flavors such as salted caramel and strawberry-buttermilk. Around the time that Isreal started out, donuts were also appearing at some of America’s finest restaurants. In 1994 the chef-restaurateur Thomas Keller paired warm cinnamon-sugar brioche fritters with a cappuccino semifreddo in his now-iconic “coffee and donuts” dessert at the French Laundry in Yountville, California. In New York City, composed desserts such as pastry chef Jacques Torres’ cream-filled bomboloni at Le Cirque 2000, and pastry chef Karen Demasco’s buttermilk donuts with assorted dipping sauces at Craft, expanded on the notion that this is a comfort food worth elevating. Donuts have even attracted the avant garde treatment. At the experimental restaurant Moto in Chicago, former pastry chef Ben Roche made a soup by pureeing glazed donuts. Unlike chain stores, which make their donuts from a mix, these restaurants and new wave shops make theirs from scratch, which, as it turns out, is not so newfangled at all.

See more stories, tips, and techniques from our special feature on donuts »