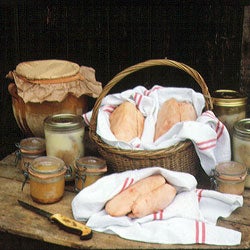 Sydney Smith, the 19th-century English cleric, once defined heaven as “eating…foie gras to the sound of trumpets.” For me, you could hold the trumpets. Much as I adore caviar and white truffles, foie gras is the extravagance I crave most. Not, you health cops, because it’s the most fattening of the three. I love it best because it’s my madeleine. Along with Romanesque cathedrals, foie gras was my first big discovery when I went to France as a kid. I never take a single silken bite without thinking back to the early 1950s, when I thought all liver came from calves and all cathedrals were Gothic. Foie gras makes me feel young again, in other words. And it makes me feel, in the immortal words of Bob Strauss, the Texas politico, like “a rich sumbitch”.

People have been nuts about foie gras—it’s pronounced “fwah grah”, and means “fat liver”—since antiquity. Egyptian paintings from 2500 B.C. show farmers holding geese by the neck and force-feeding them balls of grain. The Romans gave their geese figs, to obtain what they called iecur ficatum, or liver with figs—and the modern Italian word for liver, fegato, derives from the Latin word for fig, not liver. According to several sources, the Romans brought flocks of geese from Picardy in northeastern France to their capital, herding them across the Alps on foot. Waverley Root ridiculed that tale as something out of Mother Goose—or to be more precise, out of Alexandre Dumas, whom he dismissed as “a slipshod writer” who had misread Pliny the Elder.

To make foie gras today, selected birds—Toulouse or Strasbourg geese or moulard ducks, which are a cross between Muscovys and Pekins—are kept in a confined space at a constant temperature and fed grain through a funnel jammed down their gullets. The geese develop livers weighing up to two and a half pounds, instead of a few ounces, and the ducks yield livers of a pound and a half or so. This drives the animal-rights people to distraction, or at least to hyperbole. Several years ago, an official of People for the Ethical Treatment of Animals was quoted in the Washington Post as saying “Every country has its brand of cruelty. In England, it’s foxhunting. Italy is veal central. And in France, they stuff geese full of grain until they explode.”

The best foie gras used to be pretty much confined to France; the American lover of the stuff had to either travel there (or to a nearby country) or be satisfied with something in cans or jars. Today we are more fortunate. Though the bacteriophobic United States still forbids the importation of foreign foie gras in raw form, superb duck foie gras is produced in upstate New York. Goose foie gras, more difficult and twice as costly to make, is not yet produced here on a commercial basis.

Foie gras is turned out in Israel, Canada, Poland, and Hungary, even Madagascar, in addition to France and the U.S. But it is in France, and especially in Alsace, and in Perigord and Gascony, that something of a cult has grown up around it. Winter is the peak season for goose production, and that is when you find the birds and livers proudly laid out in the weekly markets in southwestern towns such as Eauze and Perigueux. Consumption soars at the same time; eating foie gras has become a traditional holiday treat, a centerpiece of the French celebrations on Christmas Eve and New Year’s Eve.

Goose liver (foie gras d’oie), more traditional than the duck variety and more opulently rich, is preferred by many chefs if they plan to serve it cold. But duck foie gras (foie gras de canard) holds its texture and its flavor better when cooked. Jean-Louis Palladin, who used to cook at a Michelin two-star restaurant in Condom, in the heart of foie gras country, says that the difference between the stuff he used in the old country and what he buys here in the states is “minimal”.

Chef Andre Daguin is considered the high priest of foie gras in the French southwest—so it seems fitting that his daughter Ariane has put American foie gras on the map. Her firm, D’Artagnan, Inc., of Jersey City—founded in the ’80s in a disused meat-packing plant—doesn’t raise its own ducks, but distributes livers produced by Hudson Valley Foie Gras in the Catskill Mountains, an hour north of New York City. Selling millions worth of foie gras and other duck-based products each year, they have barely scratched the surface. The business is not problem free, however. On a sweltering day in August, they complained that the birds were going through a rough patch. “They sweat,” he said. “They have the audacity to sweat, and they lose fat instead of turning it into bigger livers!”

When the great Fernand Point prepared foie gras at his La Pyramide in Vienne in the old days, he simply marinated it for 24 hours in port, armagnac, salt, pepper, and nutmeg, put some truffles in the center, wrapped it in a thin cloth coated with chicken fat, and poached it gently in a bain-marie. No one else’s foie gras has ever tasted quite as good as Point’s—though others certainly try.

When it is sauteed—becoming crisp on the outside and puddinglike on the inside—foie gras is transformed. And in this form, it seems to go with almost anything, as long as there is some acidity or salinity involved to cut its inherent richness—coarse salt, capers, salsify, plums, arugula …

Wolfgang Puck has combinec foie gras with pineapple and cinnamon; Jean-Georges Vongerichten has teamed it with mangoes. But I once ate a horrid preparation of foie gras at, of all places, Andre Daguin’s Hotel de France: foie gras with blackberries. The gritty seeds of the fruit spoiled the liver’s texture, which is a lot of what foie gras is about. DiMaggio sometimes struck out, and so, that time, did Daguin.

The lily can be gilded: Michel Guerard, the brilliantly inventive chef, used to make a pot-au-feu of vegetables and foie gras, in which the liver partially melts into the bouillon. Marc Meneau, another three-star practitioner of the chef’s art, invented sinful little deep-fried beignets, crisp on the outside with liquified foie gras in the center. Not to be outdone, Marie-Claude Gracia, a fifth-generation chef, created the mother of all pasta sauces: slices of foie gras and morels in a reduction of creme fraiche, ladled over tagliatelle.

Unhealthy, you say? Cholesterol city? Not according to a ten-year study by the French National Institute of Health and Medical Research, completed in 1991, which found that southwestern France—where they eat lots of fat livers, and drink lots of red wine and armagnac (and smoke like chimneys)—had the country’s lowest death rate from cardiovascular disease.

But even the French don’t argue that foie gras is the most easily digestible thing in the world. Don’t eat too much of the stuff, my advice is, and certainly don’t eat it too late at night. On the other hand, it is said that Bismarck used to drink a glass of milk and eat a slice of foie gras to cure his insomnia. No wonder they called him the Iron Chancellor.