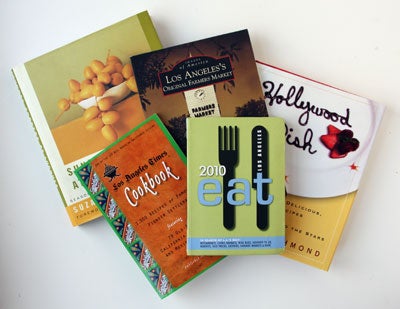 Compiled by a group of passionate LA writers and eaters, this reliable, easy-to-use guidebook is packed with tips on the city’s best offerings, from taco trucks and burger joints to specialty markets and splurge-worthy restaurants.

Akasha Richmond draws on her experiences as a chef-caterer to the stars (she was once Barbra Streisand’s private chef and now caters the Oscars and Emmys) in this entertaining read, which is equal parts cookbook and Hollywood chronicle. (Who knew, for instance, that Clark Gable was crazy about Caesar salads or that Woody Harrelson is a die-hard raw-food advocate?)

Thoroughly researched and full of archival photographs, this book charts the evolution of LA’s oldest and most famous outdoor market, which is located on the land where former dairy farmer Arthur Fremont Gilmore struck oil in 1900. After 40 years’ worth of drilling on the site, the land was rededicated to furnish farm-fresh produce—accompanied nowadays by a host of delicious street-food options—with a permanent home in the heart of Los Angeles.

Originally published in 1905 and reprinted in 2008, this slim volume immortalizes the winning recipes submitted to the Los Angeles Times from 1902 to 1905 by home cooks during various cooking contests. Today, it’s a look at the city’s early Spanish- and Mexican-influenced dishes, like alligator pear salad and chopped-beef chili con carne.

Since 1998, chef Suzanne Goin has been serving family-style Sunday dinners at her West Hollywood restaurant Lucques; those recipes, for everything from ricotta gnocchi with chanterelles to grilled duck breasts with roasted grapes, sum up what we love about her food—flavorful, colorful, and seasonal, it’s rooted in classic technique, but it’s refreshingly free of fussiness. —The Editors