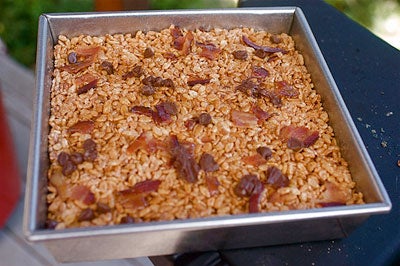 There is a new trend afoot, and we’re both intrigued and mystified by it. We call it sweetmeats, but others might call it gross: we’re talking about meat desserts. This particular phenomenon has manifested itself in countless ways, including bacon peanut brittle (our favorite is the Redhead’s, which we could eat by the fistful), chef Becky Selengut’s bacon and Rice Krispies treats, Humphry Slocombe’s foie gras and prosciutto ice creams, Vosge’s bacon chocolate bars, and Roni-Sue’s bacon-flavored “Pig Out” gift packages. You can even make your own cashew bacon brittle at home. We’re not sayin’ it’s bad—in fact some of it is darn good. But unlike chocolate-covered coffee beans, chocolate-covered bacon is still not something we’d want to face for breakfast.