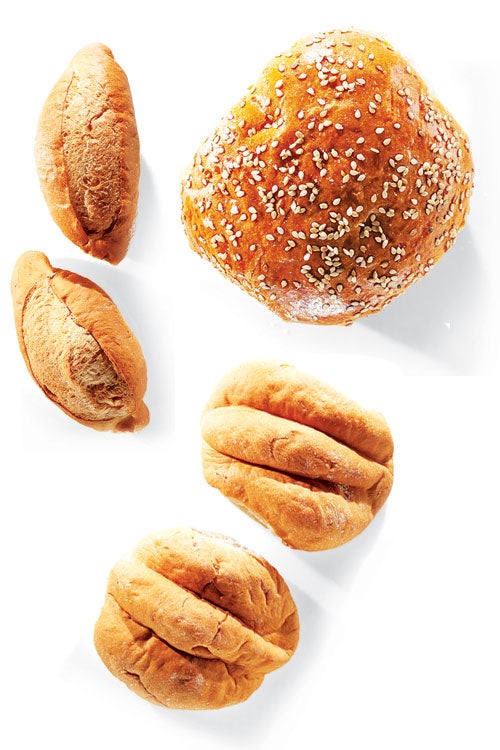 Bread is as much a part of the food culture of Mexico as tortillas. It’s almost always on the table, but it’s very rarely made at home. Most Mexicans buy their bread at a panaderia (bakery) or supermarket. There are hundreds of regional loaves, sweet breads, and holiday breads like the ring-shaped rosca de reyes, baked for Three Kings Day each January. But for everyday eating, the following three types of rolls are the ones you’ll find throughout Mexico and in Mexican groceries and bakeries in the U.S.

Bolillo (top left) This eight-inch-long, football-shaped roll is crusty on the outside and soft on the inside, like a French baguette. It’s split and topped with refried beans, melted cheese, and salsa to make molletes, and it’s often used to make tortas, or sandwiches. When a sauce, such as mole poblano, requires a thickener, stale bread is often called for in the recipe, and bolillos have a neutral flavor that makes them ideal for this purpose.

Cemita (top right) A specialty of Puebla now found across Mexico, this five-inch, round, egg-washed bread topped with sesame seeds is similar to brioche, only drier. In most parts of the country it is just another bread, but in the city of its origin the fluffy roll is beloved as the foundation for the cemita poblana, a sandwich of meat and cheese topped with avocado, onions, chipotles en escabeche, and the pungent herb called papalo.

Telera (bottom) Popular in Mexico City, the crust of this ridged, seven-inch roll is softer than that of bolillos, but inside it’s firm and dense. A sturdy vessel, it’s the bread of choice for making tortas.