A marriage is made over a steaming bowl of soup. 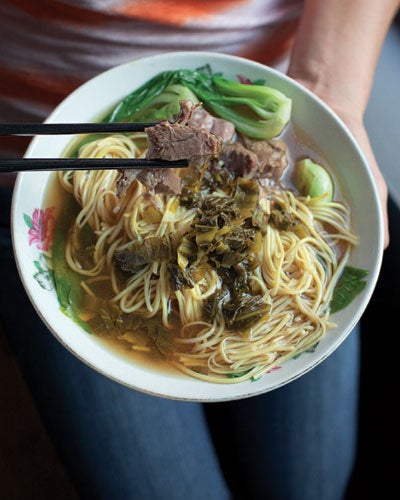 Lao Zheng was a gambler and a crank. But at his popular hawker stall near Taipei’s Yong Kang Park, he cooked bouncy noodles in a fragrant stock with beef so tender that it could be cut with chopsticks. It was there, in 1974, that my mother met the man she would marry five years later.

On that night, the lightbulb over Lao Zheng’s stall had flickered out, and my father, who was waiting for noodles, offered to run down the street for a replacement. When he returned, his noodles were ready for him, on the house. Noting that my mom had waited patiently in the dark while other customers had wandered off, Lao Zheng rewarded her, too, with a free bowl. The three strangers became friends.

My parents returned to the stall often. Then, one day, Lao Zheng disappeared. Some said he’d retired, others that he’d sold his stall to pay gambling debts. Eventually, my parents discovered that a couple by the last name of Luo had purchased his recipe. Today, the shop that they opened, called Yong Kang Beef Noodle, is one of Taipei’s most famous restaurants. The Luos were avid pupils of the old man’s techniques. They’d learned how to introduce specific ingredients at different cooking intervals, to slice the shank into tender wedges against the grain, and, as Lao Zheng did, to keep the recipe a secret.

When I was young, we ate at the Luo’s shop often. After we moved to the States, in the early 1990s, my mom crafted her own soup, matching the flavors and textures she remembered as best she could. Now, when I make my own version, I think of the shop back in Taipei, the old man who started it all, and the love entangled in every bowl.

This article was first published in _Saveur in Issue #134_