In France, clafoutis is taken seriously for what it is, and isn't. 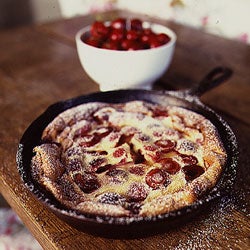 If you mix plenty of unpitted black cherries into what may best be described as a slightly thickened crepe batter, you will have the makings of a traditional clafoutis limousin—a type of batter cake from the farm country of southern central France. The recipe is old but not ancient, probably dating from around the 1860s. The unusual name (sometimes spelled clafouti) comes from clafir, a dialect word meaning “to fill”. And fill it does—not least because it’s so good that one’s tendency is to ask for seconds and thirds. According to Larousse Gastronomique, when the Academie Française defined clafoutis as a “sort of fruit flan”, inhabitants of Limoges—capital of the Limousin region—protested, forcing the institution to change the definition to the more acceptable “cake with black cherries”. Black cherries are the meatiest, juiciest, and sweetest of all cherries—and they’re left unpitted because the pits are thought to enhance the flavor of the batter with a perfume faintly reminiscent of almonds. Whole cherries are also less likely to bleed into the batter.

A perfect clafoutis has a deep golden brown crust on both the bottom and the top. And the only way to achieve this is to bake it in a sufficiently hot oven. At too low a temperature, the flour separates from the rest of the batter, settling at the bottom of the pan and leaving a pale custard behind.

Though black cherries are the classic addition, clafoutis is made today with all kinds of fruit. In the Auvergne, next door to the Limousin, where clafoutis is known as milliard, it may contain cherries, grapes, red currants, or prunes. My grandmother Jeanne Barbet makes milliard with prunes soaked in armagnac, which is probably a taste she acquired from her Auvergnat husband. It’s admittedly potent, but it’s also very good—dessert and digestif all in one.