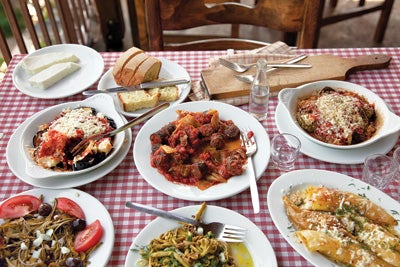 I must have been 18 when, on a trip to the northern city of Thessaloniki, I first tasted the dish that is now my favorite meze, or small plate: plump, batter-fried mussels with a crunchy exterior and a soft, juicy core, pierced with toothpicks and arranged around a dollop of thick garlic sauce. The dish was a local specialty, and each mollusk was complex and powerful: a little meal unto itself. Years later, when I started entertaining at home, this was the meze that my friends hankered for, the one that always got finished first.

Mezedes, as the dishes are collectively known (there are variations on the word throughout the Mediterranean), are essential to the Greek way of eating. Served as snacks or appetizers in homes and tavernas, they make a convivial beginning to a meal. They’re also designed to accompany drinks, as it’s frowned upon here to bend an elbow on an empty stomach. (As long as you’re eating, it’s safe to order another round.)

Greeks have been eating this way since ancient times; the third-century author Athenaeus, for instance, writes of meals that centered on “a large tray on which are five small plates.” But tavernas that feature extensive and elaborate meze spreads are a relatively new phenomenon; these places were likely inspired by the popularity of traditional coffee bars in cities like Thessaloniki and Volos in northern Greece and by the legendary ouzo bars of Lesbos (ouzo being Greece’s aniseed- flavored liquor), where cooks prepare impressive spreads with local vegetables and with the day’s catch. Traditionally, such places would also serve one-pot meals of stewed beans, greens, and meats, since there is no difference between a meze and a main course other than the size of the plate. “Only soup can’t be made into meze,” my grandmother used to say.

Mezedes can range from humble to fancy. The simplest—oil-cured olives, feta sprinkled with oregano, pickled peppers—are known as pikilia, which means “assortment,” and they usually arrive free of charge with any order of spirits, wine, or beer. Some mezedes are regional (like the mussels from Thessaloniki), while others are seasonal (like the fava beans and chickpeas you’ll see diners shelling at their tables in spring). Then there are the classics you’ll find always and everywhere: grilled octopus; garlicky dips served with bread; the rice-and-herb-filled grape leaves called dolmades; cheese-and-tomato-laden baked dishes called saganaki; and the ubiquitous tiny meatballs known as keftedes. By convention, one starts with the cold vegetables, spreads, and pickles, continues on to cold seafood, and finishes with the fried and warm foods. Whoever has “the quickest fork,” as the saying goes, succeeds in tasting them all.