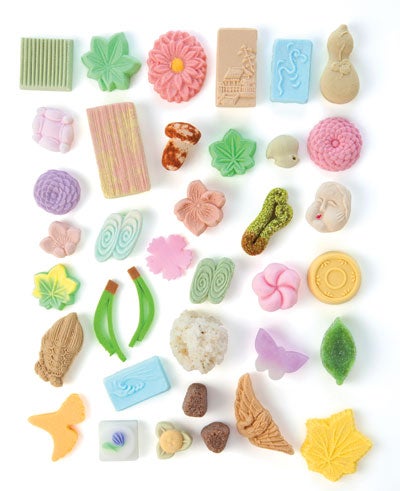 I first saw higashi in a Tokyo food hall, and I was blown away by these individually tinted sugar and rice-flour confections: exquisitely wrought birds and flowers, representations of water and mountains, tiny turtles and temple tableaus. Popular hostess gifts, they’re an integral part of the Japanese tea ceremony, meant to be eaten, not in tea, but alongside it, to offset the bitterness of the drink. Though the ceremony dates back to the 15th century, higashi came later. In 18th-century Japan, the sugar treats were a luxury enjoyed by the imperial family and the upper classes, made in shapes that celebrated the seasons. Still today, just before spring bloom, you might serve higashi shaped as cherry buds. A week or so later, your higashi could resemble blossoms. Though the confections are rarely found outside Japan, the American company Chambre de Sucre imports Japanese sugars as delicately made as higashi. Pink and white mini flowers, dark-brown sugar balls, chunky amber and rainbow crystals, and ornamented orbs and cubes, they’re made by a 268-year-old company that has been hand-making the sugars since the early 1800s. They’re perfect for a tea party or to drop ceremoniously into champagne cocktails.