In Atlanta, the spirit of a Southern legend lives on. 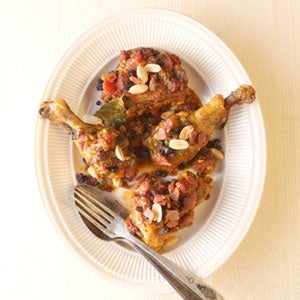 Curried chicken gets dressed up with plenty of rich vegetables, spices, and a crunchy peanut garnish. André Baranowski
SHARE

The last time I saw the famous Southern cook and author Edna Lewis, four years ago, she was seated with her characteristic poise at a table in Watershed, the Atlanta-area restaurant. Scott Peacock, the chef, came out of the kitchen frequently to check on her, making sure that she was happy with the grits, cooked with pungent shrimp paste. “Before Miss Lewis, I didn’t know anything about shrimp paste,” said Peacock, whose cooking is permeated by all the things he learned from Lewis, a Virginia native with whom he traded culinary lore for more than 20 years. The extraordinary relationship between Peacock and his mentor, an African-American woman more than twice his age whom he befriended in 1989 and cared for until her death, 17 years later, shapes—indeed, defines—the excellent Atlanta restaurant that has become her legacy. On Tuesdays, you can taste Watershed’s exquisite fried chicken, soaked in saltwater and then buttermilk (“That’s me,” Peacock says, giving credit to his upbringing in Alabama) and fried in butter and lard with a chunk of country ham (“That’s Miss Lewis”). On any day, you can have the sharp house-made pimento cheese, the sumptuous salmon croquettes, and the curious and wonderful Southern staple called country captain: chicken braised with curry, currants, and onions. Seated with a slice of hummingbird cake in Watershed’s convivial dining room, amid families and friends, I revel in the knowledge that Lewis’s life work lives on in such a welcoming and nourishing place. —Christiane Lauterbach, restaurant columnist for Atlanta magazine.