LA's Koreatown, near Downtown, is a vibrant immigrant enclave. 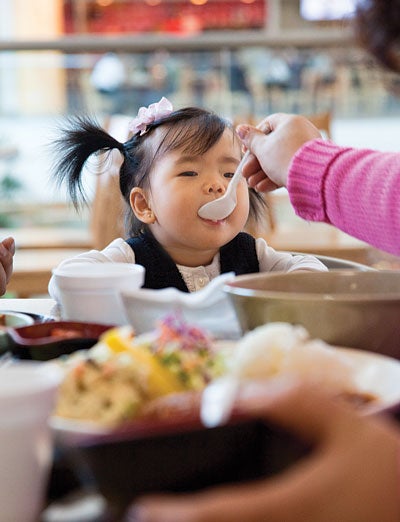 LA’s Koreatown, near Downtown, is a vibrant immigrant enclave: a rocking, all-night neighborhood of clubs and bars, of Korean driving ranges and Korean herbalists, karaoke rooms and supermarkets, movie theaters and bustling food courts (like the one in Koreatown Plaza, on South Western Avenue, pictured) that could have been plucked straight out of Pusan. And then there are the magnificent restaurants, most of them specializing in a single dish or two. Dae Bok (2010 James M. Wood Boulevard; 213/386-6660) serves practically nothing but its signature pufferfish, sliced and tossed into a stew with vast quantities of chile and garlic. Ham Ji Park (3407 West Sixth Street; 213/365-8773) is a pork specialty restaurant known for its grilled pork ribs and a spicy stew of pork neck and potatoes. Bulrocho (955 South Vermont Avenue; 213/383-0080) is famous for its nourishing goat soup. Kobawoo House (698 South Vermont Avenue; 213/389-7300) has a larger menu, but everyone comes for the bossam, cabbage-wrapped steamed pork belly served with daikon kimchi, pickled jalapeños, and baby shrimp. In the mood for noodles? Ma Dang Gook Soo (869 South Western Avenue; 213/487-6008) is loved for its Korean knife-cut noodles in a savory anchovy broth. Korea has its own style of sashimi, thickly cut and served in large portions often accompanied by pungent fermented-bean sauces; try Korean sushi and al bap, a bowl of sushi rice topped with different kinds of roe, at A-Won (913 1⁄2 South Vermont Avenue; 213/389-6764). And while two out of three restaurants in Koreatown claim to specialize in barbecue—LA-style Korean short ribs is a dish that has reverse-emigrated to Seoul—almost everybody agrees that the best in town is at Park’s BBQ (955 South Vermont Avenue; 213/380-1717), where the beef is Wagyu, the banchan (small plates) are first-rate, and the pork belly is richly marbled. —Jonathan Gold, food critic for LA Weekly and author of Counter Intelligence: Where to Eat in the Real Los Angeles (LA Weekly Books, 2000)