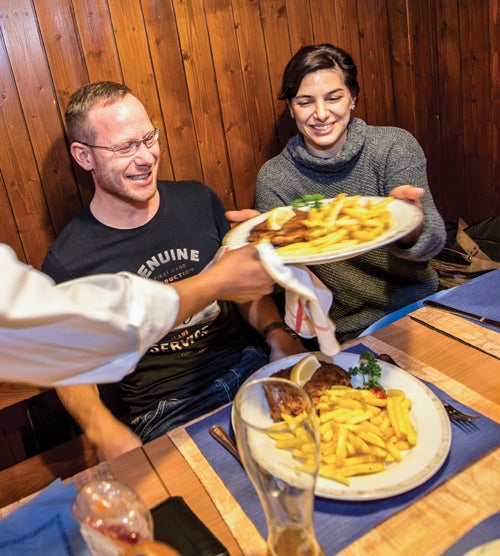 Zurich’s working-class taverns often plate up Swiss comfort foods like rosti, kalbsbratwurst, and raclette melts. But they are especially beloved for their generous portions of cordon bleu, made with fried cutlets of veal or pork (rarely chicken), and served with a lemon wedge, fresh greens doused in creamy dressing, and a heap of pommes frites.

While some taverns are being replaced by contemporary eateries, there are still a handful known especially for their cordon bleu. You can enjoy the dish in a variety of ways—stuffed with prunes, Gorgonzola, even sundried tomatoes. But most of us prefer the classic version, made with ham and a melty cheese like Emmentaler or Gruyere. And one of my favorite cordon bleu dishes, by far, is served at Rheinfelder Bierhalle.

Located along a cobblestone street in the city’s Old Town neighborhood, this comfy wood-paneled tavern serves a pork version called Jumbo Jumbo, which edges off both sides of the plate, and oozes cheese when its golden crust is cracked. Here, the dish is eaten at communal tables, and washed down with mugs of Feldschlosschen lager beer. Owner Walter Schob tells me he sells about 2,700 plates of Jumbo Jumbo each month.

I have long tried to figure out why cordon bleu is so popular in this city, but its origins are elusive. While many associate the dish with the French cooking school of the same name, some Swiss defenders trace its origins back 200 years when, facing a shortage of veal at her tavern, a native chef pounded cutlets down, then stuffed them with ham and cheese. No matter the history, here’s hoping Zurich’s cordon bleu tradition is one that’s here to stay.