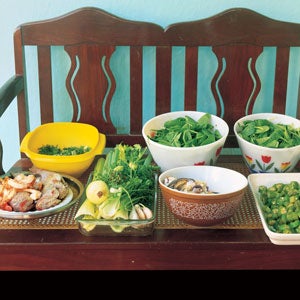 ”Do you know where you are?” asks the plump, matronly woman behind the counter of the souvenir shop I’ve stopped at in Charlotte Amalie in search of some sunscreen. She’s standing a foot away from me, her dark eyes peering into mine. Although I’ve never met her before, I get the feeling that she somehow knows me. Before I can respond, she answers her own question: “Child, you are home. And when you are home, there’s always someone who is willing to help you.” A strange encounter, but I take it as a good omen.

It’s a few days before New Year’s, and I’ve just flown in from New York City to Charlotte Amalie, the largest city on St. Thomas and the capital of the U.S. Virgin Islands, for a family reunion of sorts. My maternal great-great-grandparents, Max and Mathilde Trepuk, were Jewish emigres from Lithuania who came to the island at the turn of the 19th century to join Max’s brother Isaac in his dry-goods business. For generations, the family thrived here. My mother, Patty Nelthropp, met and fell in love with my father, Scott Fagan, in St. Thomas—although they separated after a few years, and she eventually grew tired of island life and, after several trial periods away, permanently relocated to the States in 1980, when I was 11. (My father had left years earlier.)

I spent many carefree, barefoot days on St. Thomas as a boy, but I was too young to appreciate the island’s traditions, or its polyethnic cuisine, or my family’s rather unusual history. When I was growing up stateside, the only connections I had with St. Thomas were murky memories, secondhand stories, and the occasional postcard from my parents’ friends. I did visit the island a few times as a teenager, but when I became an impecunious college student in California, St. Thomas was all but inaccessible to me. The older I got, the more unsatisfying this became, especially after I’d returned to New York and started my publishing career. So here I am, 31 years old and armed with a list of names my parents have given me, hoping to reacquaint myself with the island. That I’ve come just after Christmas is no accident: I’ve been told that the days leading up to New Year’s Eve, here called “Old Year’s Night”, are a special time, when people hold festive open-house gatherings that culminate in one grand party on the 31st. I can’t wait to join in.

The first person on my father’s list is his closest childhood friend, Victor “Tutsie” Edwards. A self-described “old pirate”, this dark, wiry figure was my father’s accomplice in every scheme that two mischievous island boys could conceive. (According to Tutsie, nine times out of ten the pair ended up “drunk and in trouble”.) Tutsie, now retired from his government machinist’s job, was always one of my favorite people on the island, but I’m not sure we’ll have the same rapport after all these years. I needn’t have worried. Sporting a graying goatee, Tutsie greets me at the airport with a soul-warming laugh and several bear hugs. “What, m’ son!” he says. “Is that you? Man, I hardly even recognized you.” Then, true to form, he suggests that our first order of business should be some lunch at Ashley’s, a popular, no-frills outdoor cafe in a corner of the airport’s upper parking lot.

The eatery specializes in Caribbean comfort food: fried parrot fish and plantains; pigeon peas and rice; and, my favorite, the deep-fried filled pockets of dough called pates (pronounced PA-tays). Seconds after we get our pates, I bite through the flaky crust into richly spiced ground beef mixed with garlic and thyme. As the juice drips down my chin and a soft breeze cuts through the tropical heat, I’m instantly transported back 20 years.

Tutsie and I spend the rest of the day driving down memory lane. The lush, mountainous island is as beautiful as ever, and by the time we pass the old roller rink that my parents frequented as kids, I’m starting to relax. When we stop at my father’s childhood home in Bournefield—a slightly run-down area outside Charlotte Amalie that contrasts sharply with the stately neighborhood my mother was raised in—Tutsie points out the mango tree my grandmother planted decades ago. Noting that it’s the tallest tree on the block, I feel a strange surge of pride.

Tutsie also wants to show me the spot where, one night, my father drove my maternal grandmother’s car into the water, and as we head toward the harbor, I’m amazed by the hordes of tourists on Main Street—a pleasant but very commercial strip lined with duty-free shops. Unfortunately, this is the only St. Thomas most tourists get to see. Having arrived by cruise ship in the morning, they’re gone by sundown, which doesn’t leave much time for exploring this 32-square-mile island, let alone learning anything about its history.

Interestingly, it was Denmark, not exactly known for its imperialism, that first
permanently settled St. Thomas, back in 1671. Initially, the Danes tried to establish a plantation economy, using sugarcane crops and slave labor from Africa to produce rum and molasses. But they came to recognize that its deep-water harbor made St. Thomas better suited to the role of entrepot. In 1764, Charlotte Amalie was declared a free port; that, coupled with the fact that Denmark had few enemies, helped make St. Thomas a major commercial center. Traders came from around the world, and by the mid-19th century the island was home to a remarkably diverse population that embraced Danes, English, Spanish, Sephardic Jews, and former slaves. The cuisine that emerged from this mix combined local produce—such as guavas, yams, plantains, and coconuts—with such European imports as herbs, sausages, pork, and pastries. Possession of St. Thomas passed from the Old World to the New in 1917, when the United States purchased the island, along with nearby St. John and St. Croix—the group henceforth to be known officially as the Virgin Islands of the United States. (A larger group of small islands to the east is today the British Virgin Islands.)

The day after my arrival, I visit the first person on my mother’s list, Kathleen Richards, who welcomes me as if I were her own child, even though she and my mother drifted apart years ago. With skin the color of honey and eyes as turquoise as the island’s famed Magens Bay, Kathleen is still a great beauty. When I arrive at her airy, colonial-style home on a ridge high above Charlotte Amalie, she and her husband, Enrique, are baby-sitting their grandson, Nicholas—but that doesn’t stop her from peppering me with questions about my family. Suddenly, I realize that this is the first time I’ve ever seen Kathleen without my mother present—and I feel liberated by the opportunity to form my own relationship with her.

As we talk, I notice a bottle of homemade guava-berry wine on the kitchen counter and casually mention that I’ve never tasted this island specialty. “What?” Kathleen exclaims. “Well, you’ll have to have some now!” After just a small glass of this velvety, slightly bittersweet potion with its aroma of lavender, rose, and cedar, I start asking my own questions: What was it like growing up with my mother in the 1950s? “Well, there was no television,” Kathleen answers, “and we didn’t dare touch our parents’ radios. But your mom had so many great toys. We loved American clothes and magazines, too. And we were best friends, but boy, could we make each other cry!”

Over the next few days, both Kathleen and Tutsie include me in their traditional rounds of holiday visits. I’m invariably introduced as “Patty’s boy” or “Scott’s boy” or “Laura’s grandson”, which usually elicits a big smile followed by “My goodness, I knew your mom/father/grandmother when . . .” Every story is like another thread I can weave into my family’s tapestry, and I listen eagerly to them all. I’m also delighted when Corinne Lockhart—an acquaintance of my mother’s who’s reputed to be an excellent cook—invites me to her annual Old Year’s Night party. Kathleen promises me a great evening and says, “You have to come just to try her kallaloo!”

I am also introduced to Ursula Krigger (“Miss Sula” for short), a 98-year-old woman who lives in Neltjeberg Estate, an area on the north side of the island named for her German ancestors. Blind and bent by the years, Miss Sula possesses the spirit of a young girl and promptly informs me she knew my whole clan, going back to old man Trepuk himself. Then she offers me a bowl of her famous red pea soup, packed with red beans, pigs’ tails, and cornmeal dumplings and so delicious that I ask for seconds, despite the heat outside. “I never could bake,” Miss Sula confides, “but I always loved to make soups and stews, especially during the holidays.” But times are changing on St. Thomas, she adds, her voice tinged with regret; people are being won over by the convenience of fast food, and no one, she says, seems to really cook anymore.

The Maduro family still does. Its 85-year-old matriarch, Altagracia, opened Maduro’s Pate Shop in 1958. “See if you can find Mrs. Maduro,” my mother urged me before I left New York. “I always used to stop in her store after school for her meat pies—these little spicy doughy things that I just couldn’t get enough of.” Today the business is run by Altagracia’s daughter Miranda Richardson and granddaughters Desiree and Dawn. The women work out of their central Charlotte Amalie home, where I visit them one sunny morning. Entering the kitchen, I’m greeted with frazzled smiles. “We’ve done over thirty dozen pies a day since before Christmas,” sighs Desiree. “We pray for strength when we start, and we pray in thanks when we’re done,” adds Miranda. “Praise Jesus.” Then she places a warm, golden pie in my hand and shoos me into the living room, where her mother entertains me for the better part of an hour with tales of my ancestors. It’s a thrill to meet someone who actually knew these people, even if some of the stories are a bit unsavory (I’m not sure I needed to hear about my maternal grandmother’s wild reputation!).

Finally, Old Year’s Night arrives. I start the evening with a banana daiquiri at the Mountaintop bar, where this variation of that classic cocktail was apparently invented in the 1950s. The drink and the views across the Caribbean Sea are fantastic, and I’m in high spirits by the time I arrive at Corinne Lockhart’s home, which is crowded with people of all ages. Corinne leads me straight into the kitchen for a private sampling of her rich, fragrant pork kallaloo. This earthy, restorative New Year’s dish (pronounced KAH-la-loo and sometimes made with fish instead of meat), full of bitter greens, is supposed to bring good luck to those who eat it. She spoons a big serving over a steaming mound of fungi (pronounced FOON-jee), a dense, sticky mixture of cornmeal and okra, then adds some poached red snapper with a sweet-and-sour onion sauce. My plastic plate is buckling under the weight of these special holiday foods, but Corinne warns me to save room for her prized raisin- and nut-filled sweet bread, and I’m glad I do.

As midnight nears, the calypso music is turned up, and four generations of St. Thomians jump to their feet. I find myself dancing with yet another of my grandmother’s friends, struggling to match her boundless energy. Suddenly, we’re all shouting, “Three, two, one, happy New Year!” Kisses, hugs, and toasts are exchanged as the first strains of “Auld Lang Syne” fill the air, and I’m happily in the thick of it all, home.