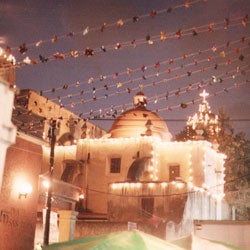 Mexico City’s millions of residents, spread over some 880 square miles, seem to come together in their celebration of a holiday that, here, is still mostly about the birth of Christ. The festive season is marked not only by the church services and the feast of Nochebuena but also by pastorelas (pastorals), which are farcical Christmas plays, and, more significant, by the nine consecutive days of Las Posadas, which officially begin the season on December 16. Pedir posada means to ask for refuge, and posadas are private parties (held in churches, homes, and schools) in which guests reenact the biblical story of Joseph’s asking for shelter for himself and the pregnant Mary. Half of the guests stand outside the house “asking for posada” in the form of a traditional song that is read from a pamphlet distributed at the party but that everyone except the youngest children seems to know by memory. The other half of the guests stand inside, acting wary and skeptical. “Go away, this is not an inn.” Outside: “My wife is Mary, the Queen of Heaven.” Inside: “Are you Joseph?” The singing goes back and forth until the party inside is convinced that the strangers at the door are indeed Joseph and Mary and their entourage, and allow them to come in. Then the party begins, complete with tamales, atole (a sweet drink based on corn gruel), Ponche, sometimes spiked with rum or tequila, and the shattering of a traditional seven-pointed piñata, whose points, broken off with a stick symbolizing Christian will, represent the seven deadly sins.