This family-run institution captures the glories of New Orleans dining. 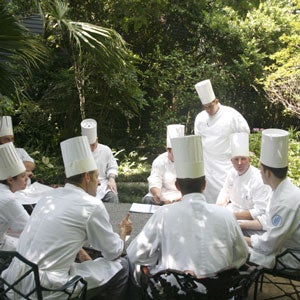 There’s no place I’d rather be on a Sunday morning than on the patio at Commander’s Palace in New Orleans, with a milk punch in hand and a plate of eggs sardou on the way. On crisp spring days, when the light shines silver and the wind rustles the leaves of the Garden District’s old oak trees, it seems everyone is drawn to this turquoise-and-white Victorian mansion that sits like a giant confection across the street from the Lafayette Cemetery: the locals and the tourists, the lunching ladies fresh from church and the politicians passing through town. A brass band ambles from room to room, maneuvering between servers pouring chicory-scented coffee. Silverware clanks, conversation bubbles forth. In the foyer, Ella Brennan, the matriarch of the family that has run this restaurant for the past 40 years, is holding court and telling stories. Her niece, Lally, escorts guests to the bar—which happens to be located in the kitchen, just feet from the stoves—for a round of sazeracs.

No one does restaurants like the Brennans. And no restaurant in that family’s expanding empire, which includes a dozen or so bistros, steak houses, and cafes in New Orleans and other cities across the South, is a more exuberant example of the manifold glories of dining in the Crescent City than Commander’s Palace. It is formal, but good fun; it is huge, but each of the seven dining rooms feels like a restaurant in itself: the intimate Garden Room overlooking a leafy courtyard, the breezy Patio Room, or the main dining room, with its twinkling chandeliers and the bustling energy of a grand Parisian brasserie. The fare is traditional—a marriage of elegant, European-inflected Creole dishes with more rustic Cajun ones—with just enough whimsy to keep it interesting. Though Commander’s has never played into the cult of the chef, it has launched the careers of some of America’s first celebrity cooks, including Paul Prudhomme and Emeril Lagasse. And the service manages to be both pampering and down-to-earth. Like the city that gave it life, the restaurant’s strength lies in its graceful ability to reconcile—and, indeed, revel in—its inherent contrasts and contradictions.

The Brennan dynasty began in 1946, when Miss Ella’s brother, Owen Jr., and father, Owen Sr., opened a restaurant in the French Quarter called the Vieux Carre. Ten years and a few new locations later, the family opened Brennan’s, which distinguished itself from other, more formal temples of New Orleans gastronomy, like Antoine’s and Galatoire’s, by channeling the city’s joie de vivre into a sophisticated dining experience. Brennan’s became famous for its festive brunch, and its servers made showy fun of flaming tableside desserts like bananas foster, a dish Miss Ella invented on the fly one night for a regular customer. In 1969 Miss Ella and her siblings Dick, John, Adelaide, and Dottie bought Commander’s, which had been a restaurant since 1880, and turned it into one of the best places to eat in the country.

I’ve been on the receiving end of Commander’s Palace’s charms over the years, but I’ve also seen it from another perspective; for almost a year when I was in my early 20s, I worked in the front of the house. Like most new members of the staff, I started at the bottom—in my case, ferrying trays of food from the labyrinthine kitchen to holding stations in the dining rooms. It was a smart way to start, allowing me to get the hang of the choreography of the service while also introducing me to the workings of the kitchen, which was presided over by a towering, ponytailed man named Jamie Shannon, who had recently stepped into Lagasse’s shoes. Never had I seen such from-scratch cooking: the air in the kitchen hung heavy with the aroma of file (the powder made of sassafras that thickens and flavors gumbo) and tasso (the Louisiana-style spiced ham, which the cooks cured in-house); huge drums of veal and fish stock simmered throughout the day. Even the worcestershire sauce was homemade.

I worked in the Garden Room, and from the corner table, I could see the path that led to the house Miss Ella shared with her sister Dottie. My wait captain was a fellow named Des who called me “heart” and had worked at Commander’s long enough to have a mental catalogue of regular customers’ requests and tics. To this day, I have never met his equal: whether he was spinning a yarn (and he had some good ones) or pouring whiskey cream sauce into a bread pudding souffle with a dramatic flourish, Des lived and breathed the style of service that the Brennans painstakingly cultivated. “It’s all about the lagniappe,” Dickie, Dick Brennan’s son, used to say, referring to the Creole word for an unexpected gift. Dickie was a manager at Commander’s; now he has three restaurants of his own.

Some things have changed since the days I worked at Commander’s Palace. In the mid-1990s Miss Ella’s daughter, Ti Adelaide Martin, became a co-proprietor with Lally Brennan. Jamie Shannon, who had gone far to champion what has become known as haute Creole cooking, passed away in 2001. And Hurricane Katrina shuttered the restaurant for a year. When I dined there a few months after it reopened, I was touched by how beautifully it had endured and evolved. All the classics, like redfish lyonnaise and succotash-like maque choux, were as impeccably prepared as ever, and the new dishes from chef Tory McPhail, who rose up through Shannon’s ranks, were welcome additions: lusty, local fare like oysters in absinthe cream under a pastry dome. Ti Adelaide, a redhead in a leopard-print shirt, worked the room with practiced grace. She and I hadn’t met, but when I introduced myself as a former employee, she insisted I join her at the bar to try the digestifs the chef had infused with muscadine grapes and other seasonal ingredients. It was the perfect lagniappe.