LA's cocktail scene is in the midst of a delicious renaissance. 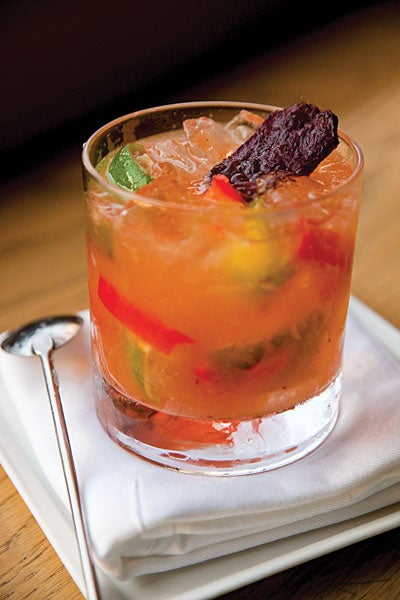 A half dozen years ago, when I was editing a nightlife guide to Los Angeles, the city was awash in appletinis and Red Bull with vodka. Today, given a renewed attention to mixology and artisanal ingredients, I’m happy to say that LA’s cocktail scene is in the midst of a delicious renaissance. Much of the action is located downtown, where The Edison (108 West Second Street; 213/613-0000; www.edisondowntown.com), housed in a huge, gloriously restored 1910 power plant, pays homage to LA’s past with tipples like the Brown Derby, a grapefruit-and-honey-laced bourbon cocktail. Nearby, at the hunting lodge-like Seven Grand (515 West Seventh Street; 213/614-0737; www.sevengrand.la), nearly 300 rare and premium whiskeys, ryes, and bourbons find their way across the hand-carved black walnut bar. A couple of blocks away at Rivera (1050 South Flower Street; 213/749-1460; www.riverarestaurant.com), Latin spirits star in cocktails like the mezcal-and-ginger Barbacoa (see ** Barbacoa Cocktail), spiked with chipotle, garnished with beef jerky, and designed to complement chef John Sedlar’s modern Latin food. But Downtown doesn’t have a monopoly on craft cocktails. In West Hollywood at the **Roger Room (370 North La Cienega Boulevard; 310/854-1300) amid funhouse decor, locals sip ballsy potions like the Thug (bourbon, honey liqueur, fresh lemon juice, and habanero bitters), and it’s a short distance from the Santa Monica Farmers Market to the airy Copa d’Oro (217 Broadway; 310/576-3030; www.copadoro.com), where custom drinks are created on the spot using a patron’s choice of fresh produce. Craft beer is also hot now in LA; at Glassell Park’s suds-and-music club Verdugo (3408 Verdugo Road; 323/257-3408; www.verdugobar.com), hipsters sip more than 80 brews, including esoterica like Stone Brewing Company’s smoked porter, hand-pulled from the cask. And, this being California, the city plays host to more than a few topflight wine bars, including Hollywood’s Lou (724 Vine Street; 323/962-6369; www.louonvine.com), where farm-to-table dinners feature biodynamic, old-vine, and otherwise intriguing bottles. Of course, Los Angeles is also blessed with the sun and the sea; when I just want to relax over a martini with a Pacific view, the swank Lobby Lounge at Shutters on the Beach in Santa Monica (1 Pico Boulevard; 310/458-0030; www.shuttersonthebeach.com) does the trick.