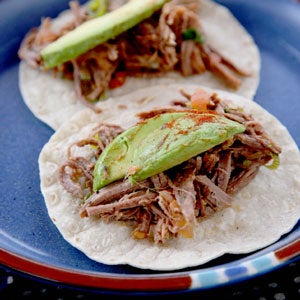 Interstate 10 runs right through El Paso, cinching its sunbaked buildings to the desert foothills of the Franklin Mountains. Along this stretch, the interstate roughly mimics the course of the nearby Rio Grande, the river that divides El Paso from the Mexican city of Juarez. Together, these two cities form a conjoined borderplex of around 2 million people, one of the largest metropolitan areas along the entire U.S.-Mexico border.

As Texas border towns go (think Brownsville, Laredo, McAllen), El Paso is big, busy, and, well, tall. Early on a Sunday morning, though, the faded art deco skyscrapers of the downtown area are empty; the streets are mostly deserted. Closer to the river, at the city’s southern edge, there are more people out and about, and a few menuderias are busy serving the Mexican tripe soup known as menudo. One place, at the corner of Sixth and Oregon, has a bright yellow sign promising both the soup and prepaid phone cards. At the window I order a chicharron gordita (a fat, lightly charred tortilla stuffed with braised pork rind) and a bowl of the stewlike, deep red menudo, which comes studded with plump kernels of hominy.

This is border food, and in this far western elbow of Texas, at the state’s intersection with New Mexico and “Old Mexico”, as some people out this way refer to it, that means a very specific convergence of traditions. There’s the hearty, rustic cuisine of the cattle ranches and wheat farms founded in the northern Mexican state of Chihuahua when the Spanish still claimed this territory. There’s the Texan penchant for living large—an extra ladleful of chile gravy on your scrambled eggs, a thick blanket of melted cheddar on your nachos. And there’s the abundance of chiles grown in the fertile valley just over the New Mexico border, which are stuffed with cheese and then deep-fried to make chiles rellenos at the beginning of the season, when they’re still green; later, once they’re ripe and red, they’re dried, pulverized, and simmered to make piquant chile colorado sauce. It all adds up to an honest, spicy, intensely flavorful cuisine that’s at once earthy and bright, spare and effusive, Mexican and Texan, Southwestern and norteño—food that makes borders seem like nothing more than lines on a map.

These days, though, people are more aware of borders than ever. “History is repeating itself,” says 60-year-old David Jurado, as he slices into a ripe avocado. I’m in the handsome adobe home of his brother, Henry, 72, and sister-in-law, Luz, 66, who have invited me for lunch. “Juarez has become so dangerous that people—those who can afford to—are coming here and staying.”

“Even the mayor of Juarez now lives in El Paso,” Henry says. The Jurados’ father emigrated to El Paso from Chihuahua as a small boy in 1919, during the Mexican Revolution, when more than 890,000 Mexicans came to the United States to escape the violence raging right up to the border. “Back then,” David says, “people in El Paso would climb up to their rooftops to watch the battles in Juarez. Now we watch it on the news.”

Each day, some 100,000 people travel back and forth between Juarez and El Paso, though in recent years things have happened that have made that passage heavier going. NAFTA brought hundreds of American-owned maquiladoras, or factories, to the Mexican side, attracting thousands of people from the interior of Mexico to Juarez in search of work and giving rise to all the problems associated with rapid growth. Most recently, a war of succession among local drug cartels has grown increasingly bloody: there were 1,600 murders in Juarez last year alone. Residents of Juarez look forward to their day jobs in El Paso, which, incredibly, remains one of the safest cities in the United States. For their part, El Pasoans who are able to are staying put. “I used to go across to Juarez three, four times a week,” Henry tells me, “but I wouldn’t set foot there now.”

The Jurados maintain a big part of their connection to Mexico through cooking. For lunch they are making salpicon, a salad of shredded meat eaten throughout Mexico, Central America, and parts of South America. In some places it’s made with chicken; in others, with fish. In El Paso and Chihuahua, it features beef brisket lightly dressed with lime and chipotle. “You have to do it with your fingers,” Luz says, separating bits of brisket into a delicate hash, “to make sure the texture is right.” It’s a recipe passed down from David and Henry’s mother, Estela Jurado, who was, in her day, a renowned cook in El Paso. When Estela’s children were young, her formidable skills were much in demand for church functions. “Her cochinita pibil…,” Henry says, closing his eyes and savoring the memory of the slow-roasted suckling pig his mother prepared on special occasions. In the late 1950s, Estela started a catering business; then, in 1972, she rented a storefront downtown and opened Casa Jurado. The family has been running the restaurant, now an El Paso institution, ever since.

“We don’t eat Tex-Mex here,” Henry says. “No combo plates,” Luz adds firmly. I don’t bother to mention that I’m a fan of the combo plate and of Tex-Mex food in general. The combo concept is an ingenious one originally developed to transform Mexican antojitos, or individual snacks, into restaurant meals; once plates and forks entered the picture, heavier saucing and toppings of melted cheese soon followed. In this corner of Texas, however, the cuisine has remained more Mex and less Tex, more austere in presentation, the better to reveal the subtleties of the local ingredients and seasonings.

The Jurados’ salpicon is a perfect example of that: dotted with finely sliced jalapeños and scallions, diced tomatoes, and monterey jack cheese, the brisket salad is garnished with slices of avocado and served simply, with flour tortillas. It’s pure, fresh-tasting food. “Really, though, if you want to understand how we eat here,” David says, “you need to get across to New Mexico.”

The next day, I follow an old two-lane highway through the pecan orchards of southern New Mexico to the house of 59-year-old Maria Luisa Gonzalez in Las Cruces. She’s a friend of the Jurados’; everyone calls her Malu. She greets me at the door and leads me into the kitchen, where I meet her 85-year-old mother, who is also named Maria Luisa Gonzalez. Malu and one of her grandsons, John Larson, 25, are making enchiladas three ways, in the styles of New Mexico, El Paso, and Juarez.

When Malu was young, her family lived in Juarez, though she went to school every day in El Paso and also spent a lot of time with relatives in southern New Mexico. Movement across borders was more fluid then, as it has been for much of the region’s recent history. There was actually a period in the mid-19th century when much of the area between El Paso and Las Cruces, 45 miles northwest, bounced back and forth between Mexico and the United States, depending on the shifting course of the Rio Grande.

A pan full of chile colorado sauce is warming on the stove. It consists of nothing more than dried chiles, olive oil, garlic, and sea salt, and it’s going into all three kinds of enchilada. John learned to cook at his grandmother’s side; the two of them move comfortably around each other in the kitchen while Maria Luisa keeps a sharp eye on the proceedings. To make the New Mexico-style enchiladas, John, instead of rolling the tortillas, lays them flat, three to a stack, each tortilla dipped in chile colorado and topped with a sparse scattering of cheddar cheese. On top of each stack of tortillas goes a perfect, quivering fried egg. That’s something I haven’t seen in Texas east of El Paso.

The Texas-style batch looks more familiar. These enchiladas, rolled and nestled side by side in a baking dish, emerge from the oven with a glistening lattice of shredded white and yellow cheddar on top. “You’d never get this in Mexico,” John says. “There, cheese is just a garnish, used very sparingly.” Finally, there are the northern Mexico-style enchiladas. “These are like the ones we used to eat in Juarez,” Maria Luisa says, “in the market, at the fritanga [fried food] stands, with their kettles of hot oil.” This version is rolled, too, but only lightly dusted with crumbly cotija cheese and accompanied by fried diced potatoes and a tangy cabbage and radish slaw.

Though the basic ingredients are the same, the three versions are decidedly not. The differences between them come down to subtleties of technique—an extra dip of a tortilla in hot oil, another ten minutes on the stove to reduce the sauce, a pinch of cumin tossed in at the end—the kind handed down intuitively, from mother to daughter to grandson, in the same way a sense of humor or an ear for music might be.

Just after sunset the following day, I’m in the hills above El Paso, overlooking the grid of lights that sprawls uninterrupted across the border into Juarez and beyond. I’d planned to visit a family friend of Malu’s in Juarez, Carla Sofia Zaragoza. But, just days earlier, she’d made the decision to get her children out of that city until the violence there subsided—whenever that might be. Still, Carla thought nothing of inviting me to dinner tonight at the home of her mother, Carlota Enriquez, who moved to El Paso almost 20 years ago, after her daughters were grown. Carla’s sister, Rocio Enriquez, who left Juarez 10 years ago, is there, too, when I arrive. This is the new generation of emigres, moving to El Paso from the cities of Mexico’s north and from other regions, too, bringing their distinctive cooking traditions with them.

In her mother’s kitchen, Rocio calmly directs her mother, sister, two daughters, and niece as they chop, mix, and taste. Carla bounces her 18-month-old son, Santiago, on her hip as her mother offers her a spoonful of pico de gallo. “Too much jalapeño?” Carlota asks; she then adds some cubes of avocado to soften the bite. Eight-year-old Juliana is barely tall enough to see over the countertop, where she’s grating cheese. Carla hands me a glass of cool agua de jamaica.

For dinner we have pan-fried tilapia served over fresh tomatoes and drizzled first with a tangy tomatillo sauce and then with cooling crema. “My great-grandmother from Sonora used to make this,” Carlota says, as she puts a plate before me.

Later, we linger for a long time over choco flan, a bundt-style chocolate cake topped with a sumptuous layer of flan. Carla and Rocio talk about their favorite dishes when they were growing up. They recall how, when they began attending a school in El Paso, their mother would drive them across the border each morning and then return to Juarez to make a chicken soup, thick with potatoes and calabacita squash. When the soup was finished, she’d drive back to El Paso in time to deliver the girls a hot lunch. Then she would head home again to start dinner. “No matter what happened,” Rocio says, “we knew that there would be soup at lunchtime and rice and beans and mole waiting for us at the end of the day.” Whatever side of the border they were on, that food made them feel at home.