What's next for the world's most influential chef? 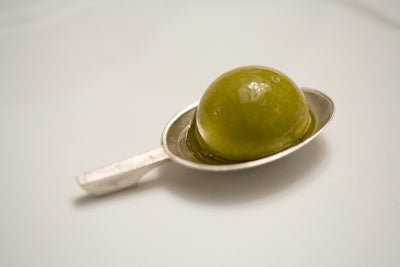 In more than 40 years of writing about food, I have never had an interview as spirited as this. I am sitting opposite Ferran Adria, arguably the most famous—and most provocative—chef in the world, at the restaurant El Bulli, where he’s cooked for 26 years, in the seaside village of Roses, Spain. We are communicating in fractured French, mine rusty from disuse, his overlaid with the rough consonants of Catalan, his mother tongue. I am here because I’m fascinated by Adria’s cuisine, often called “molecular gastronomy,” a term that refers to the chemical and physical processes behind cooking but is far too narrow to describe his sweeping vision. And I’m wondering what Adria, who is 48 years old, plans to do next.

“Is it true you are closing El Bulli?” I ask.

“No, no!” he exclaims. “Our new plans will be a beginning, not an end.” El Bulli’s last meal will be served on July 31 of this year, but after that, he explains, the space will be used for his new educational foundation, which the Spanish telecom giant Telefonica is helping to fund. It will be a gathering place for the culinary world—not just cooks but sommeliers, front-of-house professionals, writers, and, eventually, diners—to experiment with foods and the ideas they spark. It will be far more think tank than culinary academy, Adria adds; at the end of each day, participants will go online to discuss their experiences with the wider world. “It’s all about sharing, about letting the mind take flight,” he says.

And thus begins a soaring overview of what matters most to Ferran Adria: “Progress, freedom from rules. We will be testing our participants’ creativity. I want them to question basic assumptions.” I, by contrast, am a traditionalist, firmly convinced that a great recipe cooked by a master will always add up to more than the sum of its ingredients. That’s why in 1975 I founded La Varenne cooking school, in Paris, where cooks from all over the world come to learn the methods of classical French cuisine. I still maintain you must learn the scales to play the music, and as proof I point to the fact that Adria worked his way up in traditional kitchens, under chefs trained in classical Spanish cooking. “I learned the basics when I started out,” Adria tells me. “And I assume that all the cooks in my kitchen have done the same.”

Ferran Adria was born in 1962 in L’Hospitalet de Llobregat, the second-largest city in Catalonia. He dropped out of school at 18 and started as a dishwasher at a traditional restaurant south of Barcelona. In 1983, he landed a position through a friend at El Bulli, an upscale restaurant on the Costa Brava, and when its French chef left seven months later, Adria and another cook stepped up to the job. By the time he and El Bulli’s manager, Juli Soler, had scraped together enough funds to buy the restaurant in 1990, Adria was gaining attention for his creative cooking: he’d spent time working in the kitchens of the restaurants Georges Blanc and Maison Pic in France and was inspired by nouvelle cuisine, local ingredients, and the idea of doing something entirely new.

It was Adria who pioneered the froths and foams that nowadays often take the place of traditional sauces; he is famous for his “caviar,” droplets of intense flavors like oyster liquor and fruit juice that have been sealed in a membrane with sodium alginate and calcium chloride. He seems to like to laugh at food. I take food seriously, probably too seriously. Then why, if we come from opposite ends of the culinary spectrum, do I find his cooking so compelling? One reason is the science. In some ways, I see his approach as the extension of fundamental cooking techniques; they’re chemical reactions that alter, and improve, the taste of food. In others, it’s pure innovation.

Another quality of Adria’s that intrigues me is his fervent multinationalism, from the cooking, to the ingredients, to the cooks at El Bulli, who hail from 15 different countries. On this visit—my third to the restaurant in ten years—I’m impressed by how Adria has moved from his early exploration of novel techniques to the creation of a truly global cuisine. Glancing over the 37-course menu, I recognize hints not just of the surrounding countryside of Catalonia, France, and Spain but also of South America, Japan, the United States. “Everywhere the sky is blue,” he races on, “there are a multitude of cuisines and dishes. I think of them as the languages and dialects of food.”

Dinner is about to begin. In the 52-seat dining room, our scene is set simply with a white tablecloth and rectangular white plates. We start with an evocation of cocktails: stalks of sugarcane infused with mojito and caipirinha, which we suck lustily. As dinner progresses, I note how often we are asked to play with our food, whether it’s to crack a “pond” of ice with a spoon before drinking the sweet, mint-flavored water beneath with a straw, or to pick up an olive that collapses into a rich and puckery liquid essence of olive once it hits the tongue.

You might fear that a succession of 30-plus courses would lead to boredom, or even overkill, but Adria is a master of communication, pacing, and suspense. Dishes hold inner meanings, and sometimes jokes. Every menu includes roses, a reference to the seaside town where the restaurant is located, Roses: this time, it’s a flower formed of steamed rose petals dressed with an extract of artichoke, their dual fragrances filling the air.

The high point of dinner for me is an egg so large it seems to have been laid by an ostrich. When we crack the surface, it is totally empty inside. We break and nibble the shell, which turns out to be a creamy frozen extract of Gorgonzola cheese. How on earth, technically, was that achieved? Associations stream through my mind: Humpty Dumpty; collecting eggs in the farmyard as a child; gem-studded Faberge eggs in the Hermitage at St. Petersburg; the birth of Superman. It can be no accident that Dali, the surrealist painter, lived and worked less than 20 miles from this very spot.

Like Dali, Adria has a strong sense of theater. He is adept at the feint (chocolate ravioli hides hare liver inside), the frontal attack (four plays on almonds, alternately salty, sweet, acidic, and oily), and the disguise (“caviar” made from hazelnuts). Though deconstructing dishes—pulling them apart, then rearranging them on the plate to evoke the original and challenge the senses—dates back to at least the 1930s and the Italian Futurist Filippo Marinetti, author of the 1932 book The Futurist Cookbook (in which he imagined meals where every person has the sensation of eating “not just good food, but also works of art”), no one does it like Adria. Amid all the emotional triggers and cerebral essences, his food remains utterly delicious. Whether it’s a toasty puree of peanuts (“Skippy for grown-ups,” a fellow diner said) or a piece of ice sprinkled with green tea, you put it in your mouth and your eyes light up. Wow!

Nonetheless, not every dish at El Bulli is for everyone. I well remember, on a previous visit, the appalled expression of an English friend when presented with a Braque-like fish skeleton, crisply fried to be eaten with the fingers. My own particular horror was a quivering, rose-scented blob, a look-alike for a beached jellyfish. On this occasion, my son Simon’s nose wrinkles when he tastes Parmesan ice cream with a hint of balsamic and a dried strawberry on the side. “I like my cheese plain,” he protests.

Adria is well aware of the challenges he sets his guests. He is not seeking approval but testing preconceived ideas. “There are many cultural prejudices,” he says. “For instance, even though fresh fish is a regional staple, Catalans don’t like sashimi.” That said, he serves it all the same.

Of course, the real reason I’m here to interview Adria is that he’s changing the way we eat. “Ferran Adria is easily the most influential serious chef of the late 20th and early 21st centuries,” writes Colman Andrews in his biography Ferran: The Inside Story of El Bulli and the Man Who Reinvented Food (Gotham Books, 2010). “Quite simply, he changed the game.” Adria’s impact can be seen in all the experimental cooking going on in restaurants today. There are other luminaries driving this movement: Juan Mari Arzak, an early pioneer at Arzak in San Sebastian, Spain; Heston Blumenthal at the Fat Duck in Bray, near London; Grant Achatz at Alinea in Chicago; Wylie Dufresne at wd-50 in New York; Jose Andres with Minibar in Washington, D.C., and The Bazaar in Los Angeles. But Adria is the ringleader, and his new foundation—which plans for more collaboration, more books (Adria has already published some 25), more multimedia—along with his new restaurant projects (like the cocktail bar 41° in the Parallel district of Barcelona, and a tapas bar next door called Tickets, which he runs with his brother, Albert) will continue to further his reach.

Our time runs out, and Adria bounds to his feet. The next minute, he is apron-clad and back in the kitchen behind the worktable, spoon in hand, conferring with a sous-chef. I warm at once to the ambience of fresh-faced young people eager to learn, a reminder of my days at La Varenne. But here the atmosphere is far more intense, more idealistic.

I offer the chef my thanks and my congratulations on all he has achieved. He smiles humbly. “We are so lucky,” he says to me. “Just to eat is a gift.”