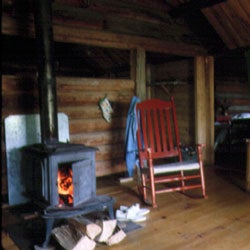 West Branch Ponds Camps rises out of a clearing at the end of a rutted dirt road deep in Maine’s northwestern woods—eight cabins and a lodge building, their exteriors weathered to a silvery patina, built along a low ridge overlooking First West Branch Pond. (There are four West Branch ponds in all, strung together like a necklace by tiny streams.) The oldest cabins date to the turn of the century; the most modern were built in 1937. Wild grass surrounds the structures, thick and strewn with buttercups. Across the still pond, White Cap Mountain looms. It is an almost surreally serene tableau.

There are those who say that there’s no real wilderness left in Maine. But to the average city dweller, these woods do indeed seem like a wild kingdom. Thousands of acres of uninhabited forest surround the camp, thick with cedar, spruce, balsam, sugar maple, beech, and yellow birch. The streams are choking with trout. A field guide’s worth of woodland creatures inhabits the region. We hadn’t been at West Branch for an hour when we saw our first moose, wading nonchalantly in the pond—we were eating lunch in the pine-paneled lodge dining room at the time—and in the next couple of days, without trying very hard, we saw chipmunks, deer, ducks, and indigo buntings—not to mention at least a dozen more moose. The only jarring note is the pattern of clear-cuts in the distance, zigzag tracks gouged out of the densely wooded mountain. West Branch, like most fishing camps in this part of the state, sits on paper-company land.

West Branch isn’t near much of anything. The closest township, Kokadjo, about ten miles to the west, consists of nothing more than a trading post-general store-luncheonette, its parking lot always crowded with RVs and four-wheel-drive vehicles (usually with canoes strapped up top), and with 18-wheelers loaded with timber. Twenty miles south of Kokadjo is the former logging outpost of Greenville, the nearest thing to a metropolis hereabouts. Stretching northwest from Greenville lies Moosehead Lake—”like a gleaming silver platter,” Thoreau once wrote, “at the end of the table.” Portland, Maine’s largest city, is at least a three-hour drive to the south.

People come to this part of Maine to do things—if not to fell trees, then to hike, fly-fish, canoe, scale mountains, tackle white-water rivers. Naturally, all this activity whets the appetite—and thus the food of the region has always been robust and plentiful. Nineteenth-century loggers routinely scarfed down ten biscuits apiece for breakfast, along with baked beans, stewed meat, and tea. Fresh-caught trout and salmon, old-fashioned baked goods sweetened with wild berries and rhubarb, robust chowders, succulent meat loafs and roasts—these are the staples of the local cuisine.

The trendy urban name for fare like this is comfort food. At West Branch Ponds Camps, owner-chef Carol Stirling—whose family has run the camp for three generations—just calls it meat and potatoes. But comforting is indeed the word for this brand of simple, soulful Yankee cooking. How else would you describe biscuits doused with home-tapped maple syrup, smoky trout chowder, molasses-sweet baked beans, camp-style potatoes cooked with onions and bacon fat, buttery wild-blueberry pancakes, sticky oatmeal pie? This is a way of eating that has all but gone the way of the caribou in our age of demon cholesterol and prettified camera-ready food. The cheerfully energetic Stirling, though, is a conservationist, keeping the species alive and healthy.

Stirling’s grandparents ran West Branch from the 1920s through the ’40s. Her mom and dad took over in the ’50s. Carol grew up at the camp, underfoot, watching and tasting. She waited on tables in the dining room as a teenager, and was allowed to bake for the first time in the summer between her junior and senior years of college, turning out doughnuts, pies, and breads (a lot of which, she admits, got fed to the pigs instead of the guests at first). The torch passed to Carol and her husband, Andy in 1974 (they met at the University of Maine at Orono and married the day after Carol’s graduation)—but her father, Clifton Kealiher, still remains a presence at the camp, tossing out cooking tips (three eggs make the meat loaf easier to slice, he says), guiding guests to secret trout streams, and generally holding forth.

For the past couple of days, he’s been hobnobbing with Roland Rhode, an old-timer who has been vacationing at West Branch since 1938. Rhode has a head cold—and, worse, the fish aren’t biting. Kealiher is giving him grief—the northern Maine version of dissing. “Usually they jump right on the line,” he says. “You’d better gargle with salt water.”

As it happens, Stirling, who likes to wear striped aprons and is given to humming tunes like Rod Stewart’s “Having a Party,” is whipping up this New England elixir right now. She “chops” an onion the way her father used to, peeling it, crosshatching it in her hand. “Grandfather used to say you always want as many onions as potatoes,” she recalls. The chowder is classic Maine—milky rather than creamy, with a pool of butter on top and shards of pinkish trout instead of the clams or haddock you’d find on the coast. It gets its smoky flavor from salt pork, cut in strips, scored, and then fried crisp. (The pork comes from Stirling’s pigs, and this is one well-fed group: they dine on all the scraps.) Salt and pepper are added at the table.

Because the chowder calls for a munificence of trout, guests will often combine their catch for the communal good—if, that is, they haven’t already had their fish done up for breakfast, dipped in cornmeal and panfried in a cast-iron skillet, then served with scrambled eggs, toasted biscuits, and bacon. Silvery brook trout about seven to ten inches long are ideally suited for this method of cooking. “The flesh comes right off the bone like corn on the cob,” says Andy, the morning cook, knowledgeable about all matters relating to fish. Catch a larger trout, or a fish like landlocked salmon, and it’s likely to be wrapped in cheesecloth (to soak up the fish oil and make the skin peel off easily) and poached—then served with melted butter and cider vinegar and the traditional peas (fresh ones in season).

Stirling’s cooking may be simple, but it’s always balanced. Tart cranberry muffins and sweet mixed pickles are a fine counterpoint to a lunchtime turkey soup, made with leftovers from Sunday dinner. Nutty graham flour muffins take a meal of meat loaf and baked potatoes into delicious new territory. Tonight, rosy baked ham gets sides of biscuits (made with an old Maine cook’s secret, Bakewell Cream, a variation on cream of tartar), boiled potatoes, cooked spinach, and a pleasantly acidic rhubarb surprise—a cross between a crisp and a pudding—for dessert. Pea soup, seasoned with chunks of salty leftover ham, will be paired with toasted cheese sandwiches for lunch tomorrow, and this time the pickles will be dill.

Nearly everything served at West Branch is homegrown or homemade. In season, vegetables come straight from the garden—glossy beet greens, fresh cabbage, blue Hubbard squash (a New England mainstay). Chives grow wild all over the property, and fiddlehead ferns—traditionally served with fried smelts—are there for the picking in springtime. In the winter, clear amber maple syrup is tapped from the trees. Breads and desserts—as well as such confections as molasses cookies—are baked fresh daily at the camp, and Andy grinds and trims the meats. In June and July, neighbors haul up baskets of rhubarb from their yards. Come August and September, guests fill old peanut-butter pails with sweet wild blueberries—a basic ingredient of the region’s cooking since local Indians threw them in stews.

At West Branch, blueberries go into one of the many New England standards that date back to the days when Cotton Mather was big news—a crisp, a slump, a buckle, a pie, or maybe pancakes. Stirling finds the slightly tart berries from the first ripening, usually in late July, ideal for blueberry gingerbread (a favorite of those 19th-century loggers), the sweetness of the molasses tempering the sour fruit. And if she’s putting the berries into pie, you can be sure there’ll be lard in the flaky crust. “We buy it in 50-pound cubes, and there’s nothing like it for piecrust,” she says, as she rolls out a round of pastry on a well-worn wooden counter.

Like her food, Stirling’s kitchen is from another era. The timbered roof in this part of the lodge is the real thing, which is to say that it dates back to the 1890s, when West Branch was a moose-hunting camp. (It converted to a fishing camp in 1936, after moose-hunting was outlawed in Maine. In 1980, limited hunting of the animals was resumed—but Stirling doesn’t approve of moose-hunting.) Every kitchen utensil, every piece of furniture, has a story—the wooden sink, the Vulcan stove, even the ragged straw broom, which Stirling used to shoo a black bear out of the kitchen late one night. There is no blender, no food processor, no pasta machine. The only modern appliance is a black Kitchen Aid dishwasher.

Some of the pots and pans are as old as the cabins. A few lost their handles along the way and have been fitted with wooden spools. Potatoes soak in an old club aluminum pot Stirling’s grandparents “cooked everything in.” Muffins filled with apple jelly tumble out of vintage Gem muffin pans. (Muffins baked in metal come out crustier than those made in paper cups.) The coffee grinder is a hand-cranked gizmo that brings to mind a gramophone. When Stirling makes her grandmother’s oat-molasses bread, she uses a tin bucket-like affair into which an evil-looking hook descends. This is a bread mixer, about 100 years old. The instructions are still legible: turn three minutes. That’s all—but three minutes kneads dough that would take 20 minutes by hand. The hearty, rough loaves are baked two to a pan, so that they rise high and plump. Regulars know that if there’s any of the bread left after Thursday’s roast beef dinner, Andy will use it to make French toast the next morning.

Another kitchen relic is the deep, short-handled bean pot used for Saturday’s New England church supper baked beans. Baked beans are serious business in Maine. The traditional fishing camp method of cooking them is to bury the pot in a hole, with smoldering hardwood embers above and below, and leave it there overnight. Stirling eschews this method—it’s too labor intensive, she says—sliding them into the oven instead. (They taste wonderful anyway, of course.) Stirling’s practical approach to cooking has inspired more than a few such departures. She bakes rather than steams the beans’ essential accompaniment, Boston brown bread, for instance. It would take three hours to steam it properly, she explains, and that’s too long to keep the gas going. Her New England boiled dinner is made with pork shoulder instead of beef brisket—for the simple reason that beef brisket is in short supply in Kokadjo. She also adds an unorthodox assortment of vegetables to the dish—turnips, cabbage, beets—”for color.” And she has given up baking old-style custard pie altogether. It requires a lot of milk, she explains, and refrigerator space in the West Branch kitchen is at a premium. “When I had my cow,” she sighs, “I’d cook that pie with abandon.”