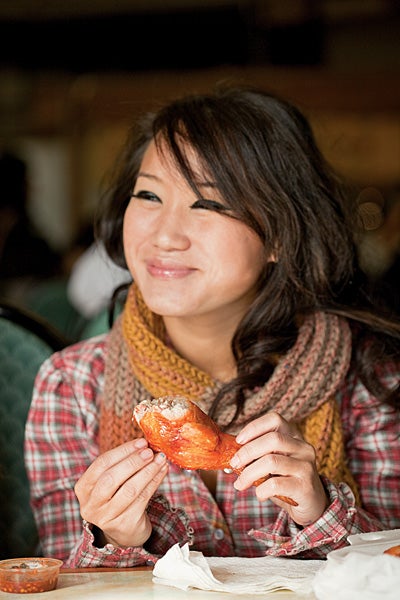 The Hmong language has no future or past verb tense, which would make it difficult to express the following: years ago, Minnesota didn’t have much in the way of Asian markets, but today and for the foreseeable future it has one of the most interesting ones in the country.

This is because St. Paul, the state capital, is home to as many as 80,000 Hmong residents, members of an ethnic group native to mountainous regions in Laos and Thailand. On a busy Saturday, it seems like they’re all at the Hmongtown Marketplace, a sprawling indoor-outdoor market in the city’s northwest where more than 200 vendors occupy ten acres’ worth of stalls. Much of the produce sold there is locally grown, often by Hmong farmers: squashes, long beans, flowering mustard greens, and Napa cabbage, among other vegetables. There are imported tropical fruits like longan and young coconut, plus bundles of “chicken herbs,” a Hmong-style bouquet garni consisting of angelica, dayflower, sweet flag, and the as-yet-untranslated minty ncaug txhav and pleasantly bitter tshab xyoob.

Hmong also visit the market to purchase things to help explain their history to their children, like the clock recently on display at a stall; its face bore a picture of the Hmong military leader General Vang Pao saluting U.S. Air Force bombers, a reminder that CIA-backed Hmong guerrillas fought in Laos under General Vang during the Vietnam War. Persecuted by the communist Pathet Lao government afterwards, many Hmong fled, settling in France, Australia, and, in their biggest concentration, in St. Paul.

The Hmong Marketplace, which started in 2004 in what used to be a lumberyard, serves as a cultural anchor. “If you want to connect to your heritage, you just go to the Hmongtown Marketplace,” says Xai Lor, 27, who works at St. Paul’s Hmong Cultural Center. “You can have a tricolor drink, and you feel very Hmong.”

Those tricolor drinks, called nab vam, are icy coconut-milk parfaits layered with such ingredients as tapioca pearls, cassava-starch noodles, diced cantaloupe, minced papaya, and flavored gelatin cubes. Nab vam restores the palate after a run-in with one of the blazing, house-made chile sauces that almost every food stall sets out as a condiment. There are plenty of good things to put all that chile sauce on: chicken-and-pork stews made with water spinach and mustard greens; fawm, a Hmong version of pho, the Vietnamese beef noodle soup; and barbecued pork and chicken, served with a side of purple sticky rice. Diners eat their food at communal tables while video screens broadcast advertisements for local Hmong businesses and Hmong toddlers chase one another through the aisles.

“I bring my boys here,” says Jody Yang, 30, the mother of a seven-year-old and a nine-year-old. “They don’t speak Hmong, but they play with other kids who speak Hmong, and I say, ‘Did you understand that?,’ and they shrug. They understood it enough, but more important, they are getting an idea of what it means to be Hmong and that they’re not alone.”