Gianduia: Nutella Wishes it Could Taste This Good 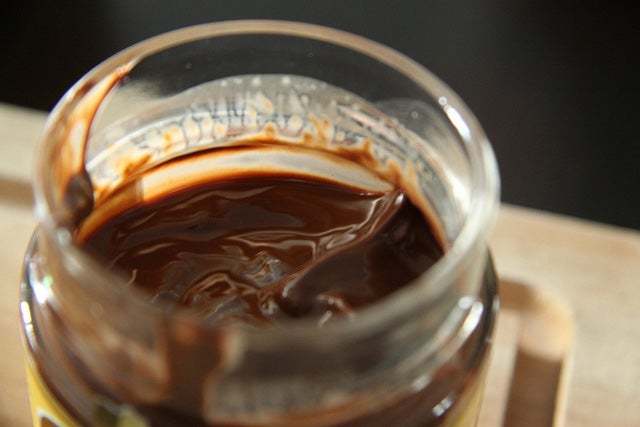 As a teenager, I ate Nutella straight from the jar, eschewing any vehicle for the spread beyond a spoon. I found it pointless to let another flavor interfere with the brilliant combination of chocolate and hazelnut, and so I carried on with this admittedly uncouth behavior for years, until I discovered Nutella’s sophisticated older cousin, gianduia.

Gianduia is an Italian dessert paste made from hazelnuts, cacao and sugar. It was invented in Turin, the capital of Piedmont, the northwestern region that sits alongside France and Switzerland. Just south of Turin is the Langhe, a lush, hilly area covered in hazel trees, whose buttery, tri-lobed nuts are prized worldwide, though locals know them simply as tonda gentile delle Langhe—”the sweet round nut of the Langhe.” Local confectioners started combining the nuts with cacao in the 18th century, naming the pasty product that resulted for the eponymous marionette character who represents Piedmont during Carnival.

Traditional gianduia is deeply nutty (by law, modern versions must contain at least 20% hazelnut to even be called gianduia, though premium producers go much higher) and luxuriantly dark—the spread was invented before milk chocolate. (Today, milk chocolate gianduias do exist, and some of them are quite tasty, though purists may disagree.) Whether dark chocolate or milk, gianduia is grown-up stuff: sweet but balanced, with an elegant, rich flavor that belies the purity of its ingredients.

My teen dream, Nutella, was invented in the 1940s, by Italian pastry maestro Peitro Ferrero (of Rocher fame). Originally called Pasta Gianduja and sold in individually-wrapped solid loaves, the confection was introduced post-WWII, when cacao was still carefully rationed. The loaves didn’t last long: Ferrero soon started making a cheaper version with the aid of vegetable fat, which helped stretch pricey ingredients and created a smooth, spreadable paste, sold in jars under the name Supercrema Gianduja. The spread was renamed Nutella in 1964, and today, tubs are stocked around the world.

All of this is to say that when I encountered a chocolate tort filled with true gianduia at a Piedmontese-themed dinner recently, I was more than a little excited. A heady, comforting smell filled the room, and the chef pulled me aside with a secret: he’d mixed a tablespoon of ground coffee into the gianduia before baking to help intensify the flavor of the toasted hazelnuts. The decadent finished product—individually portioned dark chocolate cakes oozing with molten centers of the nutty stuff—arrived runny and warm, garnished with whole tonda gentile delle Langhes. It was served, much to my delight, with nothing more than a beautifully curved spoon.