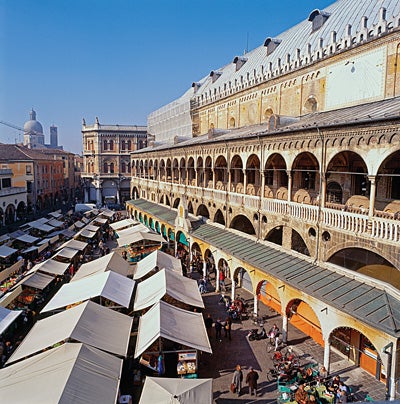 Piazza delle Erbe and Piazza della Frutta, Padua
In my opinion, the city of Padua, in the northeastern Veneto region, is home to Italy’s most breathtakingly beautiful market (pictured at far right). The majestic 13th-century Palazzo della Ragione divides the city’s sprawling central marketplace into two distinct squares: the Piazza delle Erbe, which used to be devoted to vegetables and herbs, and the Piazza della Frutta, which specialized in fruit. Nowadays you can buy all sorts of foods in both areas. The first floor of the palazzo is chock-full of vendors selling meat (there are still a few butchers who sell cavallo, or horsemeat, a local delicacy), cheese, and flowers. The Piazza delle Erbe market is a rainbow of fruits and vegetables grown in the Po Valley (like radicchio, pictured at right); I have a particular fondness for the berry stand, where small trays of strawberries, raspberries, and more are arranged like a gorgeous mosaic. After a long market tour, I usually retire to one of the osterie (wine bars) that line the market for a refreshing aperitivo. (Piazza delle Erbe, Padua.)

Mercato Centrale, Bologna
Bologna’s main produce market overflows from via Francesco Rizzoli into il Quadrilatero, a network of narrow medieval streets in the center of town that includes Piazza Mercanzia (Merchant Goods Square), via Drapperie (Cloth Sellers Street), via Caprarie (Goatherd Street), and via Orefici (Goldsmith Street). The surrounding region of Emilia-Romagna is home to some of Italy’s greatest gastronomic gifts (prosciutto di Parma, Parmigiano-Reggiano, Grana Padano, mortadella, balsamic vinegar, and more), and you can find them all here, along with fish vendors, meat stalls, fruits and vegetables, and a great housewares store, Antica Aguzzeria del Cavallo, which carries every kind of pasta cutter imaginable. For me, the highlight of the market is A.F. Tamburini, a 78-year old pasta and provisions store where you can buy excellent ravioli, tagliatelle, and tortelli, either fresh or, in the adjoining cafe, cooked and served with a rich ragu bolognese. (9 via Francesco Rizzoli, Bologna.)

Porta Nolana, Naples
The twin towers of the old Porta Nolana city gate signal the entry to what may be my favorite fish market in Italy. While fantastic fruits, vegetables, and other goods are also sold here (this is the best place on the planet to buy buffalo milk mozzarella), it’s the sparkling fish, brought in fresh every morning, that make Porta Nolana so special. All kinds of seafood are on display: clams spitting seawater, octopuses on ice, whole swordfish, and on and on. (Via San Cosmo Fuori Porta Nolana.)

Vucciria, Palermo
This Sicilian market is as close as Italy gets to a Moroccan souk. Occupying a web of narrow downtown streets, the Vucciria market offers a cacophony of market cries—”Fragole, belle fragole!” (“Strawberries, beautiful strawberries!”)–and equally vibrant fruits and vegetables. Here’s where I’ve found some of the city’s best butchers, many of them specializing in locally raised baby lamb, as well as Sicilian specialties like estratto di pomodori, the rich, concentrated tomato extract that’s essential to the region’s pasta dishes. In spring, vendors sell tender boiled artichokes straight from the pot. (Along via Coltellieri, via Maccheronai, and via Pannieri, Palermo.) —Lidia Bastianich, host of the PBS program Lidia’s Italy