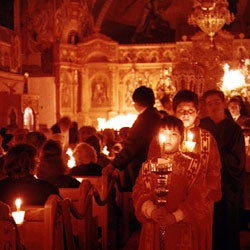 Easter has always been my favorite holiday. I grew up in Queens, which was (and still remains) a major center of Greek immigrant culture in America. Here, Easter—Greek Orthodox Easter—hints at something larger than life, something that I, with a child’s sensibility, could only guess at. It was filled with a kind of commotion that seemed to consume entire days. I remember the contrast between the Byzantine hymns wafting from the speakers outside our church and the staccato clanking of the elevated subway; I can still see the surreal juxtaposition of the purples, reds, and golds of the priests’ robes against the raw graffiti scribbled throughout the neighborhood; and, as if it were yesterday, I can feel the stares of the non-Greek families peering down from their apartment windows as we moved en masse—each of us cupping a single, lighted candle in our palms—through the streets on Good Friday.

Calculated according to the Julian calendar, Greek Orthodox Easter rarely coincides with Roman Catholic and Protestant Easter; it falls on the first Sunday following both Passover and the first full moon after the Orthodox vernal equinox. Unlike many other celebrations of this holiday, our festivities stretch from Palm Sunday through the Sunday after Easter, the day of Saint Thomas. They peak during the conclusion of Holy Week, a four-day period marked by solemn ceremonies, joyful get-togethers, and a distinct holiday menu that is never taken for granted.

This menu always includes specialties that we enjoy but once a year. These foods take days to prepare and are intended for specific meals: fried cod, brined vegetables, and salty taramosalata on Palm Sunday; sweet braided bread, hard-cooked eggs, and a soup of lamb’s innards after Saturday’s midnight service; kokoretsi (skewered twists of offal secured with lamb’s intestines) and spit-roasted meats on Easter Sunday afternoon. Greek immigrants and their children still cling tenaciously to these specific foods, and nowhere in the Greek expatriate community is this more apparent than in Queens. Towards the end of the Lenten season, Greeks from every corner of the New York metropolitan area stream into Astoria, a neighborhood in the northwestern corner of the borough. Stores are stocked with special pastries, cheeses, produce, and plenty of holiday meats like the whole lambs and young goats (kids) dangling on display in meat market windows. K & T Meats, one of Astoria’s most venerated butcher shops, sells some 3,500 lambs and goats during the two weeks prior to Easter Sunday. In a typical week the rest of the year, they may sell 50.

But Greeks return to Astoria not just to shop. Some come simply to celebrate the holiday. I’ve been doing it myself for years—even though I live part of the year in Greece—and every year I’m reassured by how little things have changed. My sister still makes the same spanakopitta, or spinach pie; my friend Maria Nikolaidis unfailingly reproduces the tsoureki (Easter bread) that her mom taught her to make years ago in Ikaria.

At Greek Easter, as important as the food itself is its preparation, and this entails a revered routine. Holy Thursday, for example, is the day for dyeing Easter eggs. Back when the dictates of religion were more closely followed and people fasted for the entire 40 days of Lent (many Greeks today refrain from eating meat on Fridays and during Holy Week), rural households ended up with far more eggs than they knew what to do with; hence, Easter’s wealth of egg-based dishes: breads, pastries, and a soup bound with avgolemono, an egg-lemon sauce. In Greek homes, hard-cooked eggs are not decorated at Easter as they are elsewhere but are stained a vibrant, almost shocking, shade of red, a symbol of the blood of Christ. (Some say the tradition stems from the legend of a woman, who, when told of Christ’s resurrection, is said to have replied, “I’ll believe that when my eggs turn red.”)

Nikolaidis, after many years in the States, still buys the same Greek red dye she always has. She stains dozens of eggs; steeping, drying, then rubbing some with olive oil for a rich, deep sheen. She says that she spends 15 hours in the kitchen dyeing and baking. “It’s tiring, daughter,” she admits affectionately in Greek, “but I do it for my children.” She makes 15 loaves of tsoureki, which is similar to challah but flavored with either lemon, orange, mastic (the resin of an evergreen native to the Greek island of Khios), or makhlepi (the seeds of a Mediterranean wild cherry), and adorned with Easter eggs. Nikolaidis also bakes hundreds of koulourakia, biscuitlike cookies perfect for dipping into coffee. Her sons, friends, cousins—everyone who piles into her house when she hosts Easter Sunday—all go home with a few.

In contrast to Thursday, Good Friday is meant to be relatively calm, a day of somber reflection. Children go to church to decorate the Epitaphios, a mock coffin that will become the focus of the evening’s “funeral” procession. In Greece, the march can stretch miles from church to cemetery, but in America, it has been reduced to a short trip along the streets surrounding the church. Friday is also when the Lenten fast is strictest, when even olive oil is given up. But simple food is still symbolic: we eat lentil soup, for instance, because it represents the tears of the Virgin Mary.

The real Easter frenzy begins on Saturday with the mageritsa, a traditional soup made out of the scraps of the meat for Sunday’s roast. “Dad is the soup-maker,” explains Charlie Vergiris, a Greek transplant living in Queens. “But,” he adds, “Mom does all the cleaning,” meaning the innards—liver, sweetbreads, heart, and intestines—featured in the soup. The intestines, so that they stay together during cooking, must be tightly braided, a task which is, for Evagelia (“Evelyn”) Vergiris, Charlie’s mother, less time-consuming than the cleaning itself. Her husband, Paraskevas Vergiris, meanwhile, oversees the chopping, and together they make two types of mageritsa: a tomatoey stew typical of that made in Dafni, the village south of Sparta that the Vergiris family emigrated from, and the more common, soupier version, in which the innards are chopped.

Much more conventional than either mageritsa is the spanakopitta, not an Easter dish per se, but such a favorite in the Greek kitchen that it often replaces the more seasonal pittes (pies) baked in Greece; those made with spring cheeses or a mixture of greens such as wild fennel, sorrel, lemon balm, poppy leaves, and mint. Whatever the filling, pittes are, in most homes, a chore for the women, usually the oldest, those with the most experienced hands. In my family that means my older sister. In the Vergiris household, however, the recipe has recently been passed from Charlie’s mother to his sister Katherine.

The celebration begins on the stroke of midnight at the Resurrection service that ushers in Easter Sunday. In a darkened church—all lights are extinguished to represent the darkness of Christ’s tomb—a single flame is lit and then passed from one candle to another, from person to person, until the whole church is once again filled with light. We return home with flickering candles (it is considered a good omen if the flames continue to burn), bless the house by marking a cross above the door, and break the fast. The frothy avgolemono is added to the mageritsa (the soupier version), the tsoureki is sliced, and the customary Easter game of egg-cracking begins: One person holds an egg upright while another tries to crack the shell by tapping its top with another egg.

“I just like to have everybody together; all my family, all my friends,” explains Vergiris, who has been hosting an Easter feast for his extended clan, 30 to 50 people, for the past several years. Before that, everyone gathered at his parents’ house in Cliffside Park, New Jersey, where the family settled shortly after emigrating in 1967. Charlie eventually went to work for Krinos Foods, the largest American importer of specialty foods from Greece, married a Greek-American woman, Lillian, then moved and settled in Douglaston, near Astoria. He now has a daughter, Evelyn (named, as is customary in parts of southern Greece, after the father’s mother)—and she is, he says, the single most important reason he so devoutly rekindles Easter traditions.

For those in charge of roasting the meats for Sunday afternoon, Holy Saturday is a short night. Vergiris says that he and his brother-in-law Gregory Evangelou start setting up for the feast around six in the morning. Spit-roasting, whether at home or in a communal roasting pit (as it was often done in smaller Greek towns), is a practice that belongs to mainland Greece. Traditionally, Greeks from the islands roasted their lambs, which were stuffed, in ovens—often the village baker’s. Perhaps because a barbecue is more of a social event, spit-roasting has been adopted all over Greece, as well as in America—at least by those with the space and the equipment to do it. Vergiris has two spits, room to roast four lambs or goats (he usually prepares both).

Vergiris learned how to roast by watching his father. He and Evangelou season each animal inside and out with garlic, dried Greek oregano, salt, and pepper. Then they pin each carcass to the rotisserie and sew the bodies tightly closed with steel wire (that way, the steam trapped inside will help cook the meat). The process takes most of the morning. “I tell people to come over after ten o’clock,” he says, “but anybody who wants to help is welcome earlier.” The cooking, which is always over natural wood charcoal, is a four-to-five-hour process and requires constant attention, but it is a job tempered by a continuing parade of mezethes, or appetizers: stuffed grape leaves, olives (such as kalamata and nafplion), and cheeses (like feta and graviera) from the kitchen; and kokoretsi and loukanika, Greek sausages, from the grill. Everything is served with plenty of ouzo (“for us old-timers,” Vergiris says) and wine (Greek, of course). So, even though the lamb and goat—and kotopoulo souvlaki, or chicken skewers—are not served until 2 p.m., the day is an ongoing feast, and everyone eats and drinks themselves into a state of exhaustion.

It’s hard to explain to most Americans what it’s like to feel such a strong link to another world and an earlier time, but that, even more than the holiday’s religious significance, is the essence of Easter for us. It’s about re-establishing our place in the continuum that we instinctively call tradition; it’s about a sense of roots. That’s why, even after a lifetime in the States, we still abide by familiar rhythms. It doesn’t come automatically, though. “Even in Queens,” says Charlie Vergiris, “you don’t knock on your neighbor’s door and ask how to do something.” He and his sister have slowly inherited Easter responsibilities from their parents. “You have to hold onto it,” Vergiris says, “and you have to learn it well enough to pass it on.”