Heaven in a Bowl: The Original *Pho*

The original pho is a complex and subtle masterpiece 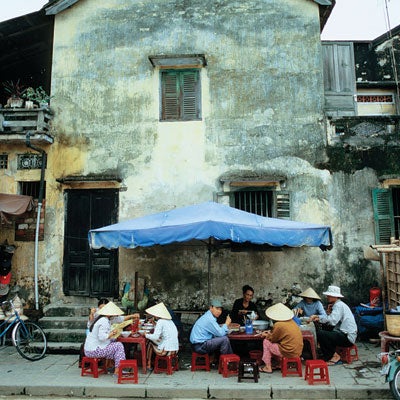 I’ve had a lifelong relationship with pho (pronounced fuh), the delicately spiced beef and rice-noodle soup that’s practically the national dish of Vietnam. It first won me over in 1974, when I was five years old; my parents had brought me to their favorite pho joint in Saigon, and I apparently wielded my chopsticks and spoon like a pro, quickly emptying my bowl. From then on, I was hooked.

Pho joints are everywhere in Vietnam—hidden down small city alleyways, nestled between village storefronts, situated along dusty rural lanes. Yet when my family immigrated to Southern California in 1975, good pho was nowhere to be found, so my mother began making her own. She spoiled me with her homemade version, but I didn’t fully understand her approach to this staple dish until I traveled back to its source.

In Vietnam, pho is mostly a breakfast food: the heady soup awakens your senses and prepares you for the day. Countless versions exist, but they all contain rice noodles and an aromatic broth seasoned with shallots, ginger, fish sauce, salt, and spices such as black cardamom, fennel, cassia, star anise, and cloves. Right before the broth is ladled into the bowl, the cook may add meat, onions, cilantro, scallions, and black pepper. The original pho, the style I grew up eating, first appeared around the late 19th century, in Nam Dinh province, southeast of Hanoi. It’s a simple soup, reflecting the unfussiness of northern Vietnamese fare. My parents, born in northern Vietnam in the 1930s, recall that their pho contained nothing more than noodles, beef, and broth. The pho bo (beef pho) recipe in the classic Vietnamese cookbook Lam Bep Gioi (Cooking Well), first published in 1944, echoes that simplicity; it calls for rice noodles, beef, scallions, fresh herbs, broth, and black pepper.

While no one is certain what “pho” means in Vietnamese, many believe it stems from France’s pot-au-feu, a beef and vegetable stew. Some say that French colonialists, who occupied Vietnam from 1883 to 1954, slaughtered huge quantities of cattle to satisfy their appetite for beefsteak, and resourceful Vietnamese cooks used the scraps and bones to create pho. When the country was split into North and South Vietnam in 1954 under the Geneva Accords, northerners, migrating south to escape the Communists, brought their pho culture with them. South Vietnam was agriculturally and economically richer than North Vietnam, and southerners cooked with greater flourish. The southern Vietnamese version of pho that emerged was supersized and included fanciful add-ons such as meatballs, tripe, and tendon as well as fresh herbs, sprouts, and bean sauces. The fall of Saigon in 1975 sent a wave of southern Vietnamese abroad, which explains why most pho shops outside of Vietnam offer the bodacious southern-style soup.

In our household, my mother felt these extras were distractions. “Adding those things ruins a good broth, the essence of pho,” she said. I’ve made four trips back to Vietnam since 2003 and sampled pho from north to south. On my most recent trip, last summer, I finally understood what Mom meant: the best renditions I found were all pho bac in Hanoi.

Take the version at pho Gia Truyen, which many say serves Hanoi’s finest pho. I arrived at 6:30 in the morning at the unadorned storefront in the old quarter, where, as with many pho shops, there is a work station on the sidewalk manned by cooks. I found a stool between two locals and dived in. It was hot and humid outside, but the broth was restorative. I observed diners adding vinegar-soaked chiles to their bowls. I was surprised because I avoid putting lime juice in pho; it clouds the broth and dulls its nuance. However, the chiles brightened the dish without overwhelming it.

Later that morning, I noticed a pho vendor in the nearby market tossing a spoonful of MSG into each portion. When I later spoke to my cousin Le Thu Quyen, a Hanoi home cook, she told me that she prefers to use sa sung (dried sea worms) in place of MSG to naturally add savory sweetness to the broth.

The pho I ordered at the Spices Garden Restaurant, in the Sofitel Legend Metropole Hotel in Hanoi, was my favorite. The broth was clean and balanced. Chefs Nguyen Thanh Van and Nguyen Thi Kim Hai told me that they seasoned with salt while the soup was simmering and added fish sauce only at the end.

With this newfound knowledge, I returned home, determined to replicate what I’d tasted in Vietnam. For the broth and cooked beef, I simmered bones and meat from grass-fed cows, since those are closer to what’s used in Vietnam. To the pot I added charred and peeled shallots and ginger, along with toasted spices, dried scallops to naturally mimic the effect of MSG (as my cousin does with sa sung), and salt. I strained the broth, then seasoned it with fish sauce, as the Spices Garden chefs had suggested. Wanting to serve it for breakfast, I refrigerated the broth and meat overnight. The next morning, while I reheated the broth, I sliced the beef and garnishes. I steeped chiles in rice vinegar for adding at the table, as they do at pho Gia Truyen. Then I assembled a meal, softening the rice noodles in water before placing them in the bowl. I laid the beef on top, followed by onion, scallions, cilantro, and black pepper, and ladled the broth over top. The pho was the best I’d ever made—as always, I finished every last drop.

See “The Elements of Pho” »