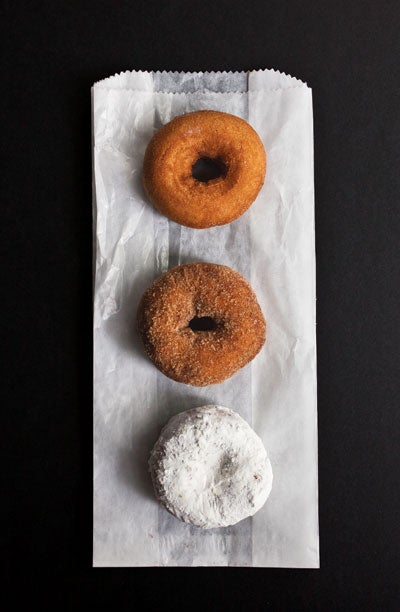 The farmers’ market in Oak Park, Illinois, the Chicago suburb where I grew up, is a giddy scene. Chicagoans endure rough winters, so there’s nothing like an earth-stained table covered with sun-ripened tomatoes to buoy the spirits until the next frost. Still, it’s not the produce alone that makes shoppers happy; it’s also the doughnuts. For 33 seasons of Saturdays, members of the Pilgrim Congregational Church (whose parking lot houses the market), and volunteers from other nonprofits, have arrived at 3:30 a.m. at the church basement—outfitted with a mixer, deep fryer, and doughnut dropper—to churn out treats for a nonstop queue. Plain or rolled in powdered or cinnamon sugar, the doughnuts are warm and sweet, with a melty crumb and a crackly, fresh crust. Today, whenever I visit my parents during farmers’ market season, I make my way over to the church parking lot with one thing in mind: a doughnut. I stand with old friends in the shade, dunking a cinnamon-sugar doughnut in a cup of apple cider and chatting between bites, as summer lingers on.