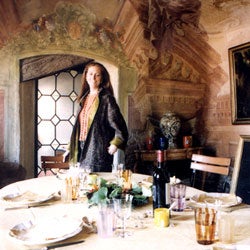 We step off the dock alongside the Metropole Hotel into a sleek, wood-hulled water taxi. “Palazzo Brandolini, per favore,” we say casually to the driver—as if motoring off to a Venetian palace were an everyday thing for us. The January sun glances off the water in bright confetti sparkles and warms our faces, and a salty breeze ruffles our hair as our boat purrs out into the Grand Canal. Now this, we think to ourselves, is Venice in style …

Anyone who has been to Venice, or even seen it in the movies or on television, has probably fantasized about peeking inside one of the magnificent palaces that face this celebrated waterway. What’s beneath those gracefully arched Venetian window frames along the Grand Canal—we can’t help but wonder—or behind the dark-green shutters set into those glorious façades? We’re about to find out: Count Brandino Brandolini d’Adda and his French-born wife, Marie, have invited us to lunch.

The Brandolini family, once masters of arms near Ravenna, on the Adriatic coast of Emilia- Romagna (brando is Italian for “sword”), bought the 15th-century Palazzo Giustinian—an ornate Gothic palace on the portion of the Grand Canal known as La Volta (the bend)—in 1850. The present-day Count Brandolini married Marie Angliviel de la Beaumelle in 1987 (her uncle is a Rothschild, and her stepfather is the director of the Louvre; Brandolini is an Agnelli) and the two now divide their time between their Venetian palazzo, where they live on the top floor and the rooftop terrace above it, and the Brandolini country estate at Vistorta, in Friuli. Brandino (who studied agricultural economics at Texas A&M) supervises the production, at Vistorta, of an excellent, full-flavored merlot. Marie, meanwhile, has become one of the most talented contemporary glass designers in Venice, selling her work under the name Laguna B.

Arriving at their palazzo, we enter through a cavernous ground-floor hallway (nobody lives at canal level in these huge old palaces; once you experience the acqua alta—the high water—you’ll understand why) and take an elevator upstairs. The Brandolinis welcome us, first into their warmly furnished, quietly elegant living room, where the sunlight picks out masses of vivid orchids (grown by Brandolini’s father at Vistorta) and glances through some of Marie’s light-as-a-feather, carnival-bright glass. Then we climb a narrow spiral staircase up to the terrace, where we nibble cheese biscuits and sip prosecco, made for Vistorta and poured for us by a white-jacketed waiter who looks very familiar (he is Claudio Ponzio, a 30-year fixture at Harry’s Bar). Standing on top of this historic palace, on a clear, unseasonably pleasant day, we chatter about Venice and pick out landmarks—the Campanile, the domes of the Basilica of San Marco, the incongruous patch of scaffolding that marks the site of the scandal-ridden La Fenice opera house, destroyed three years ago by fire and still being rebuilt.

Then Marie and Brandino lead us down into a frescoed dining room accented with leaded glass and green velvet drapery, where we sit down to a splendid, at least partially Venetian repast. We begin with big, fluffy, snow-white poached eggs set in an avalanche of cubed gelee, rich and salty-sweet. Next comes a savory torta rustica, full of ricotta and zucchini, followed by a textbook-perfect scampi-and-radicchio risotto—modern Venetian fare at its best. A platter of simple veal scallopine, perfectly browned and framed with lemon slices, follows; there is a simple salad of assorted greens dressed in olive oil and vinegar on the side. We finish with the house dessert of Vistorta, an irresistible, flourless chocolate cake.

Sitting there finishing our Vistorta merlot, with this beautiful, talented, interesting, and amiably generous young couple, we can’t help feeling that—despite the doomsayers and the statistics—Venice might have a vital future after all. And when we leave, walking back through the streets of Dorsoduro this time, instead of taking a water taxi, we think, Now that was really Venice in style.