The city of Cologne, Germany, is home to what may be the world's most refreshing ale 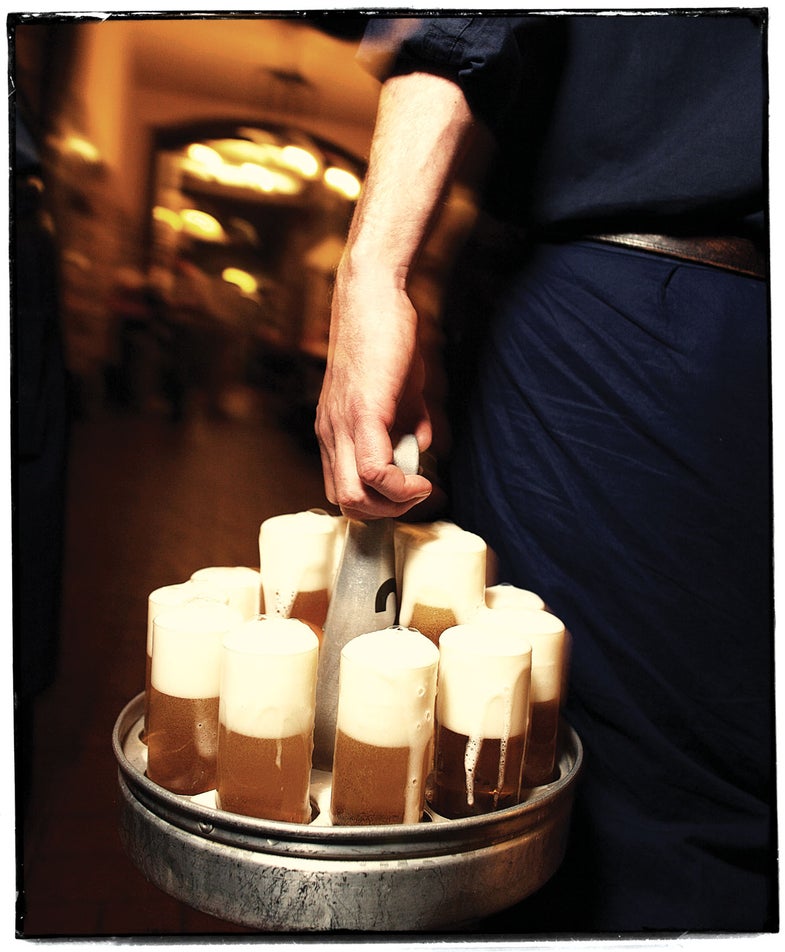 Like many tourists, on my initial visit to Cologne in the summer of 1998, I made my first stop at the Cologne Cathedral, the Gothic-style masterpiece that towers over the city. My second stop was right next door: Fruh am Dom, a cavernous beer hall that pours the town’s signature style of ale, kolsch.

I remember how the server arrived at my table and, in the highly ritualized fashion that is customary in Cologne, pulled a small, narrow glass called a stange filled with pale, foamy brew from his circular, handled tray and placed it atop a coaster, which he marked with a tick of his pencil. I sipped: Crisp, mild, subtly fruity, that refreshing kolsch took the edge right off the hot July day.

As soon as I finished, my stange was wordlessly replaced with a fresh one, and another pencil tick was added to the coaster. Since the typical stange, a slender cylinder whose name means “rod” in German, holds a mere 200 milliliters, about 6.75 ounces, of beer, I could drink quite a few, so this ceremony went on for some time. Finally, taking a cue from the locals surrounding me, I put a stop to the proceedings by placing the coaster on top of my glass. The server then added up the pencil marks, multiplied them by the price of a stange, and scrawled the total on the coaster, transforming it into a beer-stained tab.

As I found out, the trappings surrounding kolsch reflect its esteem here as well as its uniqueness, for kolsch, an ale that goes down like a summer lager, is a beer unlike all others. Most of Germany is known for its golden lagers—pilsner, helles, marzen, and the like—which are fermented slowly at lower temperatures using cold-loving lager yeasts. Lagers, particularly suited to chilly northern climes like Germany’s where they can be aged in caverns and frigid cellars, rose to prominence in the 16th century, joining the ales that preceded them. But lagers back then weren’t so light. Germany’s blonde lagers date to the mid-1800s, when advances in kilning technology made the production of pale malts possible.

Combining lager yeasts and the newer, lighter malts, brewers created a crisp, golden beer style that became the talk of Europe—except in Cologne, a city whose conservative traditionalism has long been one of its trademarks. There, brewers stood resolute in defense of old-style ales—heavier, darker, more dimensional beers that fermented more quickly at warmer temperatures.

But progress was not on traditional German ale’s side. By the late 19th century, given lager’s popularity, Cologne brewers figured it was time to meet the competition head on. So they kept their ale yeasts but adopted the paler malts that had become so fashionable in lagers, as well as lager’s longer, cooler conditioning. What resulted was a beer as thirst-quenching as a lager, with a milder flavor than other ales but nearly as much complexity. In Cologne, the style proved a hit, and breweries, from the brightly lit, rambling Brauhaus Sion—one of the city’s oldest, founded in 1318—to the homey, fourth-generation Brauerei Pfaffen and others, now serve none but kolsch.

It’s great stuff. Technically an ale that’s made like a lager, Cologne’s native beer finesses the divide between the two, borrowing from each to become something more balanced and delicate altogether. Most kolsches have a light fruitiness up front—soft peach or apricot or a hint of something lemony but nowhere near the big berry or citrus flavors you might find in other ales. The hoppiness, too, is nuanced, rarely approaching the bitterness of even a mild pale ale, while the body of a kolsch is crisp on the palate but without the dry austerity of a lager like pilsner.

Wonderfully thirst-quenching and approachable, the style is great for pairing with sausages and other hearty foods served in Cologne beer halls. Those halls are the only places to experience some of my favorite kolsches, not to mention the ritual of drinking them. In 1985, recognizing the singularity of its beer, the Cologne Brewers Association campaigned successfully for some of the strictest regulations governing beer production anywhere. These days, when even the size and shape of the stange is legislated, breweries must be located in and around Cologne to call their beer kolsch. Many of these don’t send their beer abroad.

But some imports are available here at home, along with American beers made in the kolsch style—Saint Arnold Brewing Company’s zesty Fancy Lawnmower beer, New Holland’s more austere Full Circle, Four Peaks’ bracing Sunbru. Drinking these, I’ve found that the style also goes great with milder summer foods. Salads, grilled fish, steamed seafood—kolsch never overpowers these dishes, but rather enhances the meal with a sly complexity that sneaks up and hooks you.