A quest for culinary redemption in Central Florida 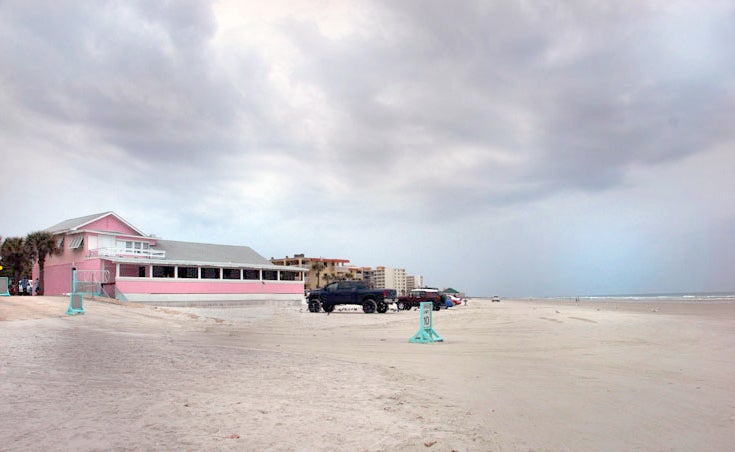 On our first date, my wife Amy and I went to a Brooklyn restaurant called Cornelius, a place known for its sumptuous fried oyster po-boys and ample selection of bourbon and single-malt scotches. On our second, we went to Franny’s, another Brooklyn spot, one heralded by the New York pizzerati for its exceptional clam pie. The third date was a crawfish boil at a Ditmas Park bar; the fourth, a feast at Northern Spy, a Manhattan farm-to-table restaurant whose menu forever changed my attitude toward kale salads. We both took pleasure—great pleasure—in showing off our knowledge of restaurants to each other. For every soul food shack she introduced me to on Flatbush Avenue, I showed her a dive bar in Red Hook that had somehow escaped her attention. Our relationship unfolded over roasted brussels sprouts and hanger steaks, fried fish sandwiches and duck-fat fries, micro-brewed IPAs and brandy old fashioneds.

It was months before our engagement when Amy and I traveled to New Smyrna Beach, Florida, so she could meet my mother for the first time, and on that trip I was determined to add to my culinary capital by taking her someplace unexpected—someplace that would leave her stunned and amazed over my abilities to track down gustatory pleasures in such an otherwise culinarily unsung part of the country. This took some research. After all, Central Florida is not exactly known for—well, anything really—when it comes to food. So after we arrived, I took to mom’s AOL dial-up, scouring at a snail’s pace for food blogs that would clue me in.

It’s not that I’d never enjoyed a meal in Volusia County, where New Smyrna’s located. Since my mom moved there in 1988 with my late stepfather, Ted, she’d taken me to dozens of places; while many were “are-you-kidding-me”-level awful, some were surprisingly good. There was The Downwind Cafe, a woody comfort-food restaurant located in a subdivision designed for small aircraft owners (each multi-gabled mini-mansion has its own airplane hangar) that serves an admirable Caprese salad. Atlantis Bistro, a friendly Italian red-sauce joint on Flagler Avenue run by a spunky Italian woman, on whom I’d always harbored something of a crush, offered a mighty fine marinara sauce. And there was the bizarre little chain restaurant Mr. Dunderback’s in the Volusia County Mall, the place Ted used to take me for bratwursts and beer after he’d freshened up my wardrobe with some smart new shirts and shoes at Dillard’s.

But for this visit, I needed something special, something really special: an unexpected and off-the-beaten path sort of place that would leave Amy saying about whatever she’d ordered, “Wow, that’s the best I’ve ever tasted!” Despite the torturously slow land-line internet connection, my research yielded a few promising write-ups, the most laudatory being a seafood shack about 40 minutes away. “My wife and I come here every time we’re in Florida,” one Yelper wrote. “And we’re from New York!”

And so Amy and I headed out. Behind the wheel of our rented canary-yellow Chevy, I had images of a rustic oceanfront dive with hearty fish stews served along frosty pints of Guinness, a place that would look, as all iconic seaside

joints do in my mind, like it was straight from the set of the 1980 film Popeye, starring Robin Williams. (Which, by the way, was directed by Robert Altman.)

But what we found was anything but. The place had all the charm of a recently redecorated highway-exit diner: the ceilings were dropped, the carpet was paisley, a Michael Bolton song filled the air, and the chowders and fish sandwiches we ordered were fresh from the freezer. The drive back to my mom’s house was undertaken in silence, the only words uttered ten minutes in, when Amy, sensing my humiliation, rested her hand on my knee and said, “It’s okay, sweetie.”

Later that night, at the chain restaurant in Ormond Beach where my mother took us to dinner, I found myself feeling jealous, actually jealous, when Amy gushed over the “Bleu Cheese Chips”—a molten pile of fresh, thick-cut fried potatoes tossed with herbs, sticky balsamic vinegar and melted blue cheese—that we ordered as an appetizer. I had been outdone by my own mother, and the Stonewood Bar & Grill chain. (To be fair: those Bleu Cheese Chips were superb.)

When we traveled back to New Smyrna this year for the holidays, I was determined to redeem myself for last year’s failure. On the afternoon of Christmas Eve, I spent nearly three hours slogging through the dial-up, searching for restaurants that had escaped my attention in last year’s search, hoping we could visit the lucky winner on one of the two extra days we would be in town after Christmas. Again, a few promising reviews came up: a place called Fish Camp over in Ormond Beach, an Italian restaurant run by two genuine Neapolitans along an interstate highway, and two restaurants serving Minorcan cuisine in St. Augustine—a 70-mile drive away, but worth it for the redemption of my pride.

Amy called at me to hurry up as I jotted down the restaurants’ addresses on a sheet of paper. We’d forgotten to buy mom’s new boyfriend, Wendell, a Christmas present, which meant we were locked into a last-minute gift search downtown before Christmas Eve dinner. On our very first stop, the ever-attentive Amy found a beautiful guidebook on identifying different cockles, clams, conches and cones—she’d heard Wendell talk about how his late wife once ran a business making jewelry out of shells.

After finding the gift so quickly, we had some extra time on our hands, so Amy, who was starving, suggested we go someplace to grab a snack before dinner, and I felt a sense of panic set in. We didn’t have much time before people started to arrive at mom’s house, so we couldn’t go far. I’d already noticed that the nearby Italian restaurant—the one run by the cute lady—had closed early, and there was nowhere else I could think of to go. Once outside, I gazed down Flagler Avenue, locking eyes on a cheesy pink building near the shore, the large plastic banner nailed to its siding advertising some sort of special on buckets Bud Light Lime.

It was called The Breakers, and while I’d been there during my pre-gourmand college days with mom and Ted, I didn’t remember it at all. I figured it would be mediocre at best—another nail in the town’s (and my own) culinary coffin. My confidence in the place wasn’t exactly bolstered when, as we pulled into the parking lot, we watched as an emaciated, leather-skinned biker, who uncannily resembled the real-life version of Floyd Pepper, stumbled outside the bar and down the stairs, then wandered aimlessly toward the beach. “I’m scared!” Amy chirped.

But what we found inside wasn’t scary at all. In fact, it was downright revelatory. This place that had somehow escaped my memory was a genuine seafood shack, its walls wainscoted in gnarly old wood, its scuffed-up tables and chairs looking as if they were taken from a late 19th-century Boston Harbor barroom (maybe so: as I later found out, the former owners, Irish-Americans, operated several bars in and around Boston for nearly a century before opening this place). It was filled with shiny, happy people: both barstool-perched regulars and extended families in for the holidays, everyone munching on fried shrimp and sipping from longneck beer bottles. On the ocean-facing side of the dining room, couples young and old sat at a long counter staring dreamily out toward the ocean, Coronas in hand. This, I thought to myself, is it.

As soon as we were seated, Amy grabbed a menu with a look of pure, unadulterated glee. “Oh my God,” she said. “This place is awesome!” “Let’s get the steamed shrimp!”

“Who cares,” she replied. “Why don’t we come here all the time?”

And so we sat there at our table, staring out at the Atlantic, carelessly peeling shrimp of unknown pedigree, and washing them down with the kind of cheap beers it never even occurred to us to drink back in Brooklyn. There was sawdust on the floor, the aromas of a faraway deep fryer filled the air, and men in polo shirts and khaki shorts sat at the knotty-pine bar, watching college football on TVs. After a while, I lost myself in one of those games, too, my fevered mind finally at ease. There would be no more online searches or long drives to St. Augustine. Florida had shared with me the secret it’s shared with so many others throughout the years: it’s perfectly acceptable to just kick back along a beach, relax, and keep things simple.