Meats of the Deli

The meaty appeal of most new-world Jewish delis stems from that fact that most began as kosher butcher shops. 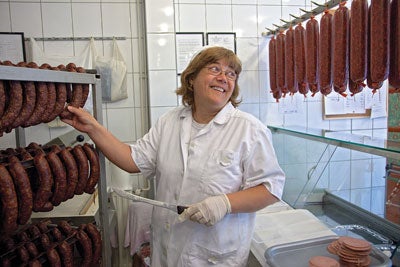 In fact, you can trace the most common deli meats—pastrami, corned beef, pickled tongue, and salami—to venerable eastern European traditions, all of which began, in part, because the practice of salting meat is a requirement of kosher certification.

The method for making pastrami dates as far back as the Byzantines, and in Romania curing meat with salt and spices remains a favorite way of dry-curing mutton and beef. Romanian Jews adopted this preparation, mainly for goose breast, which was served cold and thinly sliced as an appetizer. When Romanian Jews settled on New York’s Lower East Side, beef was more plentiful and replaced goose as the protein of choice, and pastrami started to be served hot, as a sandwich, so that the local garment workers could eat it on the job. Making pastrami—from either the brisket or the navel, both tough, sinewy, cuts of beef—involves a series of processes: salting; rubbing with a mix of garlic, pepper, coriander, mustard seed, and sugar (among other seasonings); and smoking. The meat is then steamed until tender, and sliced, preferably by hand.

The tradition of making corned beef and pickled tongue likely originated in England or Ireland in medieval times; it was later adapted by Ashkenazi Jews in Germany. Briskets and whole tongues are left to marinate in salty brine infused with garlic, sugar, and bay leaf. After a week or so, the meat is removed, rinsed, and boiled until tender, then sliced hot.

The old-world meats that most closely mirror what you find in the United States are the ground-beef sausages and salamis, often made in regional styles: frankfurters in Germany, paprika-heavy kolbasz in Hungary, mititei sausage in Romania. Placed on rye bread and topped with mustard, these beautifully seasoned meats are a highlight of Jewish delis around the world.