On The Backs of Crabs 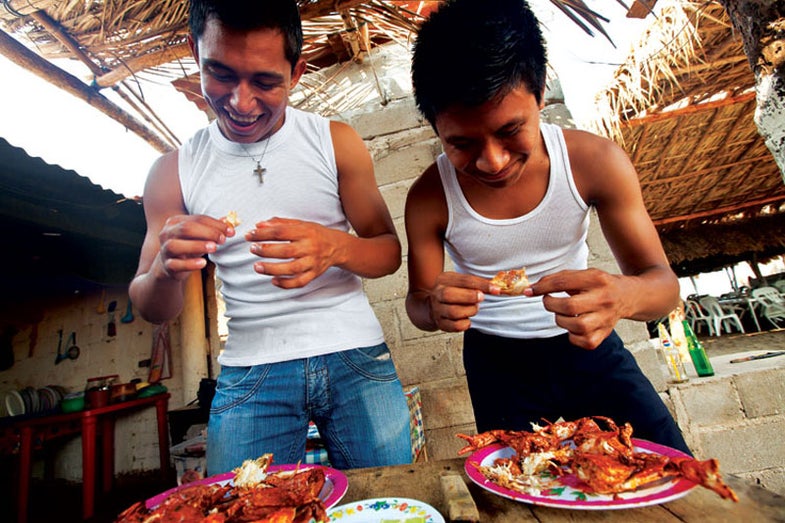 One of my first memories is of the sound of crabs being crushed by the wheels of our moving car. I was less than five years old. It was late at night. For three days we had been traveling—my parents, my mother’s siblings, and my maternal grandmother—from our home in Mexico City east to Comalcalco, in Tabasco, where my grandmother and mother were born. We’d crossed five rivers on rough-hewn ferries, little more than rafts. We’d left good roads behind and were driving on an unpaved one, steps from where waves were crashing.

I was snoozing in the backseat. The noise woke me up. I asked what it was. “They’re crabs,” said my uncle Gustavo, who was at the wheel. I didn’t understand his answer. I knew what crabs were. My grandmother cooked them at her house in Mexico City. The legs and claws were steamed and served cold as an appetizer. The bodies, stuffed, came piping hot as a main course. Both were delicious. But what were crabs doing here?

My uncle and my grandmother explained that this was the time when crabs returned to the sea to lay their eggs, and that we were rolling over a carpet made of marching crabs. Our Goodrich tires were decimating them by the hundreds. The noise went on for what seemed an eternity.

My grandmother’s stuffed crabs were one of my favorite dishes. From Tabasco her siblings sent live crabs packed in cardboard boxes, and I watched her unpack them and put them in the metal tamal-maker on the stove. I heard the crabs scratching inside, but I never saw how the stuffing was prepared. I only knew it tasted earthy and pungent, salty and sweet at the same time.

I spent many mornings watching my grandmother work in the laboratory in the back of her home—another sort of cooking. Her business was mixing ingredients, primarily herbs, for the pharmaceutical industry. That was how she earned her living (and not a bad one) after the death of her husband. There were big cans of alcohol, filter paper, oils, extracts. Sacks of herbs and seeds were kept in the courtyards. The smell was complex and, to me, attractive.

I saw her perform culinary miracles, too. She milled chocolate from cacao pods, also sent from Tabasco. She made tamales wrapped in banana leaves, walnut and almond sweets, a pork sausage perfumed with spices. I watched my grandmother cook, but she was not interested in teaching me to do it. She used to say, “My granddaughters were not born to clean floors.” Her wish was that I would go to college and have a career.

I only learned how she made the stuffed crabs later, after my daughter Marea was born, when I was pregnant with my Juan. I was returning to Mexico City from Villahermosa on a plane, with my little girl in my arms. My carry-on bag was stuffed with crabs. When the flight attendant came looking for the origin of the pungent smell, I put on an innocent face.

Arriving home, I parked the crabs in the bathtub and phoned my grandmother. I wanted to cook them exactly the way she did. Their smell permeated the house; some thought it more stench than smell. But I took pleasure in it, just as I enjoyed the peculiar odors from my grandmother’s laboratory.

I followed her instructions closely. First, I steamed the crabs, hearing the familiar scratching in the pot. Then I emptied their bodies and claws, extracting every bit of meat. For the filling, I chopped onion and a bit of garlic, and fried them in olive oil. Once the onion changed color, I added green olives, capers, raisins, almonds, salt, fresh herbs, and finally the crabmeat. I stuffed the bodies, sealed them with egg whites and bread crumbs, and fried them just long enough to make them golden and beautiful. And yes: The taste of those crabs, like the sound of them under the wheels of our car, was something unforgettable.