A Taste of the Past

A daughter comes to terms with her father through his childhood foods. 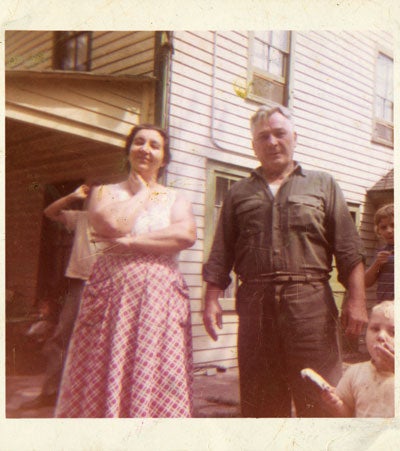 My father is sobbing. With calloused fingers, he wipes tears from his eyes, which are two different colors, one green and one brown. He’s an emotional guy, given to booze-fueled joie de vivre, blistering anger, and when he’s telling half yarns about himself, a sort of megalomaniacal glee. But I have never seen him like this. He says hesitantly, and with a slush to his words, “I wanted so badly for you to be able to write that story.”

It is Father’s Day at the hospital. The land has been sold. The cottage has been cleaned out. And my father, who thought that his blood thinners were bothering his stomach, and so stopped taking them, has had his second stroke.

Some years ago, I came up with a joke that made my sisters and brother laugh. “Help,” I’d say. “Dad is threatening to teach me how to make haluŝky.” It was funny because it was true—and because the distress was only partially mocking. Anything my father offered to teach us carried with it his dangerous impatience. It carried with it, too, his self aggrandizement. “Tell me,” he would have said, “doesn’t your daddy make the best haluŝky ever? Tell me.”

The food, though, was the funniest thing in the joke. Four suburban Philadelphia kids with a mother we adored who served us takeout pizza and Chinese food, what did we know from haluŝky? Boiled, hand-fashioned knobs of flour and potato, haluŝky came from another world. And so did my father.

He wore ascots and drove Rolls-Royces. He liked flashy restaurants and cocktail lounges. An enthusiastic cook with gourmet aspirations, he made a show of dinner: bouillabaisse followed by lobsters and crabs; sukiyaki cooked on an electric flattop in the center of the dining room table. He taught me how to drink. “Your daddy’s a millionaire,” he’d boast, raising a tumbler of Crown Royal. He joined the country club. He flew Pan-Am.

But that was not where my father was from. He was born in 1928 in the Pocono Mountains, the second of five brothers, part of a generation of offspring of Eastern European immigrants who came to northeastern Pennsylvania at the turn of the 20th century to work in the anthracite mines. These folks called themselves Coal Crackers.

His father, Andrew Andrews, nee Pacusa, was from the former Czechoslovakia. A schoolteacher, he had mined coal when younger. He died of black lung disease when I was a small child. My father’s mother, whom we called Grandma Andrews, was born in the Poconos to Ukranian immigrants. A prodigious talent in the kitchen, she cooked a vast repertoire of delicious, calorie-rich dishes, both Eastern European and American, to fortify the body for hard labor, and to stave off the chill in a place where it snows in April. She was stout of body and heart, a devout Catholic who liked to feed family and neighbors. She dug holes in the ice of Lake Wallenpaupack to fish for striped bass. Her sons—not my father, but the ones who had stayed on the mountain—brought her fresh deer meat, and she turned it into venison kielbasa.

Once a year in summer, we would visit my grandmother on the lake, where she ran a small resort at Ironwood Point: a handful of cabins, some rowboats, and a general store stocked with fishing gear, bug spray, and jars of pickled eggs and penny candy. Once a year in winter, my grandmother would stuff the contents of her pantry into her station wagon and drive down from the mountains to preside over an enormous Christmas dinner at our house: sweet baked ham, roast turkey with all the trimmings, homemade pumpkin pie and whipped cream-laced “pumpkin puffs” made with pate a choux, blueberry pies filled with the fruit she canned from the bushes that stained the cabin porches purple in summer.

But the best foods she made were Eastern European. My Grandma Andrews’ potato pierogies were melt-in-your-mouth; we ate them boiled, topped with caramelized onions. My mother was leery of Grandma Andrews’ wild mushroom soup, but we devoured it anyway; it had just a bit of the tang that characterized her kapusta, or sauerkraut soup. My father pan-fried her kielbasa, and we slathered it in spicy, stone-ground mustard. My siblings and I loved her kolaĉki, sweet rolls filled with nutmeat, poppy seed, or prune.

We even ate her haluŝky, though they were so basic, bland, and monochrome that they barely seemed like food to us. Back in my grandfather’s native country, these simple dumplings—the Slovakian national food—might have been dressed in bacon and a sheep’s cheese sauce. But the old-world cheese was hard to come by, and bacon was probably too expensive for my grandparents in the early years, so my father’s family had acquired a taste for haluŝky topped with homemade sour cream and cottage cheese. It wasn’t my favorite.

In her seventies, my grandmother retired farther up the mountain to a piece of land with a two-bedroom cottage and a view from the ridge of the Waymart State Correctional Institution. My father rarely saw her. A Korean War veteran who couldn’t afford shoes, he had gone through college on the G.I. bill still wearing his combat boots. As a kid, he picked stray lumps of coal from the dross at the dump for the family to burn as fuel. He thought his father a genius whose environs squelched his ambitions. My father, for his own part, had been determined to leave the place behind.

Grandma Andrews died when I was in my early thirties. She left her land to my father and his brothers, and my father, older and too broke now for anything fancier, took to it as a weekend retreat. That’s when he started trying to talk to me about things like haluŝky.

I didn’t visit my father at the cottage until I started writing about food and figured that I should learn something about my grandmother’s style of cooking, the dishes that spoke of her immigrant roots. With her gone, there was only my father to rely on. He took to the task of guide with vigor. I awoke the first day of my up-country visit to the smell of onions frying in my grandmother’s cast-iron pan. My father was cooking pierogies. He had bought them off a little old lady on the mountain nearby. I ate them with the onions.

Then we went into town—Waymart, Pennsylvania, population 1,412—to visit Frank Kacer at Kacer’s Kielbossa, the butcher shop he owns on the main drag. Kacer’s brother, Michael, a rangy Vietnam vet in a baseball cap, was smoking pork kielbasa out back in a rehabbed firehose closet. Kacer hacked a hunk off a link still steaming from the smokehouse. It was warm, dense, and garlicky. There were signs taped up inside the store advising customers to bring their felled deer in to have them processed for kielbasa.

We stopped also at the home of Debbie DiMedici, the proprietor of a bakery in nearby Honesdale. DiMedici, whose maiden name was Ostyn, had learned to bake from her Polish grandmother: babkas, kruŝĉiki (angel wing cookies), rugelach, kolaĉki. She described how to make Russian tea balls like my grandmother made them: melting little spheres baked with ground walnuts and rolled in powdered sugar once when warm and once again when cooled.

Back at the cottage, my father tied one of my grandmother’s old aprons around his waist, set a pot of water to boil, and proceeded to make haluŝky. I watched him form the soft, potato-rich dough and drop dollops into the roiling water. We ate the haluŝky with sour cream, cottage cheese, and plenty of salt and freshly ground black pepper. They were warm and earthy and fatty and filling; they were delicious, in fact. Then my father sent me off with a car trunk stuffed with up-mountain foods and the plea that I, one day, write an article on him and Coal Cracker cuisine.

He sent me off, too, with a new understanding of who he is. For some reason—probably because he didn’t want me to—I had never before been able to connect him with my grandmother’s mountaintop. But the years had mellowed my father. He still drank, but not as much. The Rolls-Royces, rehabbed from junk heaps he had bought on the cheap as a much younger man, had all been sold or sat fallow in his warehouse, collapsing back into heaps. His business—he was a hardworking engineer with a boom-and-bust history—was only sputtering along. He wasn’t living his dream of the high life anymore; now he was who he was: an up-country boy who had somehow found peace puttering around his mother’s kitchen wearing his mother’s apron.

Then my father’s life changed again. Another prison—a maximum-security federal facility—rose from farmland on the other side of the ridge. My fathers’ brothers, needing money, insisted that my grandmother’s land be sold. And my father, who didn’t believe in doctors, had his first stroke. Then he had his second one.

But my father could have saved his tears. Recently, I called him to get a recipe. He dictated it slowly over the phone, struggling to enunciate the words. Tonight, I will grate potatoes; I will mix them with flour and eggs, and also some onion, to make a dough that is not too loose or too dense; I will scoop the dough up with a teaspoon to form little dumplings and, as I have a few times already in the past weeks, drop the dumplings in boiling water and fish them out when they’ve popped to the top. Then I’ll eat them topped with sour cream, carmelized onions, and crumbled bacon, and I’ll enjoy them immensely, for my father has finally succeeded in teaching me how to make haluŝky. And the story that my father so longed to have me write? Well, it might not read the way he had imagined it. But this is my story—or it’s our story, for better or worse, his and mine—and with his help, I’ve finally written it.

See the recipe for Haluŝky »