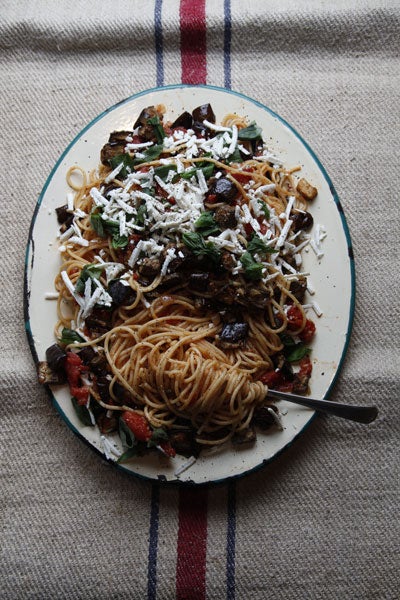 This simple pasta dish is made with tomatoes and eggplant. Todd Coleman
SHARE

Growing up in Italy taught me to eat locally and seasonally as well as simply, but over the years it’s become harder and harder to find thoughtful, high-quality food at casual, easygoing places. Which is why I’ve become so inspired by the chef Salvatore Denaro in Umbria, who, until recently, had a place in the town of Foligno called Il Bacco Felice. His cooking is fantastic. Though it’s very basic food from his garden, it is beautifully put together: succulent wood-grilled chicken, marinated with a mix of dried herbs including wild myrtle; an Umbrian lentil soup with a secret ingredient of anchovies. He’s originally from Sicily, and his Pasta alla Norma, a Sicilian classic made with eggplant and ricotta salata (right; see here for a recipe), is amazing. Dining with him can be intense: he’s got a wine to pour you, a cheese you have to taste, and don’t you want to see his garden? But whenever I go to Italy, I seek him out, whether that means signing up for one of his lunches and cooking classes at the Arnaldo Caprai winery, or cooking with him at home. Either way, he is my biggest inspiration, for the pure honesty of his food. —Sara Jenkins, Porchetta, New York City