The Freshest Catch: The Fish Market in Catania, Sicily 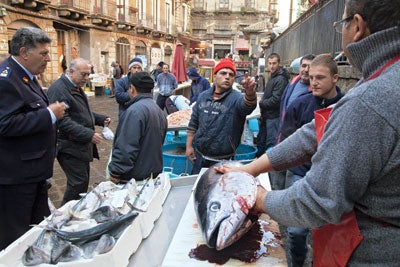 The best way to understand the importance of seafood on the Sicilian table is to visit the fish market in Catania, which is as old as the ancient city itself. I watched it come to life one morning as workers unloaded their catches onto tables full of ice. There were heaps of gyrating octopuses, buckets full of snails and tiny clams, beautiful arrangements of eels and rays and any other form of sea life imaginable. The fish came from Mazara del Vallo, Italy’s largest fishing port, in southwest Sicily, as well as smaller ports famed for specific things: anchovies from Sciacca, swordfish from Favignana. Teenage boys carried espressos in tiny plastic cups from nearby bars to the fishmongers, who—arms flailing and voices raised—were negotiating with housewives and wholesalers and chefs.

One of those chefs was Carmelo Chiaramonte, a Sicilian seafood expert and the author of A Tutto Tonna (Bibliotheca Culinaria, 2006), a fascinating Italian cookbook about the many species of tuna. “It’s Lent, so we’re eating even more fish than usual,” he told me, rattling off a menu as we walked around the market streets: brodo quaresimale (a fish soup eaten on Ash Wednesday); sarde a beccafico (sweet-sour fried sardines stuffed with currants); spaghetti tossed with sea urchin, or with neonata (teeny just-born whitebait), or with slivers of bottarga (salt-cured tuna roe), to name just a few. Carmelo bought a handful of bright-red raw shrimp, just in from the Gulf of Catania, and led us to an outdoor table at a bar. He handed one to me, raw, and the shrimp’s soft flesh melted on the tongue like sweet, salty butter. It was the most pristine and delicious seafood I’ve ever tasted.

“Sicilian food is all about the sea and the land,” Carmelo said, pulling out fresh ricotta and bread he’d bought earlier. That Italian rule that says no cheese with fish? It doesn’t apply here. Here, Pecorino gets sprinkled into involtini of swordfish and ricotta gets stuffed into squid. As we snacked and sipped zibbibo, a floral white wine that’s often served with fish, Carmelo talked about the ancient fishing methods that many Sicilian fishermen still hold on to, like the elaborate mattanza nets used for harvesting tuna. By the time we finished our meal, the market had closed up shop and the streets were empty.