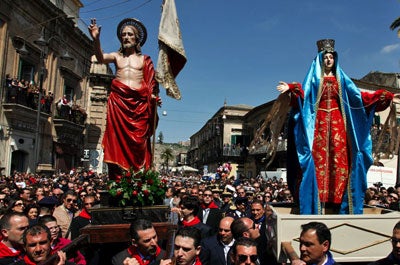 There was a reason we came to Sicily for Easter last year: during the week leading up to the holiday—settimanasanta, as it’s called—there’s a special energy in the air. You feel it in the markets, where butchers are busy trimming baby lambs for all the family feasts; at bakeries, where shoppers stock up on colorful breads adorned with eggs; and in the streets, where at any given moment you might catch a chord of distant music from one of the many processions moving through town.

These processions, which reenact the story of Easter, set the mood for the holiday. On Holy Thursday in Trapani, I stumbled across a parade of people following a gilded, grief-stricken statue of Mary. Children’s faces were hidden under black veils and the band played Sicilian funeral marches. It took more than a dozen men, their arms interlocked and faces contorted with effort, to carry that statue through the streets.

Sicilians plan their days and meals around these processions. I met up with Italian food writer Roberta Corradin and her friend Giovanna Giglio Cascone for pastries in Noto right before a Good Friday parade: a solemn one in which people walked through the torch-lit town in complete silence. On Saturday, we made plans to join Giovanna’s family at another procession, but first we’d have lunch at her home in Ragusa. Giovanna prepared all the local Easter specialties: scaccia ragusana, a delicious roll-up of paper-thin dough slathered with tomatoes and Pecorino; succulent leg of lamb with rosemary and potatoes; impanata di agnello, lamb-and-parsley-filled pastry pies—all of it cooked in her wood-burning oven. The meal was the acme of Sicilian home cooking, and it went on for hours, long enough for some guests to break away to watch a soccer game or grab a nap before coming back for dessert.

Easter is, without a doubt, the most delicious time of the year in Sicily. All the spring foods—the first artichokes, the baby lamb, the tender fava beans, the ricotta, which is at its richest and most herbaceous—play into the holiday’s spirit of renewal. In Palermo, I encountered another kind of spectacle at the Ballaro market, where vendors belted out operatic odes to their ingredients. “Fragole, belle fragole! Ti fanno sentire vivo! [Strawberries, beautiful strawberries! They’ll make you feel alive!]”

On Easter morning we woke up to the sound of trumpets in the town of Modica. The vibe was joyous in the streets as crowds of people followed a statue of the risen Christ, waiting for it to encounter the procession of Mary. When that happened, the music stopped, the crowd hushed, and the two statues slowly embraced. This was the moment that all of the processions had been leading up to and it couldn’t have been more beautiful or resonant. White doves flew out from beneath Mary’s shroud, the music kicked back in, and everyone went home to eat.

Cooking teacher Fabrizia Lanza had invited me to join her family the next day for Pasquetta, the traditional day-after-Easter picnic, at Regaleali, their wine-producing estate in the center of the island. It was a gorgeous day, and Fabrizia grilled baby lamb chops, sausage, and artichokes over an open fire in her courtyard. There were dozens of dishes set out on a table: chickpea fritters; olives flavored with rosemary and orange zest— things Fabrizia had learned from her mother, the late, great cookbook author Anna Tasca Lanza. When she brought out her jewel-toned cassata cake, filled with ricotta cream and rimmed with pistachio marzipan, the crowd complimented her and then descended on it. Fabrizia smiled. “We look forward to this meal all year.”