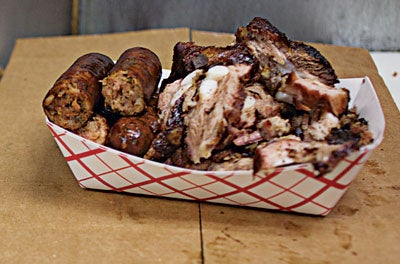 Gas was 29 cents a gallon and I stood on the bench seat to see over the dashboard when I first hit the road to find good eats. My father was a traveling salesman who covered the Midwest in a trophy blue Chevrolet Styleline Business Coupe, and if school was out, I was able to join him. Harry Stern was no bec fin, but he rejoiced in ferreting out such gout de terroir as smoked walleye, Sheboygan bratwurst, and Maytag blue cheese. I relished trips close to home in Chicago, where, at the end of a day on the South Side, we donned our casual, barbecue-eating duds and got messy with big racks of smoked ribs and the rugged pork sausages Chicagoans call hot links.

I was rapt, gazing into the aquarium smokers, so named because their tempered glass walls show the meat as it slow-cooks. Aquariums became the Chicago way of smoking in the early 1950s, when the Lemons brothers opened the definitive Lem’s. It was they who popularized separating a rack of spareribs into ribs and tips. The former are easy to eat; the latter demand tooth-and-tongue work and offer maximum flavor. Rib tips, like aquariums, have become a signature of Chicago barbecue.

Unlike Carolina’s pig pickings and the beef smoke pits that began as annexes of butcher shops in central Texas, Chicago’s barbecue started elsewhere. With the blues, it traveled up the Mississippi to neighborhoods where African-Americans found jobs and community. And like the blues, it originally was rural but developed a thundering urban personality. What electrical amplification did for the music, sauce did for the barbecue. With its main tributaries being Mississippi, Memphis, and eastern Arkansas—places where sauce matters—South Side barbecue earned its chops with sauce that is thick, sweet, hot, and as devastating as Junior Wells’ harmonica riffs in “Lawdy! Lawdy!” In Chicago’s great parlors, sauce is as important as the meat itself. Hence, the white bread slices on every plate. What better way to sop up every last drop?