Street Food on the Half Shell

The oyster may be a pricey luxury food now, but in New York's history, it was the king of the street 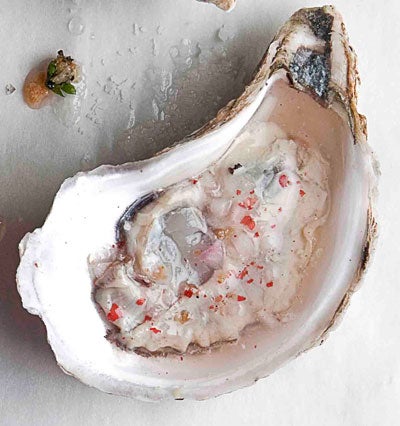 In 1660, Dutch settlers clustered at the southern tip of Manhattan Island, house upon house, facing the curve of the harbor where ships jostled one another for space and trade. If you peered over the jetties and piers that reached into the sea, you’d see oysters the size of dessert plates growing like grapes on a vine, just as clustered, crowded and cramped as the humans in their patch of earth above.

A dirt track was the only barrier between the colony and the port, its path made iridescent by the crushed oyster shells, tossed there first by native Americans who feasted on the roasted mollusks before the advent of the Dutch Settlement; a hundred years later, the shells came from diners patronizing the dozens of oyster carts selling a snack or quick lunch to passersby. City lore says folks began to call the street Paerlstraat — Pearl Street — because of its glow. Within fifty years the island was part of Britain, and Pearl Street was no longer the perimeter as the harbor was backfilled to create more land. For the oyster vendors, America’s first and most beloved street food, these changes mattered little.

In his book The Big Oyster

, Mark Kurlansky described a Manhattan that was oyster-crazed throughout its history, regardless of whether the eater was an 18th century British foot soldier gorging himself on the bivalve bounty, a common man filling his belly from street shacks, or the city’s elite who, by the oyster-frenzied late 19th century, slurped down the mollusks while cocooned at chic eateries like Delmonico’s. The bivalves remained obscenely abundant in New York’s waters well into the beginnings of the 20th century, and street vendors’ businesses flourished. The locations of the oyster carts, often northward scouts into new Manhattan territory, signaled the direction of growth of the city.

In the 1920s, the oyster fisheries around New York and its boroughs closed. Years of contamination from raw sewage dumped into the rivers had destroyed the city’s oyster beds, and New York lost what until then had been the city’s most beloved street food tradition. Demand remained, however, so the molluscs were plumbed up the Long Island sound, to Massachusetts and beyond, and south into Virginia. Brought into the city by ship, the prices rose steeply, and oysters became the costly gourmet product it today.

Excepting a few outposts on Coney Island’s boardwalk and the occasional oyster festival, lately the idea of the oyster as casual street food might have seemed foreign to raw bar aficionados, and even the heartiest street food explorer would likely have raised an eyebrow to a half-shell slurped curbside. But the last few years have brought with them a street food renaissance, one that’s flung wide the gates of gustatory exploration. Carts, trucks, and stands are marching their way back into the American culinary psyche—and edging in along with them are the occasional fresh oysters eaten in the open air.

The time may not yet have come for the return of an oyster cart on every corner, but 2011 has seen the oyster’s gradual return to the New York street. The Oyster Girl stand served raw oysters at the Brooklyn Flea courtesy of Brooklyn Fish Camp. The food concession stands opened at Rockaway Beach boardwalk in Queens, NY include a fish shack with plans for serving shucked oysters. And in April, the New Amsterdam Market reprised oysters as market fare, recreating the oyster saloons serving raw and cooked oysters in Fulton and other waterside markets throughout Manhattan.

Sample shucked local oysters and get bagged oysters for holiday recipes at the New Amsterdam Market’s fourth Wintermarket on Sunday, December 18 in front of the old Fulton Fish Market in Manhattan. The event, “A Gathering of Fisheries,” features local seafood vendors selling their raw and prepared goods streetside including oysters, clams, lobster and more — and it’s a good preview of the market’s Spring Oyster Saloon which will feature oysters prepared a variety of ways, in the manner of the myriad 19th century New York oyster stands. Find out more at newamsterdammarket.org