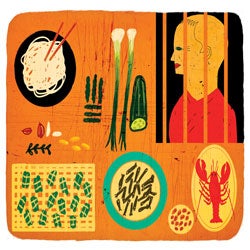 [Editor’s note: This story originally appeared in the March 2007 edition of SAVEUR. Its author, Ma Thanegi is a Yangon, Myanmar-based journalist and a friend to the magazine. Though we have been unable to reach her in the weeks since protests and military violence broke out in Yangon, our thoughts are with her and her countrymen.]

I was such a mischievous kid while growing up in Yangon, the capital of Myanmar (formerly known as Burma), that my uncle Htin Lin predicted I would surely land in jail one day. Mother, ever quick to take the bamboo stick to my bottom, concurred. Years later, their prophecy came true, though it wasn’t until I had reached the (no less mischievous) age of 42. The reason was not murder or mayhem, as Uncle Htin Lin had imagined might be the case, but politics. Still, my relatives probably couldn’t resist rolling their eyes.

It all began in August 1988, when I started working as a personal assistant to Daw Aung San Suu Kyi, the leader of the nascent democracy movement, who in 1991 was awarded the Nobel Peace Prize. Having met Ma Suu, as we called her, through my work in the Artists’ Union, an organization that made political posters, and knowing that my fluency in English might be of help, I offered my services.

From the office that she ran out of her home, I answered the phone, screened letters, took notes at meetings, and accompanied her on campaign trips. By early 1989, the political situation had become precarious, and on July 20, Ma Suu was put under house arrest and I, along with 30 other volunteer staff members, was trucked off to Insein Prison, on the outskirts of Yangon. I was to serve a three-year sentence.

After the first few days of prowling and growling like a cat in a cage, after the first few weeks of believing that I would go berserk if I were held for even another hour, after the first six months of constantly hoping to hear the words “You’re free to go”, I realized I was wasting my time and began to think about how I could benefit from the experience.

“They’ve put us in prison to make us miserable,” one prisoner told me, “but let’s not give them the satisfaction.” My fellow inmates might have cried silently in private, but I never saw tears.

The people of Myanmar are fatalistic, which is not to say we submit meekly to our fate. Rather, we retain a Buddhist sense of calm in the face of calamity and live without hatred, our heads sometimes bloodied but otherwise unbowed. Resilience is a trait much admired in this country, as is a wicked sense of humor. I found out that the combo is unbeatable for survival. Still, sudden incarceration is one hell of a calamity. How did we deal with it?

Most of all, we shared food. I was not allowed family visits but could receive a food parcel every Monday from relatives. A typical parcel might contain cakes, cookies, candies, instant coffee, instant noodles, dried prawn relish, fried Chinese sausages, dried salted fish, fried chicken, or fried beef. It delivered a cholesterol and sodium overload, but the food had to last without refrigeration. After our release, none of us could tolerate such sweet, salty treats for at least the next decade.

Those parcels brought a merciful respite from the standard prison fare. Not long after sunrise, the prison kitchens sent hot rice gruel in large tin canisters to be distributed to some political prisoners and to elderly women, nursing mothers, and the small children who had entered the prison with their mothers because there was no one to look after them on the outside.

At ten in the morning, all prisoners received rice that was rough but edible and chickpea soup with a relish of salty fish paste, black as tar. If I allowed the chickpeas to settle, the clear broth was delicious. None of us touched the relish. Dinner arrived at around five in the afternoon and consisted of rice and vegetable soup, again with that evil-looking relish. Once a week every prisoner got a chunk of boiled meat, a small fried fish, or a hard-boiled egg.

Any side dishes had to come from our own parcels. I relished the coffee and the fermented Chinese tofu more than anything else. The poorest prisoners, whose families didn’t have the means to send parcels, often earned extra food by doing other prisoners’ laundry. The poorer convicts managed to look after one another with great efficiency, working to feed those too weak or ill to eat on their own. Women who were unable to nurse their babies found no shortage of willing wet nurses, many of them mothers who missed their own children.

The numbing rountines of prison life took place amid primitive, if endurable, surroundings. (Contrary to popular belief, I witnessed no rape or torture, although punishment for breaking rules could be harsh. Torture could, however, be part of the interrogation process.) The bed I rose from each morning when reveille sounded at five was made up of a four-inch-high wood platform, a “mattress” composed of my five sarongs stacked one atop the other, a “pillow” fashioned from my own wool jacket wrapped in a towel, and a -prison-issue blanket. After the morning head count came the first of our twice-daily baths, taken by means of two shared glazed-ware jars in the courtyard. In my cell I had a pot of water for drinking and brushing my teeth.

All prisoners in Myanmar are technically sentenced to “hard labor”, and the lowest-class street criminals served their sentences fully, cleaning out other prisoners’ refuse basins. Political prisoners, however, were not required to work, so I smuggled in thread and a tatting bobbin to keep my hands occupied, making yards of lace. Oh, how I came to hate lace! My cell had a window screened with wire and wood bars. I would stand before it for hours, staring at the morning flights of paddy birds or at the stars in the velvet sky or, sometimes, at a clump of weeds growing out of a nearby wall; at dusk, the tiny leaves turned translucent in the red-gold rays of the sun. That clump was the most beautiful growing thing I’d ever seen.

At Insein I met people from segments of society I would likely never have encountered on the outside. The prostitutes tended to be either neat and courteous or scruffy and loud. Murderers usually expressed horror and shame at what they had done, for the killings were usually committed out of fury or during a robbery gone wrong. But if you’d stabbed a philandering husband, you couldn’t have been more popular among the other women prisoners. Drug dealers were almost universally detested and ostracized. Pickpockets invariably refused to teach anyone their wily tricks, though I did meet one, a friendly soul named Ma Pyu Win, who assured all us political prisoners that she would not touch our purses should we meet one day in the future on a crowded bus.

Interaction with my fellow prisoners was what got me through my toughest moments. A daily hardship for me was to wake up each morning in my nine-by-seven-foot cell and see the same old walls after having dreamt vividly during the night of living free in the world. My heart would sink, but it would be lifted just as quickly by my friends in the adjoining cells.

We shared our frustrations, jokes, songs (a good singer in prison is a blessing straight from God), and, always, stories, because no books or letters were permitted to any prisoner at that time (a rule that has since changed). Of Mice and Men left us stifling sobs, Dracula gave us the shivers, and Gone with the Wind took three days to tell. What we dreamed about the most, however, was food. We would spend the empty hours describing to one another the dishes we longed for.

“Check the duck to see if it’s tender,” I’d call out to my friend Swe in cell four. “And add a bit more water if you want.”

Or, May from cell six would say, “Myint, don’t forget to add shrimp at the last minute to the soup pot,” and Myint from cell three would reply that the curry tasted lovely and her coconut rice was almost ready. As we sipped the bland dinner soup of greens boiled to a mush we might remark, “Isn’t the salad great? Have you ever tasted such fresh lettuce?” If we concentrated hard enough we could almost taste our invisible dishes.

Soon, agonized yells would emanate from the other cells: “You’re all crazy! Please shut up! You’re making us so hungry!”

“Have some roast duck,” I would reply, undaunted.

We missed noodle dishes terribly; in Yangon good noodles could be had at every street corner or marketplace at any time of night or day. We daydreamed of mohinga, a dish from the south of Myanmar made of rice noodles in thick, pungent fish broth. We imagined the spicy noodles-so hot with pepper, galangal, and dry and fresh chiles that they are called “burn the tongue noodles”-made by the Rakhine people of the country’s western coast. We longed for the delicate ones, laced with fragrant herbs, made by the Shan of the eastern plateau, and those made with piquant fermented bamboo shoots by the Kachin of the northern mountains.

We also deeply missed fresh vegetables. We were delighted when officers decided to plant long beans on rows of bamboo stands in the prison yard. The vines were thick with blue blossoms; they attracted butterflies, which rushed frantically from one flower to another.

Many of us took our daily walk in that small patch of heaven, illicitly snapping off and eating a few of the beans before they had grown to a substantial size. I have never tasted beans so tender and sweet. As we nibbled, I would tell my friends of a wonderful recipe for a salad of long beans, leading them through it to create yet another virtual meal.

Our imaginary feasts ended every night at nine, when taps was quietly played and all talking had to cease. We would settle into our beds, lying awake as we allowed ourselves for the first time that day to think of our children, husbands, parents, lovers, and friends. Eventually we would slip into sleep, heartened by the knowledge that, come morning, we would plan our next meal.

MA THANEGI, has written six books, including An Introduction to Myanmar Cuisine (Asia Publishing House, 2004). She lives in Yangon, Myanmar.