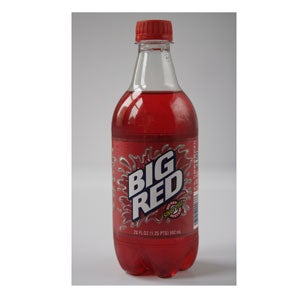 On June 19, 1865, word finally reached Galveston, Texas: “All slaves are free.” The historic news came more than two years after the signing of the Emancipation Proclamation and two months after the Civil War’s end, so Texas’s slaves were the last in the nation to be freed. Regardless, the reaction was joyful, and the emancipated slaves rushed to enjoy privileges long withheld from them. They married legally, they changed their names, they donned fancy dresses and suits—and they were finally able to purchase red soda water, an expensive novelty they had previously been barred from buying.

Ever since, the anniversary has been marked as “Juneteenth”, and drinking red soda is just as much a traditional way to celebrate the holiday as picnicking and barbecuing. The strawberry-flavored soda pops favored in the 19th century have largely given way to Big Red, a Texas cult object whose flavor is difficult to define. It has hints of cream soda, Cherry Icee, and bubble gum, but, most important, it contains a whole lot of Red 40.

A Waco company called Perfection Barber and Beauty Supply concocted Big Red, with its unique taste, in 1937, initially naming the drink Sun Tang Red Cream Soda. Its name was shortened to Big Red in the 1950s, and its popularity grew steadily in Texas and spread across the South. In the past decade, Big Red has become widely available in other parts of the country, to the delight of far-flung homesick Texans and Juneteenth revelers everywhere.

Red soda is not a part of every single Juneteenth celebration, though, and its consumption is not without some degree of controversy, either. Sheri Bailey, organizer of the Hampton Roads Juneteenth Festival, in Virginia, says, “Ironically, that red soda, which is full of sugar and dyes but not a hint of nutrition, is on the chopping block as we kick off this year’s outdoor festival.”

Red soda, and even Juneteenth itself, was for a time abandoned by much of the generation fighting for civil rights and integration. Since the recognition of Juneteenth as a Texas state holiday in 1980, however, many have reembraced the celebration and the drink. Reverend Ronald Myers, chairman of the National Juneteenth Observance Foundation, tends to focus on the practical political importance of the holiday but also values the historical significance of the drink.

“America needs healing from the legacy of slavery, and Juneteenth provides a positive and constructive vehicle to do that,” he says. “I’m not ashamed of slavery; I’m proud of what my people overcame. If you want to celebrate with watermelon and red soda water, knock yourself out. It doesn’t bother me. Put it with some barbecue and potato salad, and I’m ready to go!”

This year, Big Red and other brands of red soda will be on offer at festive events across the country. Joe Kings, a “Tex-pat” who holds a barbecue for some 800 people each year in Portland, Maine, is hoping that his son will be able to drive several cases of Big Red up from Texas in his truck. Kings remembers, “One time in Texas, an 82-year-old man was sitting there in his coveralls and said, ‘Now, this is what it’s all about: being able to have some red soda water and reflect on how far we’ve come,’ and it made his day. People were getting along; the music was going; people were mixing and mingling.”

Now that Barack Obama, an active Juneteenth supporter himself, is in the White House, celebrations are likely to have an especially poignant and joyful character this year. So, on June 19, join in your local Juneteenth festivities and cool off like a true Texan—with cupfuls of bright red soda.