The Seven Wonders of Oaxaca 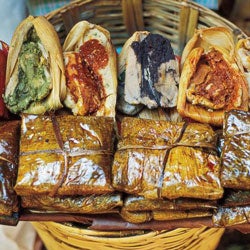 There is much to do in Oaxaca, and much to taste. This handsome high-altitude colonial city in the highlands of southcentral Mexico, about 400 miles east of Acapulco and 320 miles south of Mexico City, is the capital of an ancient region, where the rich traditions of the Zapotecs and Mixtecs are jumbled up with the European legacy of the Spanish conquistadors. Archaeological remains, dating back hundreds of years before Christ, ring the city; the famous Zapotec tombs at Monte Alban are six miles to the northwest.

The city itself is built around a particularly graceful main plaza or zocalo, where Oaxacans start the day over morning coffee and the crusty oval rolls called bolillos in one of the cafes beneath the porticoes and stately laurel trees that line the square. Two dozen churches serve the spiritual needs of the community, and incidentally offer visitors a crash course in both local and colonial architectural styles and art. There are museums of pre-Columbian and modern Mexican art. The town’s premier hotel, El Presidente, is a converted 400-year-old convent, its walls decorated with antique frescoes, its gardens lush with palm trees, bougainvillea, and hibiscus. Italo Calvino describes the hotel evocatively in his sensuous, food-filled story, “Under the Jaguar Sun.”

Oaxaca is a city, then, to discover, a city to explore and learn. It is a city in which to walk and look and feel—until the cobblestones make your feet ache and the buzz of life around you makes you long for company and you succumb to the aromas of Oaxaca’s seductive and sophisticated cooking.

You will not find burritos in Oaxaca, of course. You are unlikely to encounter taco/rice/beans combination platters smothered by a sludge of melted yellow cheese. You will find instead a highly developed and complex cuisine. You will find spice and aromatics and the flavors of the earth. Most of all, you will find mole, the defining glory of the Oaxacan kitchen.

Mole is not, contrary to popular opinion, “chicken in chocolate sauce.” Chicken is indeed a favored medium for mole, and chocolate sometimes does figures in the sauce (but not always). But moles may also include such indigenous products as tomatoes, tomatillos, chiles, squash seeds, and many different kinds of herbs, spices, and fruits—as well as such post-Columbian additions as bread, almonds, sesame seeds, raisins, and garlic. The word mole stems from the Nahuatl word molli, meaning “mixture.” It describes a whole genre of sauces; there are said to be seven classic moles, and indeed most of the variations one finds in Oaxaca itself can be made to fit into one of these categories. But the further the diner strays into the Oaxacan countryside, the more versions he will be served.

A good place to begin one’s acquaintance with mole is in one of the bustling farmers’ markets around the city, where you can taste first-rate examples of the thing at one of the little comedores, or temporary cafes, set up for shoppers and vendors. Show up early, by say 7 a.m., and try a mole negro (black mole) made with nuts, chiles, assorted herbs and spices, pureed banana, and cinnamon-flavored chocolate, poured over a quarter of a chicken, and you’ll have the energy to browse for hours. Then, for a vivid introduction to the vocabulary of Oaxacan cooking, spend the rest of the morning wandering through the market aisles, as we did on our visit to the city.

Oaxacan markets seem to have changed little over the ages. Merchants display their wares on rugs or straw mats on the ground. The heady variety of products sold seems almost timeless, even if some of them were unknown here centuries ago. The marketgoer is deliciously assaulted by the sights and smells—steaming stacks of fragrant, freshly made tortillas; braids of garlic and bundles of onions; sprays of tuberoses; heaps of dried spices and herbs; and pyramids of fresh bright chiles, their pungency strong enough to induce the unwary passerby to cough. Elegant handwoven baskets are stacked next to wonderfully garish modern plastic and tin cooking utensils. There are live turkeys with their talons bound, hanging Francis Bacon carcasses of small animals, platters of fried grasshoppers dusted with dried red chiles, smoked worms (a local delicacy) threaded on strings, bouquets of loud yellow squash blossoms, baskets of baby avocados (called the “butter of the poor”), ears of corn stacked in their sheaves, reams of glistening banana leaves (for wrapping tamales), bowls of lovely crumbly fresh cheeses.

Special mole booths in the market sell packaged versions of the most popular versions of the sauce—mole negro and mole rojo or colorado (red mole, in fact a dense reddish-brown, flavored with chiles, tomatoes, sesame seeds, allspice, cloves, cinnamon, and a bit of chocolate—among other things). Elsewhere in the market, one can find all the ingredients necessary for the other traditional moles—guajillo chiles, yerba santa leaves, and masa harina for mole amarillo (yellow mole); pumpkin seeds, epazote, yerba santa, parsley, tomatillos, and green chiles for mole verde (green mole); charred dried chiles and avocado leaves for mole chichilo (from chichiltic, which means “a red thing” in Nahuatl); guajillo and chipotle chiles, sesame seeds, and raisins for mole coloradito (“little red” mole, reddish-orange in color); and tomatoes, onion, pureed banana, vanilla, cinnamon, and ancho for manchamantel (“tablecloth stainer” mole).

After a morning in the market, we set off on a midday side trip to Teotitlan del Valle, about 15 miles northwest of Oaxaca. This is one of Mexico’s most famous weaving villages, and is the oldest town in the Valle de Oaxaca. Our destination was a well-known, lunch-only restaurant called Tlamanalli de Abigail Mendoza Ruiz (Tlamanalli is the Zapotec god of food). In this gleamingly simple establishment, we started with complimentary local mescal served in tiny, glazed-green ceramic cups with guacamole and a bowl of chile-flavored toasted pumpkin seeds. Next was a surprisingly delicate soup made with squash blossoms and purslane, and thickened with masa harina. This came with small fried tacos filled with more blossoms and queso fresco (which tastes rather like feta but is peeled off its rounds in strips like string cheese)—a sublime refinement of the quesadilla.

Then came the moles: One was a kind of mole colorado—sharp, savory, robust, brick-red, not at all sweet—served over a crisp skinless chicken breast with black beans on the side. The other—served also with a chicken breast but white beans—was a very smooth, understated cream-colored sauce flavored with pumpkin seeds and various herbs, among them avocado leaves, which lent a faint flavor of fennel or anise. (The leaves of the avocado varieties most commonly grown in the U.S. are considered poisonous, but these smaller leaves apparently have no toxic effect.) Both were memorably complex and subtly delicious—and both were “homemade” (despite being served in a restaurant), since they were prepared in the traditional at-home way. Virtually all the ingredients were diligently ground and amalgamated by hand on a metate, or flat lava stone, and a stone mano, similar to a rolling pin.

After lunch we went across the street to meet a celebrated local weaver named Zoyla Mendoza—who also happens to be an accomplished cook. As she showed us her rugs, their designs inspired by Aztec and Navajo symbols as well as the paintings of Picasso and Miro, we talked about Oaxacan food. Then she invited us into her garden to help make the chocolate for mole from scratch.

Turkeys, chickens, and guinea hens pecked the yard nearby, amid sunset-orange poinciana trees and pink bougainvillea blossoms. Several of Zoyla’s friends—small, dignified Zapotec women, their hair braided with multicolored silk ribbons—had built a fire on the ground. Over it was set a comal—a flat, round, unglazed clay dish used to roast everything from beans to grains to chiles to tortillas. Onto the comal went heaps of cocoa beans, which one of the women patiently pushed back and forth with a corn-husk spatula, until they became chalky black. When they had cooled, we all pitched in to shell them. Bits of yard-long cinnamon sticks were broken off and mixed with the shelled beans. Then, a tiny bucket filled with hot embers was placed under the metate. Onto the metate went the mixed cocoa beans and cinnamon, and for an hour and a half, we took turns slowly grinding them with a mano into a molten mass on the heated stone. The last step was mixing in sugar. All this time and effort, mind you, was simply to produce one ingredient in a complex sauce.

The next step would be to roast or fry sesame seeds, peanuts, almonds, more cinnamon, tortillas, dried bread, cloves, allspice, thyme, oregano, and dried fruit—along with a variety of chiles and their seeds. According to chef Reed Hearon, the secret to the black color of the mole negro is not in the chocolate, but in the painstaking charring of the stems and seeds of the chiles. These charred bits are then put in a sieve and rinsed in water to remove any bitterness. The skins are soaked in water. Finally the chiles are mixed into a paste along with the rest of the ingredients and fried in lard or corn oil, and the sauce is ready. It can be served with meats or fowl, as a stew, with rice, or as a sauce with chicken or cheese enchiladas.

Not all Oaxacans, it must be said, grind and roast and fry all the ingredients for their moles. Some cooks blend various elements of the sauce at home and then send the mixture to a mill to be ground professionally. Others use an electric blender, with no apologies. And then, of course, there are those prepared pastes in the market—which many local cooks consider to be as good as homemade.

Abigail Mendoza Ruiz serves a textbook-perfect mole negro, which is made from scratch, at her restaurant—a dish as good as it could be, deep in flavor, rich, a bit sweet, with a beautiful dark color and a healthy sheen. The intensity of this sauce plays exquisitely against the relative blandness of the chicken and the rice with peas and carrots with which it is garnished.

Zoyla, on the other hand, served us not mole negro but a rarer treat—her own extraordinary tamales. These were almost crepes, made of very thin masa dough, filled with poached chicken, bathed with mole amarillo, then wrapped in corn leaves—not husks, but the actual leaves of the plant—and poached for no more than five minutes. The result was both delicate in flavor and beautiful to behold.

Back in Oaxaca, we dined one evening at a top local restaurant called El Topil, presided over by chef Soledad Diaz, a tiny but dynamic woman who worked with Reed Hearon at Cafe Marimba in San Francisco during its opening, teaching her techniques to Hearon’s American chefs. Here we encountered mole amarillo in another form—as an almost soupy sauce for beef, potatoes, and green beans. The beef had been slow-cooked separately so that it was almost falling apart, then added, along with the just-cooked vegetables, only a few minutes before serving.

Again, the contrast between rich, spicy sauce and the comparatively bland ingredients was most attractive—and it occurred to me that it is perhaps this very contrast that best defines the pleasures of Oaxacan cooking. While some cuisines might skillfully blend ingredients into a seamless whole, this idiom values the drama of counterpoint. Its celebrated sauces are as complex, and as subtle, as anything in classical French cuisine—but it is their guileless pairing with simple main ingredients that turns them great.