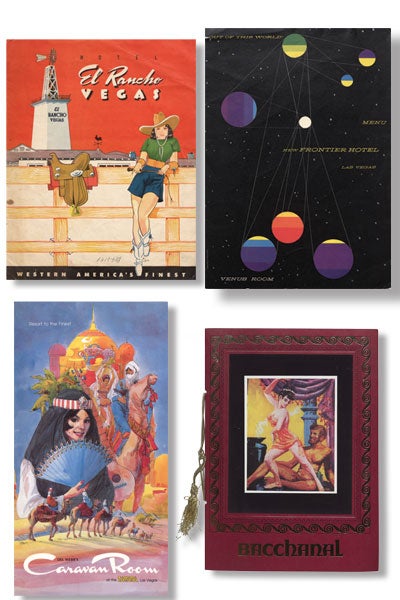 A trove of vintage menus at the University of Nevada, Las Vegas, showcases the aspirations and appetites of a city that has been feeding fantasies for seven decades. A cow-girl poses in front of the iconic windmill of El Rancho Vegas (top left), the Strip’s first casino hotel, on a circa 1943 menu. Though it harkened back to Vegas’s cow-town past, El Rancho was forward-thinking: Its “buckaroo buffets” set the stage for all-you-can-eat spreads to come, and its Round-Up Room pioneered Vegas dinner theater. By 1955, the Cold War was encroaching, and the nuclear arms and space race had become part of the city’s idea of fun. Hotels threw viewing parties for atom bomb detonations at the Nevada Test Site, located 65 miles from the Strip, while the menu for the Venus Room (top right) in the New Frontier Hotel evoked the dream of interplanetary travel. Bacchanal (bottom right) at Caesars Palace, erected in 1966, cloaked Swinging Sixties hedonism in Roman garb. The belly dancer, camels, and casbah on the cover of a 1981 menu from the Sahara Hotel’s Caravan Room (bottom left) belie the coffee-shop offerings within: “home style chili goodies” and—a true sign of the times—dishes from the Scarsdale Diet.