Welcome One, Welcome All 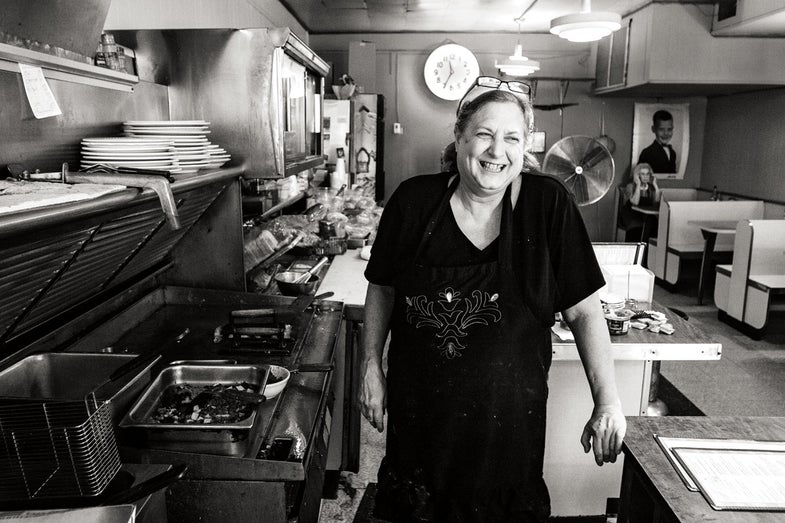 On a recent afternoon, Joe Tucker, a spirited man of Appalachian descent, stood behind the counter of Tucker’s Restaurant in Cincinnati, a worn Bengals cap squeezed over his gray hair. He was working a flattop grill crammed with sizzling beef patties, eggs over easy, and thick slices of the beloved pinhead oat and sausage loaf known as goetta.

“This one’s for John, this one’s for Kenny, and this one’s for Mikey, okay?” he instructed a young waiter, then slid a plate of shrimp and grits, a steaming bowl of chili, and his famous double-decker Big Tucker burger across the Formica countertop. Alongside Joe, his wife, Carla, a tall, tough, sweetheart of a woman, prepped the ripe fruit, crisp greens, and garden’s worth of herbs that help elevate Joe’s dishes far beyond the standard greasy-spoon fare. She turned around, locking her eyes on a young Asian-American customer seated at a swiveling stool.

“What the hell happened to your face?” she asked. The kid looked up from his coffee, revealing cheekbones outlined in black and blue.

“I got hit by a car on Liberty Street,” he said. “It’s the third time I’ve been hit by a car in this neighborhood.” He sighed. “I guess I just have really bad luck.”

“That’s nothing,” Carla said. “There’s a guy who comes in here who’s been hit by the Metro bus five times.”

Eavesdropping on their conversation, I thought about how Tucker’s has always catered to Cincinnatians down on their luck—from the kid with the busted-up face to the homeless patrons who come in for free coffee to the old-timers who’ve watched this once-thriving block go from working class to working poor to downright poor. For more than six decades, Tucker’s has remained here for everyone, come what may. It’s the kind of place where you might find the mayor of Cincinnati, who pops by for a bacon cheeseburger, sitting next to some corner boys, in turn sitting next to a business-suited exec on a lunch break from Procter & Gamble.

“Tried the cheesecake yet?” Joe asked me, and before I could answer, there was a slice in front of me. Made by an octogenarian customer named Bernice, it was decadent, creamy, and, well, perfect. Washing it down with black coffee, I looked toward the back where the restaurant’s 92-year-old matriarch, Maynie Tucker, sat peeling russet potatoes, occasionally lowering her eyeglasses to stare piercingly at Joe, Carla, and the waiters. A sign behind the counter read, “If we ain’t working hard, go tell Mama.”

It was a January morning 12 years ago when my friend Jen suggested we go to Tucker’s for breakfast. I knew of it, sure. I’d driven by the clapboard storefront practically every day in the early ’90s as I made my way, bleary-eyed, to my opening shift at the downtown Starbucks where I spent too many post-college years.

In the old German enclave of Over-the-Rhine, Tucker’s occupied a forgotten strip of decrepit Italianate buildings that seemed as if they were dying alone. Growing up in the Cincinnati suburbs in the 1980s, I knew this part of town only from the evening news, when anxious-looking reporters stood before yellow police tape, detailing the latest shooting. Now, as Jen parked her Toyota, I practically ran for cover to the restaurant’s front door. What I saw once inside would change my perceptions of Over-the-Rhine forever. There were old folks, gay folks, black folks, and white folks—even a monk from the church down the street—all eating and talking with one another.

I had spent a lot of time fending off worries that my hometown was close-minded (we tossed out Robert Mapplethorpe on his ass, we let the KKK put crosses on our square); here was Cincinnati as I wanted it to be, a city where everyone got along.

And then there was that spectacular sandwich. The juiciness sealed within the golden brown exterior of an Amish chicken breast, the richness of melted Swiss cheese, the earthiness of the mushrooms—it was the best chicken sandwich ever. The home fries deluxe, buried beneath meaty portobello mushrooms, sweet peppers, ripe tomatoes, and fresh basil, presented the perfect compromise between breakfast staple and summer salad. The berries on the side were so sweet that I asked for seconds.

“They get their ingredients from Findlay Market,” Jen told me as she scarfed down Carla’s special Mayan Bake, polenta layered with beans and vegetables with a smoky chipotle sauce. She was referring to the century-and-a-half-old public market a few blocks away. But while that explained why everything tasted fresh, it didn’t account for why Joe and Carla Tucker had bothered to elevate a menu of short-order standbys to such heights. And it didn’t explain how this white Appalachian family had remained on this almost exclusively black block since the 1950s. How, I thought, could this place exist?

The answer to that question takes us back to the 1940s, when Over-the-Rhine was still bustling with factories making everything from soap to potato chips. That’s when Joe’s father, Escom Garth, or E.G., and his wife, Maynie, arrived from Somerset, Kentucky, as part of a migration that took thousands to Ohio’s cities looking for factory work after the Appalachian coal mines shut down.

E.G. found work in a factory. Then he saw that a little restaurant was up for sale on 13th Street. He pleaded with Maynie to quit her job at the Baldwin piano factory, and in 1946, they founded the first iteration of Tucker’s. (The family opened others in subsequent years, but now just one original location, run by Joe and Carla, remains.) Their diner served workers and families around the clock. The dishes were hearty workingman’s fare—chicken and dumplings, chopped steak in tomato gravy—all made using the best ingredients the couple could afford.

Joe remembers his dad driving around the back lots of Findlay Market at twilight, loading up with produce bought at end-of-day discounts. After that, he’d head toward the Ohio River, where the slaughterhouses sold scraps for nearly nothing.

While E.G. and Maynie’s venture was a success, prices had to stay low for their clientele, so the couple was always struggling to make ends meet. That didn’t stop them from helping others. They gave away Thanksgiving turkeys, held fund-raisers for the uninsured, and set up tabs for customers they knew darn well could never settle them.

“My parents used to bring me here when I was a kid, just to show me that someone still cared about us,” Tucker’s customer David McDonald, who grew up in Over-the-Rhine during its darkest days, told me.

Joe, 54, had never planned on taking over. He spent his early days at the local rail yards working as a surveyor. But five years before E.G. died in 2003, Joe took the reins. It was Carla, however, who created the exceptional menu. After hearing students from the nearby School of Creative and Performing Arts clamor for vegetarian options, she started experimenting, whipping up a meatless chili, turning Joe’s simple home fries into those home fries deluxe, piling as many fresh fruits and vegetables as she could on top of these and other dishes.

Meanwhile, the block of Vine where Tucker’s current location stands was as desolate as ever. Broken bottles, discarded needles, and the occasional dead rat littered the streets. Somehow the restaurant has remained. Despite the disturbing amount of crime that takes place around it, in its entire history, Tucker’s has never experienced a robbery. When riots erupted here in 2001 over the cops’ shooting of an unarmed black man, neighbors united with Joe in front of the diner to fend off would-be looters. “No one messes with Tucker’s,” McDonald told me.

Two years ago, though, someone did. During the morning rush, a pair of men walked in and pointed their guns toward the lunch counter. Their target was a man seated at one of the stools, but they missed, spraying Carla with shotgun pellets and hitting an 18-year-old customer in the back. While Carla recovered, that customer will forever remain paralyzed from the waist down.

My eyes grew misty in my Brooklyn apartment when I read about the shooting in the Cincinnati Enquirer. I thought back to all those news reports from when I was a kid. Had I never been to Tucker’s, I wouldn’t have been surprised.

But I had grown familiar with the place, and this shooting seemed inconceivable. I was relieved when I read about the response to the crime: When Joe and Maynie reopened a few days later, they found hundreds of well-wishers, including the mayor, waiting for them. “So many people showed up that Joe had to lock the doors at 1:30 in the afternoon because he ran out of food,” Carla, who’s still a little stiff from the wounds, told me.

As I sat there at the counter eating Bernice’s cheesecake that day, I fixed my eyes on Mama as she sat peeling her potatoes. I’d been told that Mama is sweet as pie, but I’ve always been afraid to approach her. Today, though, I gave it a try. “Sorry. I’m too busy to talk right now,” she said in her syrupy Kentucky drawl. “Come back when I’m done.”

When I did, she told me about how she worked as a riveter “just like Rosie” during the war, how E.G. was on a date with her cousin when she first met him, but after tasting the cookies she’d baked he switched his allegiance. There was an awkward silence when she decided she’d told me all she cared to. “You ready to go home now, Mama?” Carla’s sister, Michelle, asked her. “Well, I suppose I am,” Mama said, easing herself up. As she exited, Maynie Tucker offered me this: “There’s an old song I used to love when I was younger: ‘Oh, I don’t know where you came from, ’cause I don’t know where you been. But it really doesn’t matter, grab a chair and fill your platter—and dig, dig, dig right in.”