The Guide: Where to Eat and Stay in Maui

Over a dozen things to eat and see in Maui, from globally-influenced dining at Amasia to a hundred-year-old bakery and off-the-tourist-beat ramen. 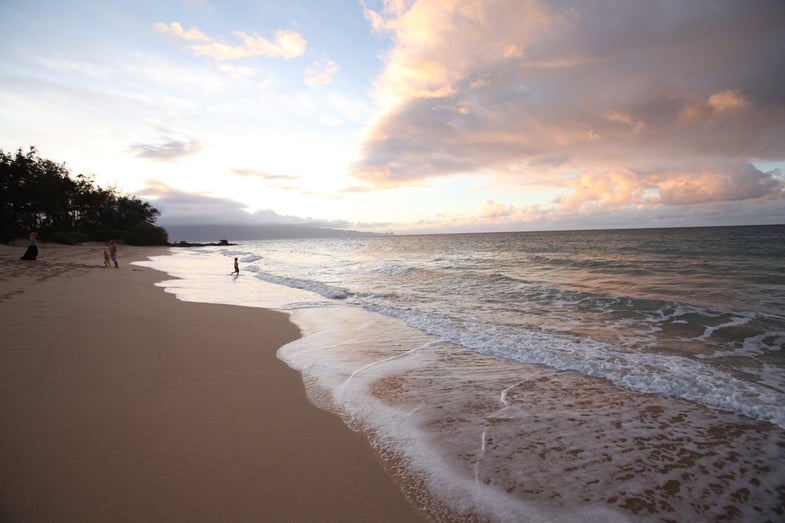 Maui, the second largest of the Hawaiian Islands, hasn’t been nicknamed “the Magic Isle” for nothing. First, there is its surreal chromaticism: Avocado green valleys; ultramarine blue seas; amber poha berries, ruby red ahi tuna; vivid, rainbow-hued shave ice; and all those spell-inducing sunsets. The food is equally colorful. Hawaiian cuisine is an amalgam of the traditions of its Japanese, Filipino, Korean, Chinese, and Portuguese immigrants. It is a cuisine in constant evolution, and one that embraces both beloved snacks like spam musubi—a slice of spam on top of a block of sushi rice, all wrapped with nori—and refined farm-to-table dining that makes use of the riot of wonderful ingredients native to the island. The options, like Maui’s charms, are plenty. —Maria del Carmen Pottage

Set in Kapalua, one of the most beautiful bays on Maui, Merriman’s has a stellar location with some of the best views on the island. Owned by chef Peter Merriman, the restaurant is known for its commitment to local, sustainable ingredients. Salads such as the “poke-cut ahi and avocado”—with butter lettuce, mango, beets roasted in Hawaiian sea salt and olive oil, tomato and tamari-ginger vinaigrette—taste so fresh and vibrant, it is evident ingredients didn’t travel long to get on the plate. Kurobuta pork raised in Upcountry Maui at famed Malama Farm is used from snout to tail in various dishes, like the Kalua pig and sweet onion quesadilla served with kimchee and mango-chili sauce.
Merriman’s
Bay Club Pl
Lahaina, Maui, HI 96761
808/669-6400

4. Amasia at the Grand Wailea Resort

Alan Wong’s first restaurant off Oahu is named for the theoretical supercontinent that would be formed by the natural merging of Asia and North America. The name suits the food, which is global and surprising: Sweet potatoes are cooked on a Japanese robata grill and served with coconut-ginger cream; buttery Hawaiian Kampachi—sustainably offshore farmed Almaco Jack fish—is served raw in a Peruvian-style tiradito (thin sashimi-like-cut fish served with a bright, citrusy sauce spiced with Peruvian chili peppers); and a whole tomato is combined with a li hing mui (salted dried plum) dressing in a sweet and tangy salad. Desserts are also playful and technique-driven, as in The Coconut, a coconut pudding sorbet covered in a chocolate shell and shaped into half a coconut.
Amasia
3850 Wailea Alanui Dr
Kihei, Maui, HI 96753
808/891-3954

In the cowboy town of Makawao, in upcountry Maui, this nearly century-old general store-slash-bakery is beloved for its glazed doughnuts on a stick and cinnamon-sugar dusted malasadas.
T. Komoda Store & Bakery
3674 Baldwin Ave
Makawao, Maui, HI 96768
808/572-7261

In a no-frills space set in a spectacular location, The Gazebo serves generous breakfasts featuring dishes like macadamia nut pancakes and Portuguese sausage fried rice. There is always a line to get in, but the wait is made bearable by a view of Napili Bay where, depending on the season, you can spot humpback whales or sea turtles.
The Gazebo
5315 Lower Honoapiilani Rd
Napili Shores
Lahaina, Maui, HI 96761
808/669-5621

In a small strip mall in Honokowai, this counter-service-only eatery serves some of the best lunch plates for take-out, perfect for eating in the park across the street. Lunch plates were created during Hawaii’s sugarcane plantation era, when immigrant farm workers shared their homemade lunchbox meals at work, mixing the culinary traditions from their diverse homelands. Try the chicken katsu (chicken fillet breaded with panko breadcrumbs and fried) and the grilled mahi mahi in a lemon caper sauce, both served with white rice, and a side of steamed vegetables or macaroni salad.
Honokowai Ozakuya & Deli
3600 Lower Honoapiilani Road
Lahaina, Maui, HI 96761
808/665-0512

Sam Sato’s is way off the tourist path, with no ocean views or flashy umbrella drinks, whose “dry mein” have made it into a Maui institution. This ramen-like dish is served with a side of pork-and-beef broth, to be lightly drizzled over the noodles as they are eaten, or used to dip the noodles in, just like soba. The thick, somewhat chewy egg noodles are made in the Iwamoto Natto Noodle Factory in nearby Paia. For dessert, try Sam’s manju, a baked pastry filled with azuki or sweetened lima beans.
Sam Sato’s
1750 Wili Pa Loop
Wailuku, HI 96793
808/244-7124

For those who want to be pampered the Four Seasons Wailea, on the southwest coast of the island, is the zenith of comfort. Resort guests can launch their day, just as earlier Hawaiians did, paddling into the Pacific Ocean in a 6-person outrigger canoe, followed by a breakfast buffet stocked with a wide variety of items ranging from miso soup to steak specials, and incredibly fresh juices made from local tropical fruits.
Four Seasons Wailea
3900 Wailea Alanui Drive
Wailea, Maui, HI 96753
808/874-8000

Maria del Carmen Pottage lived on Maui for four years before moving to New York City to pursue her writing career. She still misses mango season and picking up guavas on her hikes.