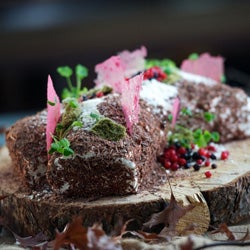 Not too long ago, the SAVEUR test kitchen was taken over by a full video crew for the shooting of our newest video show, a co-production with YouTube’s HUNGRY channel: Dueling Dishes, the kind of culinary cooking show that we’ve always wanted to watch. In each episode, two seriously talented professional cooks face off with the same instructions: make the same dish, and make it really good. Despite their shared inspiration, the resulting plates of food are wildly, creatively different from one another—and as the chefs share their secrets and techniques, they’re inspiring us in our home kitchens, as well.

In the second installment of the series, Emma Bengtsson of Aquavit pits her Swedish-inspired yule log against a traditional buche de Noel with an American twist by Marc Aumont of The Modern. Whose buche de Noel will take the cake? There’s just one way to find out: watch the episode below.

Dueling Dishes Episode 1: Latkes »
In the first episode, Eli Sussman of Mile End Deli goes up against Quality Meats chef Craig Koketsu in a Hanukkah-themed battle of the latkes.

Want to make your own buche de noel? Check out our step-by-step gallery, or watch our video on how to decorate a buche de noel »