Outrageous breads, Tasmanian oysters, and Arroz con Pollo are just some of our favorite foods from this year. 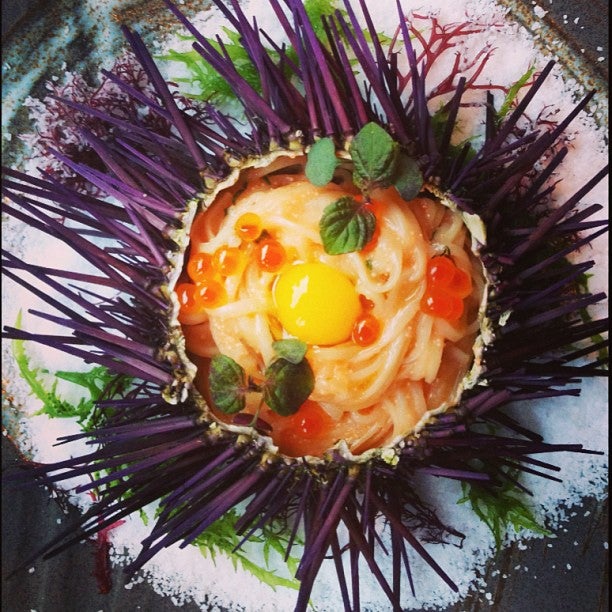 I’ve had the delicious opportunity to dine at ABC Kitchen’s sister restaurant,** ABC Cocina**, more than a handful of times since it opened this May. Sprinkled with crisp chicken skin cracklings, the arroz con pollo has become one of my favorite dishes. —Kellie Evans, Associate Food Editor

The rib platter at Walls’ Barbecue in Savannah, GA, with one side each of smoky collared greens and sweet potato casserole (and a sweet tea on the side). The place is down a back alley, teensie tiny, with Hall & Oates playing from a portable radio and orange linoleum booths. The lunch cost me $7.99 and lasted ten minutes, but I think about it daily. —Sophie Brickman, Senior Editor

It’s a tie. Up first, the Sumatran fish curry I had as part of a massive meal at Bundo Sati, an incredible restaurant in Jakarta that specializes in the cuisine of Padeng, a city in Sumatra. The crazy quilt of dishes that are brought to the table when you sit down is magnificent, but the fish curry is what made it a meal of a lifetime. The other marvelous thing I had was the tuna crudo at Piora, in New York—gorgeously prepared with with beet and black sesame, it singlehandedly freed raw tuna in my mind from the trappings of uninspired fine-dining stereotypes. —James Oseland, Editor-in-Chief

I am obsessed with** the vegetable-focused entrees at Daniel Humm’s NoMad** restaurant, like the Butternut Squash roasted with morcilla sausage, apple and quinoa. Doesn’t sound like much, but then the dish comes out: an inch-thick slice of squash, artfully smeared with a jet-black reduction flecked with sausage, quinoa sprinkled on like a garnish. And as beautiful as it is, I am still skeptical. How good could this be? One bite of sweet, savory, soft, crisp perfection and I’m in love all over again. —Felicia Campbell, Associate Editor

For visual appeal and deliciousness, the spicy pollack roe pasta**** nested in an enormous sea urchin shell, purples spines still dangerously intact, at Mizumi at the Wynn Las Vegas was the best thing I ate. That, and everything at Betony in Manhattan. —Betsy Andrews, Executive Editor

A tie, between three pieces of bread: A slice of Sub Rosa Bakery’s chewy, lightly sour classic bread in Richmond, VA; an obscenely-perfect laminated pastry that came alongside my meal at Eleven Madison Park; and a fermented potato flatbread I had at a tasting menu at Luksus (a Scandinavian restaurant in Brooklyn’s Greenpoint neighborhood). —Laura Sant, Assistant Digital Editor

It’s been a wonderful food year, but the thing I can’t seem to get out of my head right now is Kellie Evans’ version of pan de sal, sweet Filipino-style bread rolls as light and tender as birthday cake. While the pan de sal was still warm from the test kitchen oven, I split one open, filled it with salted butter, and dipped it a bit at a time in coffee mixed with sweetened condensed milk. —Tejal Rao, Senior Editor

The best dining experience of the past year would have to be the 8 course tasting menu I enjoyed with my sister at** Addison at the Grand Del Mar** in San Diego. I knew it would be good, but I didn’t expect to be so wowed by the food presentation, attention to pairings, and impeccable service. But the best single thing I ate all year? Tasmanian oysters purchased at the Queen Victoria market in Melbourne, dressed with lemon we bought at the citrus stand, consumed while perusing the beautiful produce. —Cory Baldwin, Associate Digital Editor

The bread-and-butter course at Luksus, a modernist restaurant hidden in the back of a beer bar in Greenpoint, Brooklyn, was pretty spectacular. Hot, crusty bread and rich, sour butter—the other eight or so courses were great, but the bread and butter was all I really needed. —Helen Rosner, Executive Digital Editor

There is no better way to cure a hangover than to fill your belly with a bit of grease; as a new resident to NYC, a ShackBurger and cheese fries from Shake Shack has been the best cure for me, even when I’m not hungover. —Farideh Sadeghin, Associate Test Kitchen Director

Maybe it was the fact that I walked into the warm second floor dining room of Marliave on a frigid afternoon in late November. Maybe it’s because there was Christmas music playing. Good Christmas music—Louis Armstrong, Sinatra, the classics. No matter the reason, chef Scott Herritt’s Sunday Gravy, a deeply flavored three-day sauce made with San Marzano tomatoes, ridiculously tender chunks of beef, lamb and pork that require no chewing at all, and perfectly executed gnocchi brought me more comfort than any comfort food I’ve had in some time. —Keith Pandolfi, Senior Editor

I’m so highly addicted to the truffle fries at Woodbines, the neighborhood pub around the corner from my apartment in L.I.C.—the thin, ultra crispy shoestrings are tossed in parmesan and fresh parsley straight from the fryer, and emit a subtle yet intoxicating truffle-y-ness—the perfect salty-funky-crunchy pairing with a cool pint of cider. —Judy Haubert, Associate Food Editor

I’m still craving the lemon verbena panna cotta with basil sorbet and honeydew melon I had at** Chikalicious** five months ago. The panna cotta’s silkiness contrasted perfectly with the freshness of the sorbet, and the melon added just the right amount of texture to this dessert. —Dominique Lemoine, Assistant Editor