My Search for Nitza 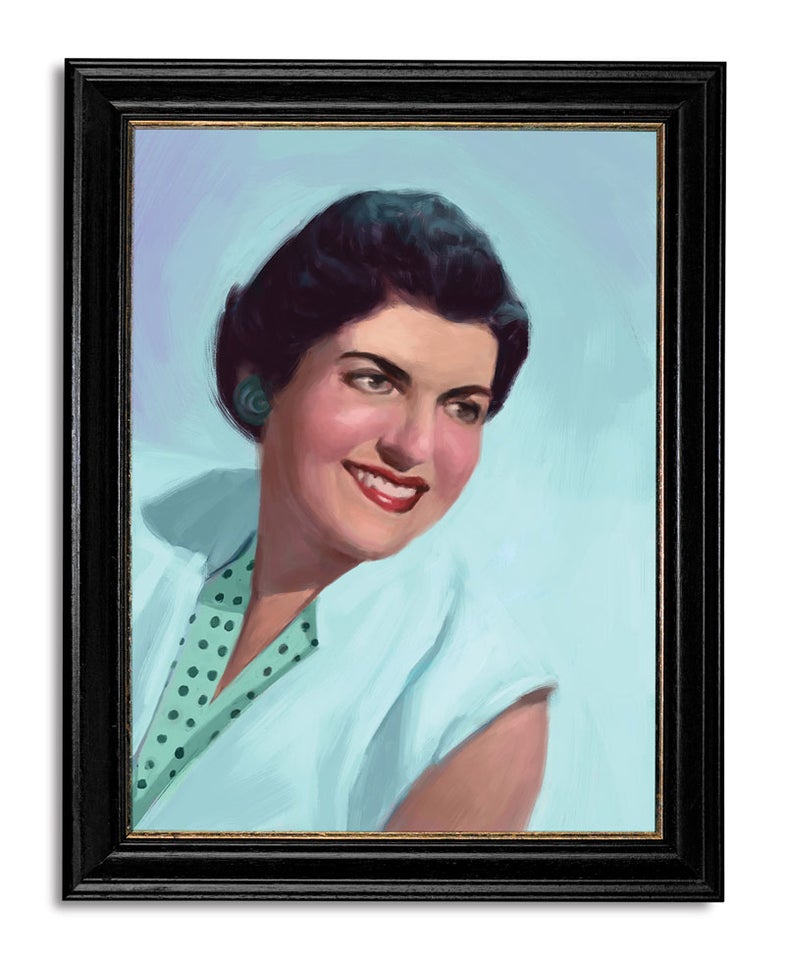 “You will need to cook for yourself now,” my mother said, standing in our yellow-tiled kitchen in 1988. I was moving away to college and she wanted to make sure I could take the Cuban dishes of my Miami childhood with me: a lavishly spiced ground beef dish called picadillo, and comforting fricassé de pollo, tender braised chicken in a tomato sauce dotted with olives, capers, and raisins. She handed me Cocina Criolla, the bible of Cuban cooking, written more than 60 years ago by Nitza Villapol, the island’s most influential culinary figure.

Nitza, as she was known, was most famous for hosting a cooking show on Cuban television called Cocina al Minuto, which launched in 1948, as many a compatriot will point out, a good 15 years before Julia Child debuted on American airwaves. She was also a radio host, a magazine columnist, and a spokeswoman for food brands, a one-woman empire who taught generations of Cubans to cook the classics. Her cookbooks had several renegade print runs in the United States. Nostalgic Cuban families who had fled the Castro regime, as my own family did in the 1960s, relied on these reprints to keep a piece of their beloved island alive and to pass on their heritage to their children. But as large as she figures in our hearts and minds, little has been written about the woman who managed to transcend time, politics, and an island, and whose influence would stretch far beyond Cuba’s shores to profoundly touch me, an American woman born to Cuban immigrants.

Along with my mother, it was Nitza who had taught me to cook and appreciate food. I’d known of her for years, but it was only after I went to culinary school and began to think more seriously about food that I set off on a journey to understand her. As I prepared her sweet flan recipe, I wondered if Nitza truly was an instrument of propaganda for the Cuban government, as some have suggested, and sought to understand her influence on millions of kitchens throughout the Cuban diaspora. This is the story of my search for those answers. My search for Nitza.

When I reached out to Marcos Lopez, a Cuba-based friend of Nitza’s who wrote a book about her life, the first thing I learned is that, like me, she was born in America, not Cuba. As a kid in the 1920s, she lived in a small apartment in New York City’s Washington Heights neighborhood, where her parents frequently welcomed fellow Cuban expats. They would drop by unannounced, and Nitza’s mother, Juana Maria, would whip up hearty Cuban meals. “Juana Maria cocina al minuto,” friends joked, impressed by her ability to feed a group in minutes. A few years later, Nitza and her family settled in Havana, the island’s cosmopolitan capital, where my family comes from. She was homeschooled after a bout with polio left her bedridden. At 19, Nitza was able to walk again and she found a job teaching Spanish at a public school, but she always aspired to more.

Through López’s account of Nitza’s life, I learned how that early hardship filled her with gumption and helped her claim a place in history: The moment she read about the launch of Cuba’s first television station in the local newspaper, she simply wrote the owner proposing he hire her to develop a cooking show. He did, and the first episode of Cocina al Minuto aired December 23, 1948. While I’ve never been able to view that original show, I’ve seen so many photos of Nitza that I can picture her on the set with her soft curls and precisely defined lips and eyebrows. I imagine she looked so glamorous making guanajo relleno, a Christmas turkey that relied on a classic Cuban marinade of garlic, citrus, oregano, and cumin. It was her mother’s recipe.

The show became one of the most successful programs in Cuban television history, and it kicked off Nitza’s career against the backdrop of a Cuba vastly different from the time-stalled island we know today. The glamorous playground for socialites and celebrities was brimming with American products back then. Poring over Nitza’s early books and articles in the stacks of the University of Miami’s Cuban Heritage Collection, I kept seeing ingredients and tools referred to by their brand names—to purée something in a blender, for instance, is osterizar, or “to Oster-ize” it—and her cookbooks were just as likely to include instructions for fancy bisques, soufflés, and aspics as for homey dishes of black beans and rice.

But in 1959, when Fidel Castro came to power, things began to change. Within six months, sweeping agrarian reform redistributed large swaths of privately held farmland, some to the peasants who tilled it but most to the government itself. Castro nationalized American sugar and rice mills and food packaging plants, and within three years 70 percent of all Cuban farmland was under the central government’s control. The few independent farmers who remained were required to sell to the state at artificially low prices. There were drastic food shortages by 1962, which led to the establishment of a food rationing system that remains in place today. By then the United States had severed diplomatic ties with the island and imposed an economic embargo that’s still in place as well.

“Certain ingredients began to disappear,” Nitza said in the 1983 documentary Con Pura Magia Satisfechos, filmed in her Havana living room when she was about 60. “Some disappeared all of a sudden, others disappeared little by little. There were very difficult moments, days when at noon I didn’t yet know what we were going to be able to cook on the show a few hours later.” For Nitza—for all Cubans trying to put food on the table—the shortages meant that homegrown staples like plantains, mangoes, and coffee, as well as basic imports like rice and oil, became scarce.

Long before I’d watched the film, I had heard about those days. My parents were still in Cuba when the shortages began, and they often told me of the night when there was a single avocado for dinner, bought on the black market, and of the days they got by on water alone. Those experiences would shape their lives in America, influencing how they raised me in a small rental apartment in a working-class neighborhood. Every night my family made a point of sitting down to a homemade dinner.

By the 1980s, Nitza was teaching Cubans how to fry eggs with no oil, make breaded steak with no eggs, and, when meat and other animal proteins all but disappeared from ration cards, cook the pith of a grapefruit as if it were a steak. When the amount of rice rationed to each family was reduced—an unthinkable loss for Cubans—Nitza taught people to make macaroni and beans instead.

“She was determined that Cubans be known not for their austerity but for their ingenuity,” said Lillian Guerra, a Cuban-American history professor I spoked to at the University of Florida. The 1991 collapse of the Soviet Union, which had propped up the Cuban economy for nearly three decades, was catastrophic. Agriculture came to a virtual halt, buying and selling meat or produce without government sanction became a serious crime, and the average Cuban citizen lost 20 pounds in the two years that followed.

It was during this time that I first traveled to Cuba to meet my extended family, a few years after I’d received that fateful cookbook from my mother, years before I would learn Nitza’s story. I traveled to the outskirts of Havana to visit my grandmother’s sister, Tia Mamita. A wisp of a woman, she hugged me tightly, her embrace erasing years and distance and even the fact that we’d never met before. The sun was unforgiving, and I remember the tall glass of cold water she offered, which I guzzled gratefully. I left my aunt’s home thinking how nice it was to meet her and how small she looked in comparison with my grandmother, who lived in the United States.

This was at the tail end of Nitza’s career. She was running out of ingredients for her show, focusing instead on fashion and gardening. It was a tragic turn for the Castro supporter who had dedicated herself to the idea that even in the most dire moments, a plate of food could preserve dignity. Her show went off the air in 1993, and the last episodes were difficult to watch. The kitchen, like Cuba itself, was neglected. Its famous host wore a sagging housedress and her eyes were filled with defeat. A few years later, at age 74, Nitza died of heart failure.

Shortly thereafter, I returned to Cuba, stopping at Tia Mamita’s home to drop off a package. “You must come in and stay for a while,” she said. I had plans that day to see friends, but she insisted. “You must come in and eat something. The last time you were here all I could offer you was a glass of water. I had nothing in my refrigerator that day, and I was terribly embarrassed.” Her eyes welled. “So when you left, I went out and bought a can of peaches.” She showed me a plain tin with no label. “I have been saving it in case you would one day return. I don’t have much in my refrigerator today, but my child, these peaches are yours.”

I thought about my friend waiting for me outside with his motorcycle still running, and I hesitated. But when I looked into my aunt’s brown eyes, I understood the sentiment: the consummate Cuban custom of bestowing generosity on a visitor, whether family, friend, or stranger, driven by the notion that hospitality is our ultimate measure of grace. It is the grace that Nitza knew to be present in a plate of food, whether made in times of ease or struggle. The same grace tucked into the pages of the precious cookbook my mother would give me just a few years later. I turned and yelled out at my friend. “Park the bike! We’re going to eat some peaches.”