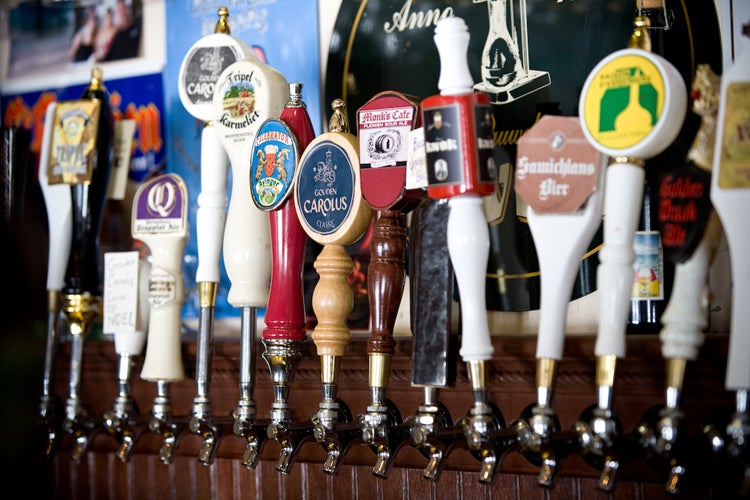 Several years ago, I started to hear rumors about some ridiculously great beer wonderland deep in Maine’s lush interior, near where Stephen King has his summer redoubt. The rumors were blessedly true. Down a dirt road, close to the middle of nowhere, lies Ebenezer’s Pub, a sylvan hideaway that’s become a necessary and delightful pilgrimage for beer lovers from all across the country, and abroad too.

This is where Jennifer and Chris Lively have been preaching the merits of advanced beer knowledge, and of Belgian beers in particular. The slightly shabby but charming farmhouse, with its cozy bar, covered porch and picnic tables, has been their pulpit. Lately, the lessons have focused on the wild-yeast Belgian “sours” that at first taste might seem a bit extreme for the average American palate, but which are now bringing thousands to the pub.

“We started with the Belgians, the dubbels and tripels, then a few years ago we decided we were going to start pushing our customers’ palates and get them expanding into the sours,” Jennifer says. Count me in. The Livelys’ teaching material begins with thirty-five dazzling taps of heavenly brew; move to hundreds of bottles in the refrigerator, and continue with hundreds of vintage beers in the climate-controlled cellar. Most (but by no means all) of the stock is Belgian, and much of it’s hard-to-find in the U.S., from strong Belgian pale ale classics such as Delirium Tremens, to exotic Italian entries such as Birrificio De Ducato’s Kiss Me Lipsia, which is sour and salty thanks to pinches of pink Himalayan salt, and close-to-home native Mainers such as Allagash Interlude (aged in red-wine barrels).

The menu really shines with the Belgian lambics, typically made from blends of open-vat vintages (sometimes from more than one year) that rely on whatever yeast floats in, and are often aged with fruit, berry and herb additives: Oud Beersel’s cherry-bottomed Oude Geuze Veille, Cantillon’s raspberry-leather Rosé De Grambinus, Vapeur’s Cochonne, spiced with roasted chicory and orange peel. And to soak it all up, there’s a solid pub menu with local ingredients and, of course, Belgian frites.

Downstairs in the cellar, there’s much more. In its climate-controlled recesses you can find a wealth of vintagable (i.e., high alcohol-content) beers: a handful of Bass’s 1902 King’s Ale, cases of Sierra Nevada’s Bigfoot Ale, stacked vertically by year, and a room in back dedicated to lambics of years past. Some of these you can try, but some of the most valuable are off-limits: Jen Lively says they are the family’s retirement plan.

Be sure to call or email ahead for a cellar tour. In the summer, Ebenezer’s grows wildly busy, especially during the six-day Belgian festival—which starts on August 21 this year—when Belgian chefs and brewer-priests are on hand, and congregants pitch tents on the property. It can be surprisingly crowded in mid-winter too: Ebenezer’s has become a way-station for thirsty snowmobilers who motor over from a local trail.

Today, Jen Lively crowds a tall bar table with samples. My favorite is one of the sour lambics, Drie Fonteinen’s “Intense Red.” It’s a kriek, or “cherry,” for the Morello cherries it’s flavored with. But you might as well translate it as “crack.” It’s delicious—very fruity, but very dry, with all sweetness squeezed out. Lively brings out a Belgian Royal Stout, Black Albert, uniquely brewed for Ebenezer’s by De Struise (tip: when a given year’s supply grows thin, it’s sometimes disguised on the menu as “Alberto Negro”). It’s darker than most stouts, but somehow smoother with a big mocha richness up-front, and a faintly fruity remainder at the end.Then, for a final wash-down, she pours De Dolle’s Bos Keun (Rabbit of the Woods), a strong but comparatively light-tasting blonde Easter beer. It smells floral and citrusy, like rosehips do, and has a bit of bitter, cleansing hoppiness to it.

Fortunately, after this afternoon’s beery bounty, I have a lighter-drinking companion, Georgia, to drive us home to Portland. I’m equally fortunate that when I don’t want to trek so far inland, I can still benefit from the Lively’s expertise: They’ve just started to brew their own Belgian-style beers in Brunswick, Maine, 20 minutes up the coast from Portland. Husband Scott Lively declares Ebenezer’s Brew Pub’s first tripel the best in the U.S. And for this amateur, his tangy, sour-style “Lemon Haze” holds up beautifully against its Belgian inspirators. I am not about to argue with the experts. I just want to learn more.