Photographer Tanveer Badal recalls munching on fresh fish and goat at the island oasis built, as a refuge, by two Italian expats 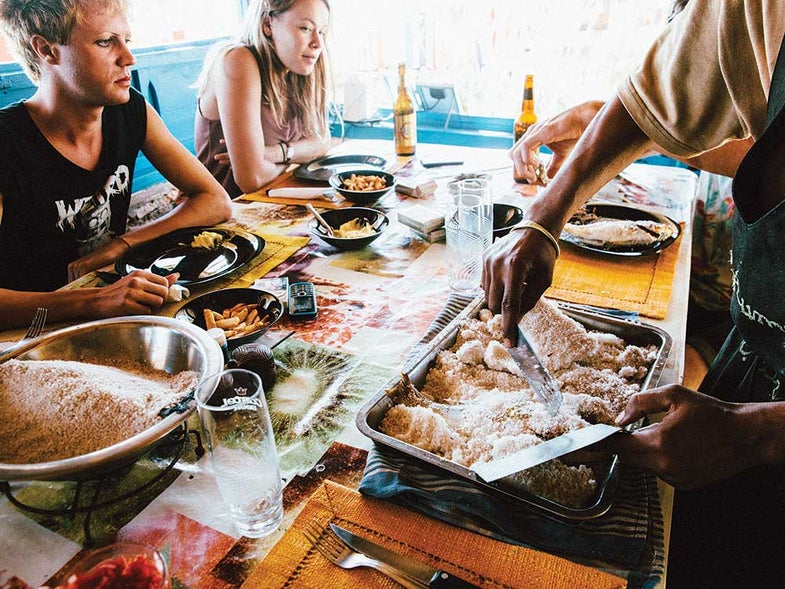 Dario and Valerio wanted to create a place of their own. Growing up in a small, conservative Italian town, the 30-something gay couple never felt they truly belonged somewhere. Until, that is, they happened upon a plot of beachfront land in faraway Anakao, on the southwest coast of Madagascar. They found the land while researching the area on Google Earth and purchased it sight unseen. They had no particular destination in mind and just wanted something far from the world they lived in. They worked hard, saved their money, and built their own “Neverland” in the form of the Auberge Peter Pan.

They have not quite given up on Italy. The couple bring back fresh pasta and their favorite olive oils from trips back home. When my wife and I found our way there as travelers, we were surprised to be served some of the best food we’d ever had. Each morning, local fishermen brought their catch to Dario and Valerio first. The pair had their pick of the freshest fish, lobsters, and baby clams before the rest were taken to the local markets to sell. We steamed the clams in garlic and ate them with toothpicks, and baked the whole fish under a blanket of sea salt. One night, Dario asked if we might be interested in a dinner of goat, baked whole underground. Soon a couple of villagers came to the hotel with machetes and a live goat tied to a string. That evening, we ate tender goat meat and fresh pasta while we watched the sunset on the Mozambique Channel.

Neverland isn’t always a paradise; the Auberge was robbed at gunpoint multiple times, and now an armed security guard stands perpetual watch. When I asked if the couple thought about returning to Italy after such episodes, Dario quickly replied: “Never. I will die here.”