What It’s Like to Break Bread in the Desert

Less than 10 percent of Jordanians still live as nomadic Bedouins. An American family learns to fire-bake shrak, their daily bread, and taste their traditions 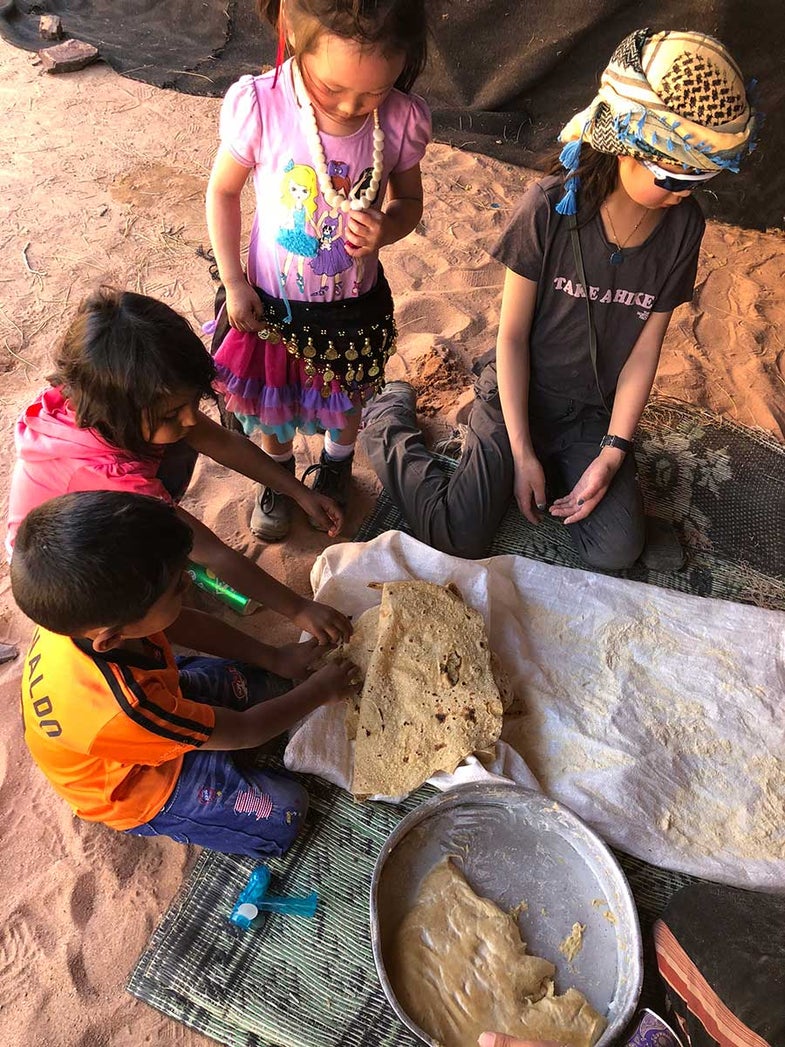 Our family braces for impact in the open rear compartment of a four by four pickup truck that has gone airborne off a sand dune. In Wadi Rum, a Unesco World Heritage Site located in southern Jordan, the sky is a perfect shade of blue punctuated with spectacular pinkish brown sandstone spires and pinnacles. The tires grip a desert floor dotted with white saxaul, small trees Jordanians call ghaḍā, the branches of which will soon infuse our clothes and food with their smoky fragrance.

With both hands on the truck’s safety rails, Kyra, 12, and Ethan, 9, stand with their feet planted apart the way ghaḍā’s roots grow to stabilize in the sand. My husband is seated on one bench, shielding Logan, 1, and Riley, 4, from the sun with the drape of his red and white-checkered hattah, while I shoot photographs from the opposite bench.

Nearly 600 million years of earth’s history is stratified in Wadi Rum’s rocks, petroglyphs, fossils, and wildlife. Here, you will also find black and white goat hair tents perched on top of mountainsides for a few months in spring or summer, evidence of less than ten percent of Jordan’s population still living as nomadic Bedouins. Most Jordanians claim a Bedouin ancestry even though they are settled into urban homes where education, electricity, health care and water are easier to access. Later that day, we will ride the camels they herd, milk their goats, and sleep under the stars, but first Ra’ed Suleiman, the head guide in Jordan for Rahhalah Explorers thought a cooking playdate would offer the kids a chance to experience Bedouin virtues like honesty, generosity and hospitality.

Abu Yousef has two wives and 13 children. Tall and thin, dressed neatly in a hand-tailored burgundy silk thawb, Yousef explained in his language a few days earlier when I visited as a media delegate of the Adventure Travel Trade Association and Jordan Tourism Board that he wants to create a special bond with people around the world. He wants you to feel that you are welcome and to enjoy his traditions and learn why he loves his simple life.

On my first day in Wadi Rum, I left my cell phone in a store. I thought for sure it was gone, but Yousef made a few calls with his cell and about an hour later, someone delivered it to his camp. I wanted my children to see Bedouin virtues like this in practice and how other kids are raised in other parts of the world. I wanted them to understand how preparing food or sharing a meal is an expression of friendship or love, so important that a family will spend beyond their means to host strangers.

Influenced by Lebanon, Syria, Palestine, and Egypt, Jordanian food—besides the usual Mediterranean mezze like hummous, baba ghanoush (called mutabbah in Jordan and made with tahini and garlic), falafel, and greens—is all about labor-intensive dishes like their national dish mansaf, a Bedouin feast in which a whole lamb is stewed then served on rice and shrak (a flatbread that evolved 200 years ago under the reign of the Ottoman Empire). Sometimes the dish is topped with the sheep’s head and the eyeballs and tongue are offered to the guest as an honor.

When we arrive at Yousef’s camp, ghaḍā is smoking from three fire pits. Yousef’s sons tend to two large ones unsheltered by the tent. The third is sectioned off beneath a lean-to tent for Yousef’s wives and daughters. Suleiman explains Bedouin etiquette, warning my husband that he is not allowed to look at Yousef’s wives and daughters or enter their side of the tent. None of us are allowed to photograph them.

Yousef’s youngest son and daughter are around the same age as Logan and Riley. They peek at us shyly, digging their bare toes into the sand. Logan and Riley break the ice by immediately taking off their shoes, grabbing their hands, and giggling. While Suleiman teaches my husband and Ethan how to marinate lamb chops, roll kafta around skewers, and how to make mutabbah, Kyra and I join Yousef’s wives, who are dressed in long black dresses called madraga. Their heads are covered by a usaba so that we can only see their eyes, which are kind-looking and bright. Since they do not speak English, they beckon for us to join them by their fire pit and learn how to make shrak.

Beside them upon a rug, there is a metal pan of the liquid dough and a white tarp with rounds of kneaded dough. We each grab one and begin to toss the dough back and forth against the palms of our hands. Stretching shrak is not as easy as it looks. Kyra and I both tear ours and are unable to form a circular sheet to brown upon the saj, an iron dome shaped like an upside-down wok, which is placed over the firepit.

When we finally sit down to eat the meal we’ve prepared, the shrak that Yousef’s wives made tastes more crunchy and chewy than the ones baked in the cities. Suleiman explains that Bedouin shrak is only “made of water, wheat, and salt. The Bedouins dilute the mixture and knead it to a diameter of about three feet so there is always enough for the whole family to eat.” Suleiman adjusts his black pinstriped fedora hat. “Your favorite food is pizza, yes?” he asks Ethan. Now, he has my son’s full attention.

“What country created pizza? It will shock you.”

“India,” Suleiman laughs. “Like shrak, pizza is also a poor man’s food. Did you know that bread is a symbol of blessing? If you don’t have bread, what happens?”

Suleiman shakes his head. “You go hungry. That’s why bread is a symbol of wealth.” He tells them about a Bedouin tradition where the liquid form of shrak plays an important role in weddings. The groom’s mom dips her hands in the dough and smears it on the front door step before the bride enters.

After we are full, Suleiman asks Ethan and Kyra to help him find a shrub called ‘ajram or jointed anabis. He shows them what part of the plant to pick and crush with a rock. He places a pinch of the pulp into their hands and adds some water. “It actually has antimicrobial properties. Camels eat it to clean out their insides.” My kids are delighted to see it foam like soap.

Their hands now clean, the four of them learn how to shear and milk a goat. Yousef’s kids discourage mine from drinking the milk fresh. They are worried the milk would upset their stomachs which have never digested anything straight and fresh from an animal. Holding the cup tightly in her hands, Kyra takes a sip anyway. She blinks a few times, each time her pupils seem to dilate as she understands something that she never understood before.