Lexie Smith speaks with Jeffrey Hamelman, Author of Bread: A Baker’s Book of Techniques and Recipes 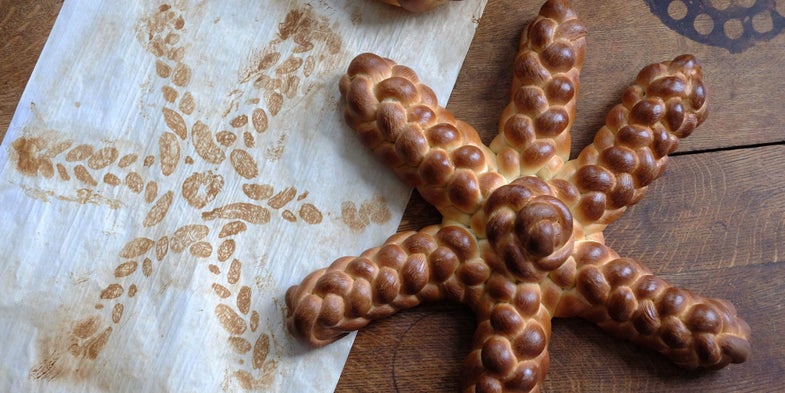 Years ago, I was working an overnight baking shift and listening to a podcast when the subject, who had recently survived a near-death experience, said, “I knew I had to do something important with my life. I couldn’t just be, like, a baker.” Of course, this unjustly diminished a vital human tradition, but I’d long had a suspicion that there was something else I should be doing besides making baguettes. This stranger’s words were both a punch in the gut and reinforcement of my misgivings. I had not yet begun to think of bread the way I do now: as a lucid marker of cultural shifts and an enduring symbol of the human experience. Throughout history, bread has been a humble translator of larger changes. Rioting ensued after bread subsidies were cut in Cairo and more recently in Syria; Portuguese rolls sold on trains through Mozambique show the remnants of imperialism; the baking powder that has replaced sourdough in remote areas of northern India whispers the effects of new trade routes and globalization. I admit, this wide-angle on bread feels very 2018, when the intersection of dialogues is practically a conversational requirement. With that in mind, I talked to Jeffrey Hamelman, a veteran baker and author of Bread: A Baker’s Book of Techniques and Recipes, the SAVEUR Cookbook Club’s focus for the past month, about his own relationship to bread and how things have changed since it began.

Challah shaped in a Winston Knot and another in a 6-pointed star shape; for more complicated braiding, Smith suggests reducing the yeast slightly to prevent over-proofing Lexie Smith

Unlike me, Hamelman has had no doubts about his craft. “I started at 6 A.M., Wednesday morning, September 1, 1976. Long about 6:02 A.M. I said to myself ‘This is the work for me.’ ” Hamelman grew up in New York and Pennsylvania; he trained in Germany before opening shop in Vermont. He then went on to become one of the United States’ only certified Master Bakers and a beloved teacher and director of King Arthur Flour for over three decades. His affection for bread is vast: “I love bread. I love straight doughs, sourdoughs, seeded breads, breads with fruits and nuts, flatbreads, egg breads, rolls, braids, giant loaves, baguettes, round and oval loaves. If a bread is made with respect for fermentation and ingredients, if it’s made with care and authenticity, then I think it has a place in our collective bread basket.” Such an egalitarian take on bread is refreshing in an industry that has the tendency, like so many others, to slip into divisiveness and prescribed standards.

Aside from the technological implements at play, this is, of course, not new. For the rise of anything to a trend a fresh element of veneer and hierarchy must be introduced, and the number of characteristics defining what’s fashionable shrinks. And should the gluten free craze have you fooled, let me assure you: bread is trending. The “new guard” of artisan baking (arguably kick-started by Tartine‘s Chad Robertson) is marked by certain telltale traits: very wet doughs, which are more difficult to work with and more likely to produce an irregular, hole-filled interior crumb; extended fermentation time, which increases digestibility and chew; regionally-sourced grains which are more flavorful, nourishing, and sustainable, but also more expensive and inconsistent. Though these elements do make great bread—I’m admittedly a fan of them all—they’re also potential stepping stones to the tapering of bread culture, creating firm definitions of what makes something “good”.

Hamelman remains democratic about it, musing that “as Professeur Raymond Calvel said so aptly, ‘La vérité sort du four.’ The truth comes out of the oven. If the breads are better—please keep it up.” But he also underscores the value of intention: “Ultimately, we should all begin with asking ourselves ‘what are the flavors I am seeking in this bread when I pull it from the oven?’ And starting there, we choose ingredients, mixing technique, hydration, fermentation, final proof method, oven temperature, and duration of bake.”

Starkly un-millennial, Hamelman, now 67, has worked the same profession for over 40 years and has not bent to the will of social media. He is steady and studied. His understanding of the craft is based on personal experience, not public taste, and has developed through experience, not simulation. In reference to learning from YouTube, a tool many use today to gain new skills, he says, “I wonder if I could learn as well if that were my route. Maybe it’s generational, or simply a function of my own early experiences, but watching YouTube would seem somehow two-dimensional to me compared to the three-dimensional face to face engagement that characterized my learning.”

Of course, the internet has had untold and surprising effects on the way we make and understand food. While YouTube promotes remote learning, Instagram promotes aesthetics as a primary incentive for production, like the in-vogue “open crumb,” resulting from very wet dough. Until recently, it was primarily circumstance and resources that determined why and how we made things. I was reminded of this when Hamelman told me about a baking event he attended in Spain a couple months back. “A wonderful guy from Galicia, in the northwest, where the climate is more like Ireland, made a bread that had over 100% hydration. As he explained, in Galicia, little wheat grows, so bakers developed a tradition (unlike anywhere else in Spain) of mixing their dough with a very high hydration in order to stretch the wheat. A perfectly logical way to adapt to local conditions, no?”

I was curious if Hamelman, having seen the industry change through the decades, thought that America was finally developing its own bread culture amidst this new baking enthusiasm. “Yes, I do,” he said. “What we do worst in the US is also what we do best. By that I mean, since we do not have an intact, centuries-old food culture, we dash from one crazy diet obsession to the next every five years. First we vilify fermentation or white flour, then we vilify whole wheat flour. But on the good side, we can do things in baking that are very rare among European bakers—we can see products from France and say ‘oh, I want to learn how to make that,’ and then see something from Germany and say the same thing.”

Regionality is an element of bread making whose value can’t be understated. Almost every culture has some kind of bread that marks their culinary and, in turn cultural, identity. As Hamelman points out, the US has always been an anomaly in this regard, for the most part borrowing and adapting other nations’ bread traditions in order to make our own. Bread, despite its sweeping title, focuses mostly on recipes of European descent, with a Eurocentric bibliography to back it up. Only two breads in the book, simit and lavash, hail from outside Europe or North America. Hamelman’s recipe for simit is an adaptation of one he first encountered in the 1980s, but it differs from traditional versions I’ve found. Simit is a well-known Turkish street snack, nationally beloved regardless of age or income, which can be found at carts or piled high on the heads of vendors known as simitçi throughout the footprint of the Ottoman Empire. Sticking with tradition, Hamelman’s recipe has the recognizable round shape and sesame seed coating, but it lists a high quantity of butter (similar to a European enriched dough) and the conspicuous lack of traditional pekmez, a Turkish grape molasses considered by many to give the bread its characteristic crispy exterior. It struck me that while inclusion was once gesture enough, cultural representation today requires acknowledgment of authenticity and authorship. To include a recipe without recognizing our relationship to its origin is no longer sufficient.

Without question, bread is a sly and able translator. Its story is even better told when in the hands of a baker and writer of similar qualities, whose recipes and approach supplant ego with curiosity. “The world of bread making is never static, it’s constantly fluid and evolving,” Hamelman says. “I’m simply part of the current incarnation of that, and I fully accept the ephemerality of not just every bread I make, but also of my current “status” as a baker.” As someone still unsure of my relationship to baking, I appreciate this notion that we can move in and out of roles as we explore the nuances of the world around us. And while bread has pretty much always been around (even if a single loaf we make won’t be), it’s also, like many of us, a morphing contradiction. Working with Hamelman’s book reminded me of bread’s duelling simplicity and convolution, its intimacy and universality, its permanence and ongoing transformation. We may have a ways to go and a fight to keep on, but it’s worth saying once in awhile, in Hamelman’s words, “Three cheers for evolution.”