The first page of my SAVEUR Cookbook Club pick for December, Adventures in Starry Kitchen, starts with this line: "Hi, I'm Nguyen. I'm no one special."

This may seem like an unconventional way to start a book that highlights recipes from your critically-acclaimed Los Angeles restaurant, but this is really how chef-author Nguyen Tran approaches his cookbook—it's something that is relatable to anyone who has ever set foot in a kitchen with the intention of cooking something. He's not a chef in the chef-with-a-capital-C way. He admits that he "grew up on chips and queso, hamburgers and hot dogs, and other kinds of standard American fare" and he calls himself "the biggest fuckup" he knows. His debut book is fittingly peppered with various mistakes and missteps. 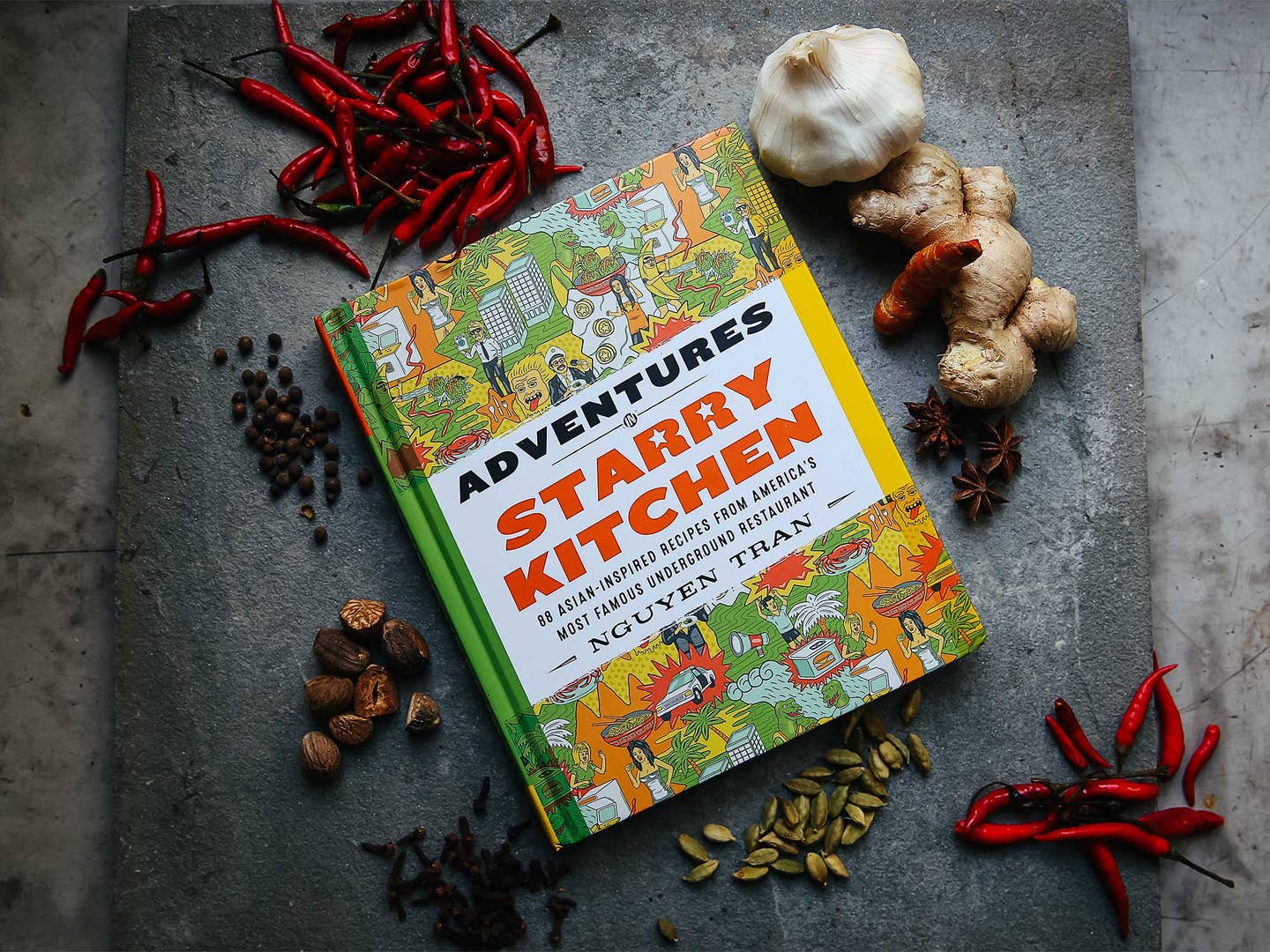 It all started a few years ago when Tran's wife Thi lost her job and their friends convinced them to start cooking. They started advertising through fliers and Facebook, and eventually their lunch-service restaurant turned into an also-sometimes dinner service restaurant. Then came the five-star Yelp ratings, some media attention, and then the Health Department, which ultimately led them to operate in "black-ops mode," as Tran calls it. Fast forward six years and they have a perfectly legal brick-and-mortar spot in Los Angeles called Button Mash, and have tried a few additional projects (including serving their famous tofu balls at Coachella).

Below, after spending the month cooking his recipes, I talk with Tran about his book and his infamous banana suit (it’s just a thing he does).

What made you decide to write the book the way that you did?
My favorite cookbook was the Momofuku cookbook. It was a good read, and the recipes are good too but it's a really good read. It was really inspiring to read it. So when I pitched that idea to the publisher, I said I love the stories. It's like a memoir, that's what I want the book to be, and I didn't want it to look like anything else out there either, that's why it has crazy art. There's no picture of me on the cover—who wants to see a picture of me? What does that inspire in someone? And that is indicative of what you read in the book. It's hard because I have somewhat of an ego, but I've also been humbled and humiliated by this industry so much so I've come to a balance, and I hope the book is indicative of this.

When you first started having people over at Starry Kitchen, did you think it was going to grow into what it has?
No, absolutely not. I had no idea what would happen. The only thing that I possibly planned was I said we have to give this thing a name because if it works, we're going to be stuck with it. Some people say this was all very haphazard, but at this point in my life, you can't predict everything. You know when you were, like, a teenager and you apply for a job and they ask what your five year plan is? I think it's the most condescending question. I had no idea, and I don't know if there's any way to convey that to anyone. We didn't think we'd be restaurateurs, I didn't know about banana suit, I didn't know about Button Mash, and I'm very very very appreciative of everything. We failed upwards.

What went through your head when the health department came the first time?
So I feel every person has that friend that weasels their way out of everything. I'm that friend. I'm that person who thinks they can talk their way out of everything, it's all through this line of logic that will get everyone off the hook. The minute we got caught, I was ecstatic, I was like, "Holy shit, this is the minute I've been waiting for, this is our minute of legitimacy." But my wife was pissed, she was livid, saying, "I told you this was going to happen." It was part of the conversation when we started the restaurant. The first question was what if we get caught? My answer was don't worry we'll figure it out, then we got caught and I was so happy.

In my head I thought about how i was going to do it. I announced that we’re closed, and here are the new rules, but we’re not telling anyone publicly. I see the narrative happening in my head really quickly, and when it happened, I thought, oh my God I’m going to have so much fun, and the people in the story are going to have even more fun. So we have a password, and we won’t let just everybody in. We were on the second floor of our apartment building, so customers had to buzz in, and we made the passwords really ridiculous: “10 caps of Viagra, will you let me in?” I wanted to make people say really ridiculous things. I think life is too short to not have a little fun.

Can you tell me more about your customer's reactions to the fact that you were "closing?" How did the atmosphere change pre/post close?
Before I give you the reaction, it's important when you're shepherding people to give as many answers as possible to the questions that will pop up, because if you don't, sometimes those questions will consume your mentality. You have to answer the what ifs—they're what holds us back in life a lot of times. What if we fail? What if it doesn't taste good? What if this place is bad? Maybe I should go to McDonald's instead because I don't know what to expect. I wrote an email to answer those questions and control the narrative.

I actually thought I’d work in politics before all this. I can really work a room. I wrote an email that shepherded that narrative so I controlled it again. “We got caught, this is what we’re going to do. Here’s the emergency plan: act like nothing’s happening. Here are the new rules.” And the response was resoundingly, “Let’s go for it.” I don’t think I expected that. There were probably three different times in the apartment that I thought we were just totally shut down, but it did make us bigger because we got caught and we became subversive, because the Health Department caught on to us. People had been following us for months, then they saw we got caught. Then the emails [from Tran] were like, “What if i told you we weren’t shut down?,” and people were like holy shit. They were in on the joke. They were in on something special.

You have to take into consideration the time in history. We were a year into the fall of the economy, and people were very lost. There was lots of fear going on out there, so any kind of connection, I think, it’s something that we yearn for. And in the city of LA, we pride ourselves in finding all the latest and greatest. It’s really fad driven, and it had to be a cheap fad, like kobe $2 tacos. That’s a very low barrier of entry for people to do that and then experience city in the way they want and not break the bank. So the timing helped us a lot and making it illegal and underground also helped.

Where's the weirdest place you've worn the banana suit?
The weirdest place? When we shot the book, when I convinced my publisher that we had to go to Asia, I knew I'd bring it and wear it in nine different countries. I wanted to wear it and take pictures that people wouldn't expect.

We were in the oldest market in what western maps call Ho Chi Minh City, or Saigon, the old capital of Vietnam, and I wore it there. The minute I wore the banana suit in the oldest market in all Saigon, it somehow aroused the women in the market. They started prodding me with metal poles in my penis a lot, and that was really weird! I’ve seen those videos of women walking through New York and getting catcalled, this was the closest thing to that. It was so fucking weird.

Is there anything you miss about having an illegal kitchen?
I miss the intimacy of it. It was like, we can fit 10 people comfortably, and 35-40 uncomfortably. We got to know every person. There was no line cook, no sous chef, just us and them. We made connections with friends and new friends. It's very nostalgic for me. The new group of friends we met, they were all these graduates from Carnegie Mellon, and there were all these alumni with them. They helped us to explode the most. I'm still friends with all those guys. The fun part was every time they brought someone new, it was like story time. We were sitting around the campfire, and I was that guy who had the verbal history of Starry Kitchen. It was really fun, and that's why book is really fun for me too. I'm happy to share. We tried to resurrect it after we started our restaurant, but it's not the same. Things that happened in our life were meant to take place at that point in time. We needed to make money, we were in the mentality of reinvention, and to go back to it—it's kind of like, oh yeah, we've got our real restaurant, and it's kind of cool, but when we got that apartment 5 years ago, I was overcome with emotion. I've been humiliated and humbled so many times, I'm just an emotional wreck now.